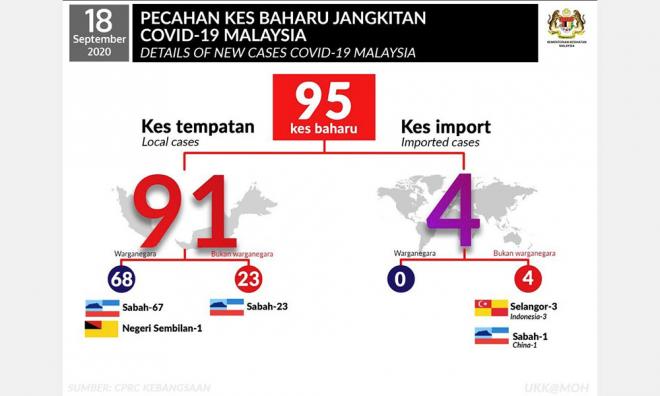 COVID-19 | Malaysia has reported 95 new cases of Covid-19 today, of which 91 cases were locally transmitted while the other four were imported.

Sabah accounted for 90 of the local cases, which includes one case where a patient died before undergoing a Covid-19 test. The one other local case was in Negeri Sembilan.

In a statement, Health Ministry (MOH) director-general Dr Noor Hisham Abdullah said the deceased (Case 10145) was a 50-year-old Filipino woman who started experiencing symptoms of cough and breathing difficulties on Sept 14 and had sought treatment at a healthcare facility.

“She was then referred to Semporna Hospital for further treatment, but she did not go due to some difficulties she was facing.

“She was found unconscious and was later brought to Semporna Hospital, Sabah, where she was confirmed dead on Sept 14. Screening revealed that she was positive for Covid-19.

“The MOH sends its condolences to her family,” he said.

When asked for clarification, an aide to Noor Hisham confirmed that the woman had sought treatment at a private clinic earlier in the day on Sept 14, but died later that night.

The new death brings Malaysia’s Covid-19 death toll to 129. The last time a Covid-19 death was reported in Malaysia was on Sept 1 involving a 80-year-old woman in Penang.

In addition, Noor Hisham said a close contact of Case 10145 has also tested positive for the disease and has been admitted to the Tawau Hospital.

As for the other new cases reported in Sabah, 76 were attributed to the Benteng LD cluster which is centred in detention facilities in Tawau and Lahad Datu, which brings the total cases for the cluster to 550.

The cluster appears to have spread to Sandakan where one case was detected involving a former detainee, but most new cases were still being detected in Tawau (66 cases) and Lahad Datu (nine).

In Lahad Datu, one of the new cases involved a detainee, one involved a teacher, three were police officers, and four were children.

In Tawau, 28 of the new cases were prisoners, but the remainder were close contacts of prisoners, prison officers, and their families.

There are 7,814 people who were tested in this cluster so far, of whom 1,838 were still waiting for their test results.

Another four new cases were attributed to the Pulau cluster that was first discovered after the index case was found unconscious at her home in Kunak, bringing the total for that cluster to 14 cases.

One of the new cases detected today was in Kunak, while the other three were in Semporna.

There were 345 people tested in this cluster, of whom 268 are still waiting for their results.

Three cases were attributed to the Selamat cluster that was first detected after a woman was admitted to Tawau Hospital for premature birth, bringing the total for the cluster to five cases.

There were 137 people tested in the cluster so far, of which 132 were still waiting for results.

In addition to the three clusters and the new death, several sporadic cases have also been reported in the state.

They were screened at the Lahad Datu Hospital for severe acute respiratory infection and were found to be positive for Covid-19.

Another two who showed symptoms of the disease were screened, tested positive, and were admitted to Tawau Hospital.

Meanwhile, in Negeri Sembilan, the new case reported today was a crew member of a ship at Port Dickson, just like all 10 other cases reported in the cluster so far.

Noor Hisham said 59 people have been screened in this cluster, and all tests have been completed. However, contact tracing and active case detection were still ongoing.

As for the four imported cases, three were undocumented migrants from Indonesia to Selangor, and one case from China involved a ship crew member in Sabah.

In the meantime, 14 people have recovered from the disease and have been discharged.

There are 11 patients being treated in intensive care units, most of whom (eight cases) are part of the 65 cases in the Sungai cluster in Kedah.