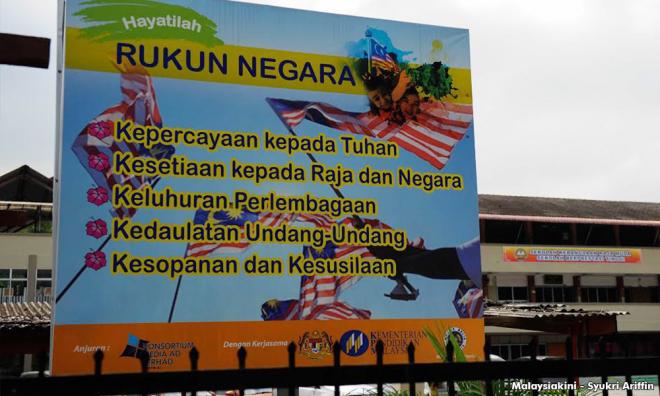 YOURSAY | 'Morality starts from the top, not the bottom…'

This "Unity Month" is the only period in the year when our politicians promote peace, understanding and unity among all Malaysians before going back to promoting racial and religious division for the rest of the year.

I can say that almost all Malaysians adhere to the Rukun Negara principles, which have been instilled into the Malaysian soul. But there is a caveat to following these principles - they do not apply to PN politicians who openly flaunt and go against this nation's hallowed principles.

A new addition to this group is Plantation Industries and Commodities Minister Mohd Khairuddin Aman Razali, for breaking the Covid-19 quarantine protocol and is now hailed as a hero by his party, PAS.

On disregarding the “Kesopanan dan Kesusilaan” principle – well, there is Pasir Puteh MP Nik Muhammad Zawawi Salleh from PAS, who is now an expert in telling non-Muslims how to practise their faith.

Not to mention the gang of Umno hecklers in Parliament - Pasir Salak MP Tajuddin Abdul Rahman, Azeez, Bung Moktar and the rest.

Rupert16: Our Malaysia Day wish is for the people in power to:

1) Respect and not insult other people’s religion and culture.

2) Not practice double-standards in the application of the law, that is, equal justice for all, regardless of position.

3) Care for all Malaysians and not only a certain race.

4) Craft government policies to help the poor, regardless of race or religion.

There was at one time a National Unity Department under the Prime Minister’s Office. Nothing came out of it.

Politicians talk about unity only during Merdeka Day, Malaysia Day or when talking to an audience at an ethnic minority festival. Other than that, they indulge in playing racial and religious cards to fish for votes.

As long as there is no political will to forge unity, this call for racial harmony is just empty rhetoric.

R Venugopal: Indeed, this is all talk and nothing else, usually in August and September of every year.

Thereafter, the true colours are shown by all leaders, where their priority is about race, religion and power. Every time, the words used by politicians are “bangsa dan agama” (race and religion) but not about unity or harmony.

For the last 60 years, unity has been superficial - just holding gatherings during each festive season, which are funded by taxpayers. Real unity only appears when all are treated as Malaysians.

ProMalaysia: Betraying the voter’s trust and becoming a ‘pengkhianat’ (traitor) prime minister is definitely against our Rukun Negara principles.

How are you going to ask the rakyat to practise the Rukun Negara when the leaders are the ones breaking its principles, like indulging in corruption, owning hundreds of Birkin bags, treating 1MDB money as one’s own, etc?

Morality starts from the top, not from the bottom.

FairMalaysian: Yes, maybe you should start with the one who said he is a Malay first. Next, dismantle all single-race parties, starting with Umno.

We, the common people, are getting along fine but these rascal politicians are the ones splitting the society for their political gain.

He came to the people, a multiracial crowd, seeking their votes. They gave their votes to him but he showed his true colours after winning. He abandoned those who elected him and his reason - Malays and Malay unity is more important than Malaysian unity.

Cheeky, isn't it? And you know what - when he became the backdoor prime minister, he declared he is the prime minister for all Malaysians. Figure out then what is so wrong with this country.

Thesaint: I think most Malaysians still have the Malaysian spirit. On a daily basis, you still see so much camaraderie among the middle and lower class.

People stop to help in an accident, to help old or disabled people to cross roads, give to charity or donate when they read of someone’s plight in the newspapers. The list goes on and on, irrespective of race or religion.

It’s probably about 20 to 30 percent, especially the richer segment of all races - those whose survival depends on the politics of race and religion - who do not subscribe to the spirit of the Rukun Negara. My only concern is this segment may be getting bigger.

It’s time the 70 percent of us show the rest that there is greater joy in living in harmony, respecting one another’s religion, upholding the rule of law irrespective of whether the person is a minister or otherwise, respecting the Constitution, including the role of the monarchy to be the custodian of the nation, and all things that bring a positive outcome to us as a nation.

PeakyBlinder: To me, patriotism is more than just being aware of the Rukun Negara. It takes a true sense of understanding of our identity as Malaysians.

When people don't have a sense of attachment to their home country, it's hard to expect them to keep to heart a few paragraphs of words.

BlueBison5323: One of the Rukun Negara principles is Kedaulatan Undang-Undang. So when are you going to charge that minister who broke quarantine? Walk the talk.

The goodness of a pudding is in the taste, not the decoration.