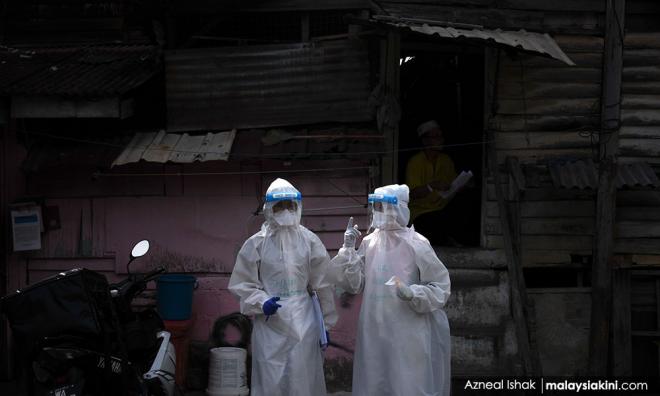 COVID-19 | Malaysia has recorded 57 new cases of Covid-19 today, of which 51 cases were locally transmitted and six were imported.

Sabah again accounted for most of the local cases with 49 new cases detected there. This included the newly discovered Quarters cluster in Tongod, Sandakan - the sixth cluster reported in Sabah this month.

Health Ministry director-general Dr Noor Hisham Abdullah said the Quarters cluster was first detected when a healthcare worker in Tongod was referred to a hospital to undergo testing with a Covid-19 antigen rapid test kit (RTK-Ag) on Sept 4.

The test came back positive, but confirmation testing using the more sensitive reverse transcription-polymerase chain reaction (RT-PCR) test later gave a negative result. In the meantime, testing of the local community in Tongod was underway.

“Screening around the Tongod district began on Sept 6 involving the local community including workers at a health clinic there. Five Covid-19 cases have been identified to date.

“All the positive cases (Case 10253 to 10257) are citizens. They do not show symptoms and have been admitted to the Duchess of Kent Hospital, Sandakan, for treatment,” he said in a statement today.

Noor Hisham added that 117 people have been screened in the Quarters Cluster to date, of which 112 are still pending results.

“The source of the infection is still under investigation,” he said.

The Tongod Health Clinic, meanwhile, will be closed until the completion of decontamination and sanitisation works, and patients with appointments at the clinic have been referred to nearby health clinics.

Since the Benteng LD cluster in the Lahad Datu district was first reported on Sept 1, multiple Covid-19 clusters and sporadic cases have been detected in Sabah.

Apart from the two clusters mentioned, there are also the Selamat cluster, Pulau cluster, Bakau cluster, and Laut cluster.

For today, Noor Hisham said 14 cases have been reported in the Pulau cluster, 12 in the Selamat cluster, and another five in the Benteng LD cluster.

Outside of these clusters, screening for various reasons have yielded another 13 sporadic cases of Covid-19. The breakdown of these cases are as follows:

· Screening of trainees at a rehabilitation centre – two cases.

· Pre-surgery screening at Likas Women and Children’s Hospital – one case.

· Screening of influenza-like illnesses at the Tawau Health Clinic – one case.

· Screening of healthcare workers at Lahad Datu hospital – one case.

Meanwhile, outside of Sabah, one case has been reported in Kedah that is attributed to the Sungai cluster.

Another case has been reported during pre-surgery screening at Kuala Lumpur hospital, but is classified as a Selangor case.

As for imported Covid-19 cases, three have been detected among undocumented migrants from Indonesia.

The remaining three cases involve travellers originating from the UK, Pakistan, and Zambia.

There are 40 people who have recovered from Covid-19 and were discharged today, leaving 751 cases still active in Malaysia.

Of these, nine are being treated in intensive care units, and two also need a mechanical ventilator to breathe.