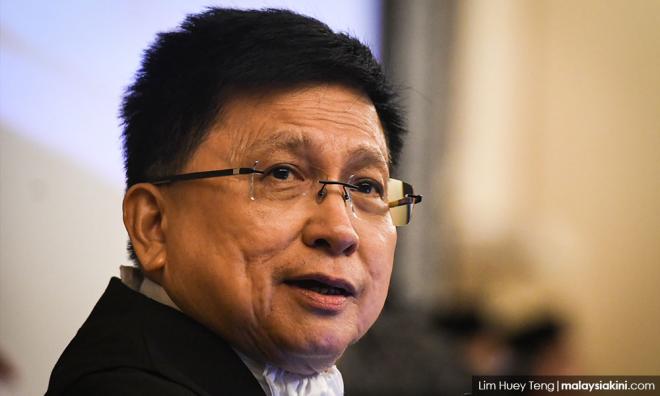 SABAH POLLS | Former chief justice Richard Malanjum has urged Sabahans to reject the state's former administration that had ruled Sabah for 55 years but did little to develop the state.

In a video clip uploaded onto social media yesterday, Malanjum, who was once touted to be a Warisan candidate for the Sabah state polls, openly canvassed support for Warisan.

"My fellow Sabahans, I am not a politician. I am a pensioner. Why do I address to you today? One simple reason, I do not want to leave this world feeling guilty for not doing anything for my fellow Sabahans," he said in a sincere and powerful tone.

"That's the reason why I came out in the open to say why we must make a wise decision in this election," said Malanjum, who is also a Sabah voter himself.

"If one is to go not that far to Pitas or upper Moyog, one will see things have not changed much particularly in the northern region of Sabah and Pitas," he said.

"They are still as poor as before.

"Shafie Apdal had been given the mandate to govern but they were not allowing it. They wanted to come back again. Are we to allow them to come back and continue what they had been doing to us for the past 55 years?

"Why are we taking back an old horse who had governed us for 55 years and literally did little for Sabah other than, if I may say, taking care of themselves probably.

"We have suffered. Are we willing to let our children and the generations to come suffer? With this group continuing to rule us in that fashion?" questioned Malanjum.

"Do not allow ourselves to be easily convinced by the so-called leaders who are merely the puppets of the Malaya politicians," he added without naming any local parties.

"Vote wisely. Vote for Warisan Plus. Give them a chance for at least another five years, (vote) for a change," he said.

Malanjum reportedly also campaigned for Warisan's ally Upko in Kota Belum on the second day of the current election campaign.

Sabah goes to polls this Saturday.

The incumbent state ruling coalition Warisan Plus is locking horns with Gabungan Rakyat Sabah which comprises of Perikatan Nasional, BN and PBS.