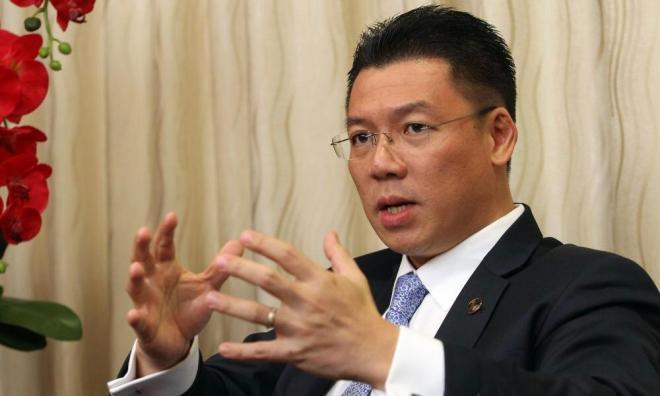 "The elders would say if we talk about our nightmare, it would not become a reality. Yesterday, I had a nightmare that BN won the Sabah polls and Bung is the new chief minister.

"If this indeed happens, how can Sabahans hold their head high? Where is their dignity?" he told over 200 supporters and voters at a ceramah held in the urban seat of Luyang, Kota Kinabalu.

"Another thing is that who is the new state governor? I heard many say it will Musa (Aman)," he said.

"Musa does not contest in the state polls and he is not out there causing a mess. So, a deal could have been struck behind us. What deal is that? It could be that of the state governor (post)," he said.

The ceramah was mainly attended by the middle-aged and elders who often nodded and applauded when the DAP leader spoke. Many of them were also reading the propaganda leaflets handed out to them.

They were patiently waiting for DAP secretary-general Lim Guan Eng and the Warisan Plus candidate for Luyang and incumbent lawmaker Phoon Jin Zhe to take to the stage.

Luyang has the highest number of Chinese and Sino-Kadazan voters in Sabah, recorded at 80.5 percent, followed by Likas at 78.1 percent. Both Luyang and Likas are traditional DAP strongholds.

Lim, in his speech, said Sabahans must show Prime Minister Muhyiddin Yassin their dissatisfaction for mulling not channelling more allocations to Sabah if Warisan Plus wins the state polls.

"How dare he threaten not to allocate funds for Sabah? There is no Malaysia without Sabah. Sabah, Sarawak and Malaya formed Malaysia. Show Muhyiddin some colours. Do not bully Sabahans, we have our dignity," he said.

Meanwhile, Kok told the Chinese voters that their caretaker chief minister Shafie Apdal was a rare moderate and open-minded Muslim leader in Malaysia.

Speaking in Mandarin mixed with the Hakka dialect which is widely spoken by the local Chinese and even the bumiputera, Kok said DAP leaders in the peninsula had to be extra careful with their statements due to the racial and religious issues harped on by their political opponents.

"It's very rare for us to see an election campaign featuring a political pact that is here to build a country instead of building up a religion or a race.

"It is very rare for us to see an open-minded Muslim bumiputera walking the talk and pushing for multiracialism and multi-religiousism. We need to be respected and your chief minister is doing that," she said.

"He was daring and he went to the launching of a hall at a Catholic church. I don't think Musa had done so or Bung would do this," added Kok.

"Chinese voters in Sabah are only 10 percent [...] if we do not vote for Warisan Plus, what is our choice then?" posed Kok.

Nga resigns as deputy speaker ahead of vote to remove him
13 Jul 2020
Nga : I will not stay a minute longer if voted out as deputy speaker
7 Jul 2020
Nga calls for Putrajaya to intervene in T'ganu's gender segregation in cinemas
5 Jul 2020
PM submits motion to replace Speaker Ariff, Deputy Speaker Nga
27 Jun 2020