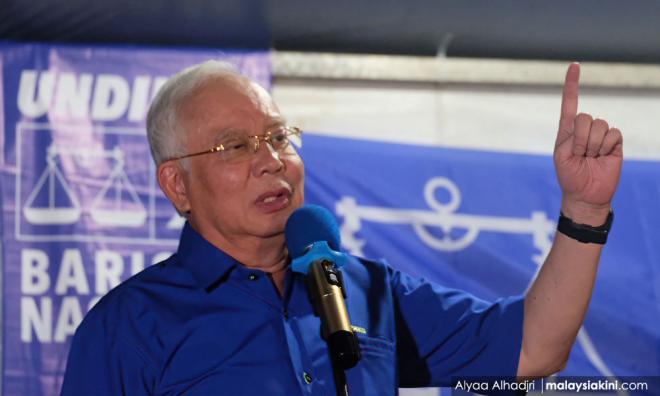 Speaking to Malaysiakini, Najib said he believed the majority of voters in Sabah had already made up their minds prior to PKR president Anwar Ibrahim's announcement yesterday claiming "strong support" from parliamentarians for him to become the next prime minister.

"I think people have already made up their minds.

"And I think they have a sense of what is good for the future of Sabah," said Najib, when met in Batu Sapi after he appeared on the campaign trail for BN's N53 Sekong candidate Hasulizah Dani (below, right).

Responding to Anwar's announcement, BN and Umno president Ahmad Zahid Hamidi said "many" MPs from his coalition and party have voiced support for Anwar to form a new government.

Online portal The Vibes later quoted Umno sources who revealed that there could be up to 15 MPs from the party who backed Anwar.

"There are Umno backbenchers who are not happy with how Muhyiddin is treating the party. We do not have to support someone who has no respect for our party.

"There are MPs who are unhappy, and they do not have loyalty to the prime minister. Certainly more than 10 (lawmakers)," the former Umno minister reportedly told The Malaysian Insight.

Asked on the matter, Najib said he was not aware of any of the supposed MPs supporting Anwar while stressing that he personally remained loyal to Umno.

"It is speculative at this stage. What is important, we are all party members.

"I am a party man. Whatever will be decided by the party, I will support that," said the Pekan MP.

On Zahid's statement, Najib said: "Well obviously there might be MPs who are in that category."

"But what is important is the decision of the party.

"Let us wait for the time when we will make an official stand on this issue," he said.

Earlier in his speech, Najib recounted the BN federal government's contributions to Sabahans during his time as prime minister.

At one point, Najib asked the youths in the crowd of some 100 people what they wanted, and appeared taken aback when the response came, "nak kawin!" (to get married).

Hazulizah's bid for the Sekong seat was also backed by Umno's machinery from Kelantan, under the leadership of Machang MP Ahmad Jazlan Yakub as the state's liaison chief.

Jazlan (photo), in his speech, also denied rumours that he was among the Umno MPs said to have backed Anwar's bid to oust Muhyiddin.

"If I support this prime minister from fairyland (kayangan), I wouldn't be here on this stage tonight," said Jazlan.

While Nazri reportedly said he would remain loyal to Zahid as Umno president, Jazlan stated tonight that he would be following Najib's lead in the event of any voting called in the Dewan Rakyat.

"If you were to ask me where I stand...wherever 'Bossku' go, I will follow.

"Even if he is no longer the prime minister, Bossku is still my boss. Datuk Seri, you can answer where Machang's vote will go," said Jazlan.

Muhyiddin has so far maintained that he remains as prime minister until proven otherwise, and challenged Anwar to prove his claim that he has secured a majority in the Dewan Rakyat.

Muhyiddin, throughout his campaign trail in Beluran and Sandakan today, had reiterated the importance for Sabahans to elect a PN-led state government, hinting it would facilitate the distribution of additional assistance beyond what is already provided for under the federal constitution.