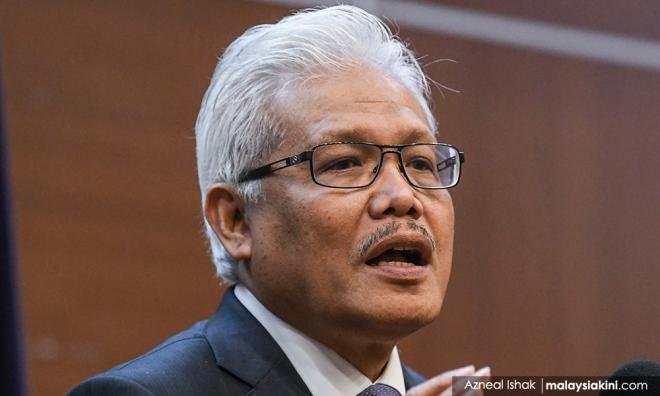 Hamzah explains 'vote to get rid of immigrants' remark

SABAH POLLS | Home Minister Hamzah Zainudin has clarified his remarks allegedly uttered when urging voters to support a PBS candidate if they wanted to rid Sabah of undocumented migrants.

Upko had alleged that Hamzah (above) had threatened not to act against the migrants if PBS' Joniston Bangkuai lost in the Kiulu state seat.

Speaking to reporters today, Hamzah said this was not what he had said.

"No, no, no. If you look at my video, it is so simple. I said that I’ll send Joniston to make sure that he will come and tell me whether they (the undocumented migrants) are there or not.

"If he is not the winner, then I will have to choose someone else," he added.

Malaysiakini has reviewed footage of the ceramah on Sept 19.

Hamzah's remarks starting at the 34th minute are as follows:

"But before I can send (Joniston) we have to make sure he wins, right? How can I send someone who has been defeated?"

Hamzah told reporters today that no matter what, he would still take action against undocumented migrants.

"We have already done it (deported undocumented migrants) but to me, who should be the Kiulu representative?

"It is better if they (the voters) decide to give (the seat) to Joniston. Is that wrong?" he said.

Kiulu is a six-way bout with Joniston as the incumbent.