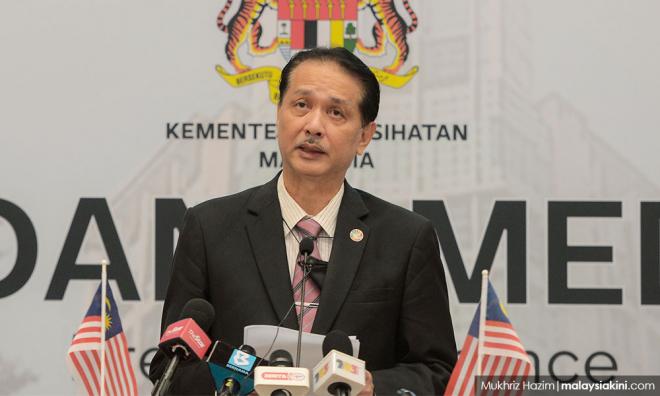 COVID-19 | Malaysia recorded 111 new cases of Covid-19 in the 24 hours up till noon today, most of which were attributed to the Bangau-Bangau cluster in Semporna, Sabah.

Health Ministry director-general Dr Noor Hisham Abdullah said that of the 111 cases, four were imported while the remaining 107 were locally transmitted.

Sabah accounted for most of the local cases with 97 reported, 74 of which were from the Bangau-Bangau cluster.

This brings the total number of cases in this cluster to 134 out of the 180 people tested. Nine are still pending their test results.

This means that more than three-quarters of all tests in this cluster have come back positive.

When contacted, Noor Hisham told Malaysiakini that the new cases were detected among close contacts.

“The virus is already in the community and villages,” he added.

The cluster was detected during pre-admission screening at Semporna Hospital on Sept 22, which found five cases that day. Eight more were detected on Sept 28 plus two others who previously tested positive but were not identified as part of the cluster at first.

Yesterday, 47 new cases were detected, all of whom were from the same village as the previous cases.

Noor Hisham said 10,634 people have been tested in this cluster with 833 of them still awaiting their results.

Two of the new Benteng LD cases were detected in the Kinabatangan district which was still classified as a green zone as of yesterday but will now be considered a yellow zone.

The Laut cluster in Kunak has two new infections, bringing the total to 24 cases.

In this cluster, 533 people have been tested so far, 156 of them are still pending results.

There were also eight cases in Sabah today that have not been linked to a cluster:

In Kedah, seven new transmissions were reported from the Sungai cluster, and another case was found during a screening of patients with severe acute respiratory infection at Sultanah Bahiyah Hospital, Alor Setar.

Pahang and Selangor reported one case each when patients began reporting symptoms following travel to Sabah.

As for the imported cases, a new but isolated cluster was identified in Johor that involved a ship docked at Pasir Gudang Port.

Noor Hisham said the index case of the Orkim cluster (Case 10572) is an Indonesian citizen who signed onto the vessel in Singapore on Sept 10.

He began to show symptoms of fever, cough, breathing difficulties, diarrhoea, and vomiting on Sept 13 but did not report this to his employer. He signed-off on Sept 17 but only sought medical treatment on Sept 22.

He was then referred to Permai Hospital, Johor for treatment where he tested positive on Sept 23, and then transferred to the Enche’ Besar Hajjah Khalsom Hospital.

Following this, screening of other crew members identified another case that is also an Indonesian citizen.

So far, 30 people have been screened, of whom four are still pending results.

As for the other three imported cases, two originated from Indonesia including one undocumented migrant.

Another case originated from India.

There were also 30 recoveries reported today and the patients have been discharged, leaving 858 confirmed cases still active in the country.

Four of them are being treated in intensive care units including three who need ventilator support.