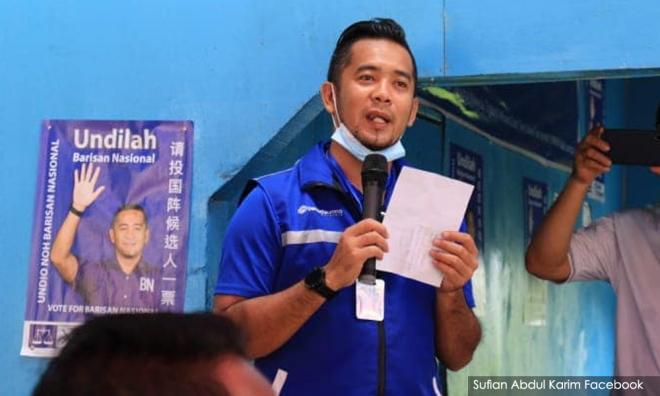 BN Pitas candidate has Covid-19, Zahid and Asyraf in quarantine

Despite this, he called on party supporters to keep their spirits high during the Sabah state election as he apologised for any inconvenience caused by his infection with the novel coronavirus.

"I, Sufian Abd Karim (above), the BN candidate for N03 Pitas have just gotten the test result for Covid-19 and have been confirmed positive.

"Apologies for all the difficulties. May it not break our spirits in this struggle," he said in a Facebook post today.

Sufian went on to urge all those who had close contact with him to get tested.

He also apologised to all the voters, staff, party machinery, friends and relatives who helped him throughout the campaign period.

"Pray that I will be given the strength to face this challenge and be given immediate healing," he added.

Hishamuddin, Bung and Zahid were seen wearing masks while with Sufian, but others were not wearing them.

Asyraf had also joined Sufian for a round of football with locals.

Apart from that, the candidate was seen in his campaign pictures visiting the homes of locals with his mask lowered and shaking hands with constituents.

Zahid shared that he was presently under home quarantine.

Taking to Facebook, he said he was monitoring the election results via video conferencing from home.

Asyraf told Malaysiakini that he was also under home quarantine in Kuala Lumpur and had so far tested negative for Covid-19.

“I have done two Covid-19 tests and thank God both were negative.

“(On) Monday I have to undergo another one,” he said when contacted.

He also confirmed that he had been identified as a close contact of both Sufian and Razlan.

Like Zahid, Asyraf said he was monitoring the election from home and urged the Umno Youth machinery to mobilise more young voters to hit the ballot boxes.