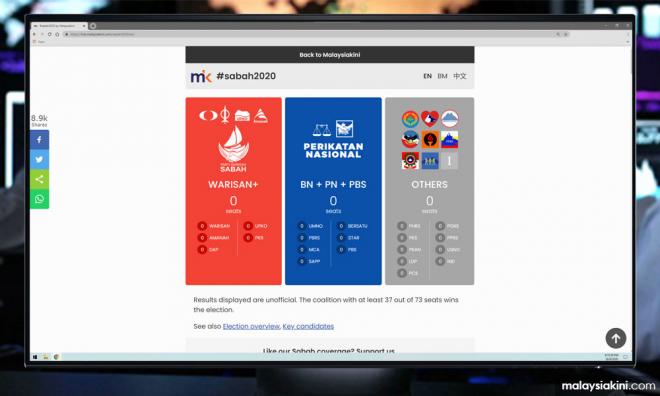 SABAH POLLS | Malaysiakini is providing live coverage of the results for the 73 seats in Sabah to determine if incumbent Chief Minister Shafie Apdal and his Warisan Plus alliance will retain power or if a new administration will take over.

Polling for the state election ended at 5pm and the Election Commission has started counting the votes.

The election was triggered when Umno's Musa Aman announced in late July that he had gathered enough support from Sabah representatives who defected from their parties to form a new state government, with him returning as chief minister.

However, his coup was thwarted by Shafie, who with the consent of governor Juhar Mahiruddin, dissolved the state assembly, paving the way for the snap polls.

The 14-day campaign witnessed allies clashing over seats and the chief minister post. Voter sentiments were whipped up over undocumented migrants in the state, the Covid-19 pandemic, local parties versus Peninsular parties as well as development issues.