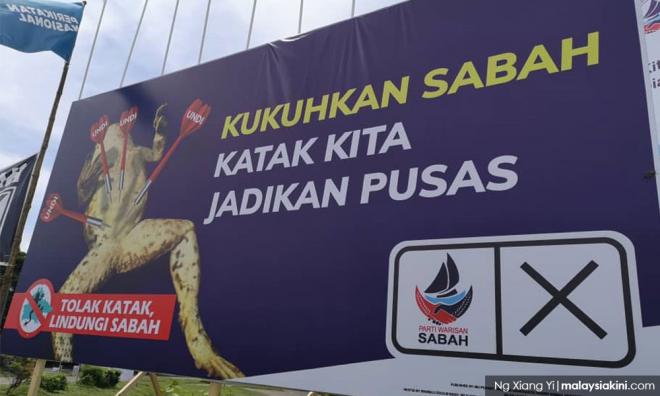 Sabah voters are kind to defectors

SABAH POLLS | A key component of Warisan Plus' Sabah campaign has been its call for voters to "slay" the "frogs" - the colloquial term for lawmakers who "hop" from one party to another.

In many parts of the state, billboards were erected urging voters to turn the defectors into "pusas", which is the local term for snacks.

In total, 19 state lawmakers who defected after being elected in 2018 stood for elections again yesterday.

The results showed that of the 19, only seven lost.

Two defectors who were picked up by parties to defend their seats and lost were Jamawi Ja'afar (BN-Umno, Melalap) and Abdul Muis Picho (PN-Bersatu, Sebatik).

In 2018, Jamawi won the Kemabong seat before defecting to Warisan.

For the election yesterday, Jamawi took on Warisan vice-president Peter Anthony, who was the incumbent Melalap lawmaker, who eventually won by securing 50.17 percent of the vote.

Masiung Banah will earn the distinction of being the only defector to win a seat as an independent. He retained the Kuamut seat which he has held since 2008.

In 2018, he won the seat on a BN-Upko ticket before defecting to Warisan soon after winning.

There were two defectors who were picked up by PN-Star, and both were successful at the polls.

Ellron Alfred Angin retained the Sook seat. He won the seat in 2018 on a BN-PBRS ticket.

Abidin Madingkir retained the Paginatan seat. He won the seat in 2018 on a BN-Upko ticket.

Only four candidates who defected in July during the events of the "Seri Anggerik Move", which triggered the election yesterday, managed to retain their seats.