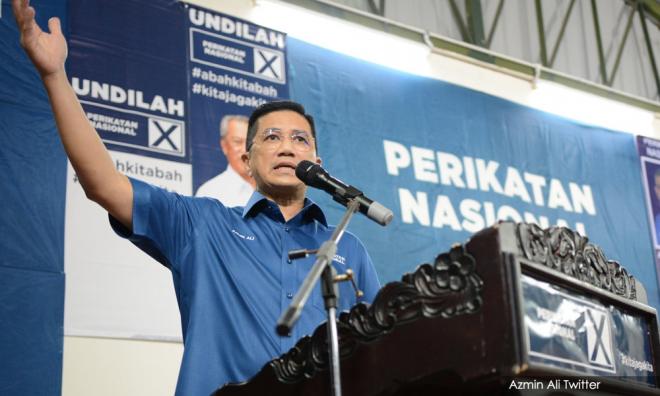 SABAH POLLS | The decision by the people of Sabah to vote in the Gabungan Rakyat Sabah (GRS) coalition proves the people's confidence in the leadership of Muhyiddin Yassin as prime minister, said Perikatan Nasional (PN) info chief Azmin Ali.

"The results of the Sabah State Election 2020 saw the maturity of the people of Sabah of upholding the spirit of federalism for the prosperity of the state and the well-being of the people.

"The mandate given by the people of Sabah clearly proves that the people choose a State Government that is caring, inclusive and guarantees state sovereignty and the security of the people," said Azmin in a statement this morning.

He also said the vote was a show of support for PN's cooperation within the GRS.

GRS, comprising PN, BN, and PBS - won the snap state election last night after securing 38 out of the 73 contested constituencies, which is a slim two-seat majority.

However, a candidate for chief minister has yet to be confirmed, with PN's Hajiji Mohd Noor and Umno's Bung Moktar Radin among the names being speculated on.

"It is with a full sense of tawadhu (humility) that PN will carry out this mandate with determination and commitment to generate development in the post-Covid-19 economy.

"In line with the Shared Prosperity Vision, the state and the people of Sabah will enjoy inclusive, equitable and quality development," added Azmin.

He said that the victory would galvanise PN towards stronger cooperation to build a dignified and united nation-state.