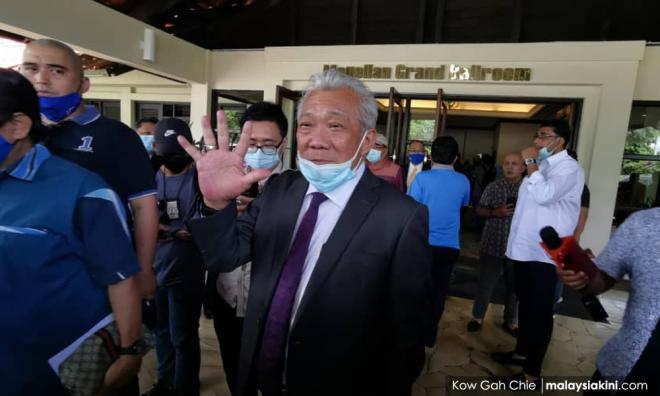 Sabah governor asks for time to decide between Bung and Hajiji

Sabah BN and Sabah Perikatan Nasional (PN) have apparently failed to reach a consensus on their chief ministerial candidate after a two-hour meeting today.

As such, Gabungan Rakyat Sabah (GRS) has decided to let Sabah Governor Juhar Mahiruddin choose the new chief minister, which is believed to be a decision between Sabah BN's Bung Moktar Radin and Sabah PN's Hajiji Mohd Noor.

After their meeting, the two men raced to the palace for an audience with the governor, only to be told that he needed more time to make his decision, which he said he would do as quickly as possible, according to Bung.

It is understood that in addition to the 38 seats secured by GRS in yesterday's election, the three independents elected will also lend their support to the new government, giving it a 41-32 majority over the rival Warisan Plus coalition of outgoing chief minister Shafie Apdal.

Earlier, Bung was in a coy mood when speaking to the media after the meeting between the GRS parties at a hotel in Kota Kinabalu.

Bung said he and Hajiji would seek an audience with the state governor.

"Wait for the state governor to decide," Bung said briefly before rushing to the state palace.

He said he had secured an appointment to meet with Juhar at 2.30pm.

When asked how he felt about the outcome of the GRS meeting, he said, "Very happy".

Meanwhile, Hajiji, who left the GRS meeting earlier, declined to weigh in on the matter.

He said he was going to get some rest first and that he would issue a statement on the issue at a later time.

Bernama then reported that Bung had arrived at the state palace at 2.27pm, with Hajiji arriving a minute later.

However, by 3.22pm, all four leaders were seen on their way out of the Istana grounds, with Bung telling the press that the governor needed more time.