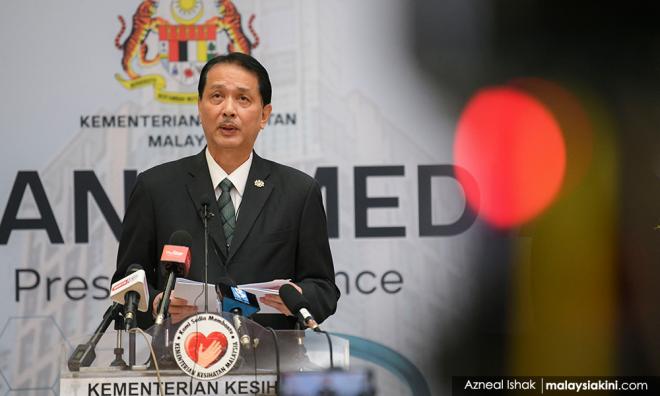 COVID-19 | Malaysia has reported 101 new cases of Covid-19 in the 24 hours up to noon today, of which 97 were locally acquired infections while four were imported.

Of the local infections, Health Ministry director-general Dr Noor Hisham Abdullah said 17 were linked to travel history in Sabah, bringing the total of such cases to 63 since Sept 20.

This included the newly discovered Bakawali cluster in Johor Bahru.

Noor Hisham told a press conference in Putrajaya today that the index cases of the cluster (Case 10911 and 10912) are husband and wife who travelled to Semporna, Sabah, from Sept 13 to Sept 18.

On Sept 24, both developed symptoms of fever, cold, and cough, and sought treatment at the Sultan Ismail Hospital, Johor Bahru.

Their Covid-19 test results came back positive on Sept 26 and both were admitted to the Enche’ Besar Hajjah Khalsom Hospital, Kluang, Johor.

Contact tracing then led health officials to identify two more cases in this cluster. To date, four have been found positive in this cluster out of 25 people tested, while eight more are still pending results.

Apart from Bakawali, three other new clusters were also reported today – two in Sabah and one in Selangor.

The index case for the Jalan Bomba cluster in Sandakan (Case 11110) had a travel history to Semporna on Sept 20. The 23-year-old developed a fever as well as cough and was found to be positive for Covid-19 on Sept 28.

After he was admitted to the Duchess of Kent Hospital in Sandakan, contact tracing found two more cases yesterday.

They did not show symptoms and were admitted to the Duchess of Kent Hospital.

Noor Hisham said close contacts for both clusters in Sandakan are still being identified for testing.

The new Benteng PK cluster in Selangor, meanwhile, involved undocumented migrants detained in Klang, where eight of them tested positive between Sept 16 and Sept 25.

Contact tracing identified a police officer yesterday as being infected with the disease.

All patients were admitted to the Sungai Buloh Hospital for treatment.

So far, 148 people have been tested in this cluster. Of the number, 139 were found negative for the coronavirus, no tests are pending results.

Of these, 51 cases were from the Bangau-Bangau cluster in Semporna, bringing the total to 276 cases.

This makes the Bangau-Bangau cluster the second largest active cluster, although it was first reported just a week ago on Sept 22.

So far, 421 people from this cluster have been tested, though it is unclear how many tests are still pending today.

Noor Hisham acknowledged that the Bangau-Bangau cluster has a high positivity rate, which indicated that the current level of testing is inadequate and there are likely to be more cases in this cluster.

The ministry will intensify its testing efforts in this cluster, he added.

Meanwhile, the Benteng LD cluster recorded only two new cases, while the Quarters cluster in Tongod and Telupid recorded another two infections.

There were 13 other cases detected in Sabah during screening for various reasons:

In Selangor, 14 new cases were reported including those in the Benteng PK cluster.

Of these, nine were detected during screening for those returning from Sabah.

The Jalan Apas cluster in Klang reported one new transmission, bringing the total to nine.

One case was detected involving a foreigner who underwent screening prior to departing to his home country.

As of imported cases, two were reported in Sarawak that originated from Myanmar, and another case from Saudi Arabia.

One was reported in Selangor that originated from Nigeria.

Of these, 13 cases are being treated in intensive care units (ICU), most of which (eight cases) were from the Bangau-Bangau cluster. Five of the ICU cases also require ventilator support.

No new fatalities were reported today, thus the death toll remains at 134 cases.