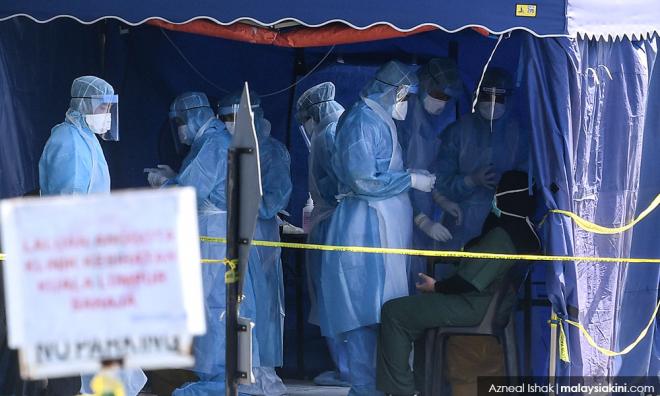 COVID-19 | Malaysia has reported 489 new cases of Covid-19 in the 24 hours up to noon today, of which 487 are locally acquired infections and two are imported.

Most of the new cases are reported in Sabah with 282 cases, followed by Kedah with 153 cases.

Cases from other clusters account for another 34 cases (7.0 percent), while 314 cases (64.2 percent) were detected in the community.

In addition, two new clusters have been identified.

The 85-year-old was found unconscious in prison on Monday morning and was confirmed dead at Penang Hospital.

The patient had a history of high blood pressure and mental illness. A Covid-19 test on the same day found him to be positive for Covid-19.

Following this, contact tracing identified six more cases, all of whom have been admitted to Penang Hospital for treatment.

There are 286 people tested in this cluster so far, of which 201 are still pending results.

Meanwhile, the Bah Puchong cluster involved the Petaling district in Selangor, and Larut, Matang, Selama and Kinta districts in Perak.

Contact tracing identified two additional cases. So far, 39 people have been tested, of whom 34 are still pending results.

Meanwhile, in Sabah, most of the cases were detected through community screening (183 cases) and patients showing symptoms of the diseases (71 cases).

Contact tracing identified 22 cases, and the Laut cluster in Kudak recorded two new cases. The remaining five cases in the state are identified through other screening activities.

In Kedah, apart from the 139 cases in the Tembok cluster, all of the remaining 14 cases are from the Bah Sintok cluster that involved a Universiti Utara Malaysia student arriving from Sabah.

In Selangor, seven of the 19 cases in the state are detected during screening for travellers arriving from Sabah including one case for the Selasih cluster in Sepang.

Four cases were detected for the Meru cluster that has spanned several states, the Benteng PK cluster in Klang and Kuala Langat recorded two new cases, while the Embun cluster in Hulu Langat and Gombak has one new case.

Screening for patients with symptoms detected three more patients in the state, contact tracing identified one case, and one case was detected during private screening.

In Penang, one case was detected during contact tracing, in addition to the six new cases for the Remand Prison Cluster.

For Johor, five cases were detected among travellers arriving from Sabah, and one case involved the Selasih cluster.

Meanwhile, one case was detected among travellers arriving from Sabah, and one case during contact tracing.

In Terengganu, two cases were detected during contact tracing, and one new case was recorded for the Bah Tanjung cluster in Kuala Nerus.

In Kuala Lumpur, three cases were detected during screening:

- One case when entering Sarawak.

- One case during pre-surgery screening.

- One case during pre-marriage screening.

- Two cases during the screening of travellers returning from Sabah.

- One case during screening at a domestic port of entry.

Putrajaya detected one case during contact tracing, and another during pre-admission screening at a hospital.

Negeri Sembilan and Kelantan each recorded one case.

There are 74 people who have recovered from the disease and have been discharged today, while the number of active cases increased to an all-time high of 3,351 cases.

The total number of cases is now 10,501 since the beginning of the pandemic, while the death toll remains unchanged at 141 cases.

However, the number of people being treated in intensive care units continue to swell from 31 cases yesterday to 40 cases today.