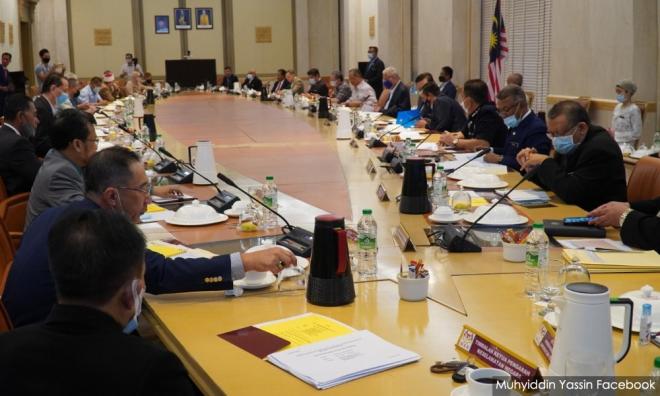 YOURSAY | Covid-positive VIPs: A case of didn't do as I said

YOURSAY | 'Many politicians knew about the danger lurking in Sabah, but they ignored it.'

The VIPs who were infected after Sabah polls

BluePanther4725: This the result of the failure by the Perikatan Nasional (PN) government to ensure adherence to the standard operating procedure (SOP) for the Sabah state election. Other countries like Singapore and South Korea were able to hold their general elections successfully, without causing any new outbreaks.

PN and its selfish, irresponsible politicians have failed the people and caused us more misery and suffering. Worse, PN ministers like Khairuddin Aman Razali and Zulkifli Mohamad Al-Bakri blatantly flouted the SOP and they are allowed to get away with it.

In other countries, such errant ministers either resigned or are fired, but under PN, these lawbreakers are allowed to remain in their posts without facing the consequences. These politicians are not fit to lead Malaysia and we must get rid of them before they ruin our country completely.

BlueKijang4184: 1) “In fairness, it was more to do with the Health Ministry's policy than the flouting of rules as it did not mandate Covid-19 test and quarantine until Sept 27. So, anyone arriving from Sabah before then was free to move about.”

Isn’t it that whatever is decided to be implemented by the Health Ministry needs to be passed by the cabinet, or at least by the National Security Council (NSC)? Aren’t those in the cabinet and the NSC politicians? So, doesn’t it finally boil down to the politicians?

Just how careless can the authorities be? These are people coming back from high-risk areas. Is one negative test enough proof that a person is not infected? Who knows, maybe even the negative result is a false negative?

When a test returns negative, should the person be retested after a certain period of time to make sure that he or she is really negative?

3) “Criticism against this policy had been raised several times, but the authorities pointed out that even though many arrived by flights from Sabah, it is not considered overseas travel and the government had never, at any point of the pandemic, imposed a 14-day quarantine rule on interstate travel.”

Time and again, the people have reminded the government that those coming back from high-risk areas should undergo compulsory and mandatory quarantine in government-designated facilities - but this reminder from the public has all but fallen on deaf ears.

Didn’t the public see it better than the government/politicians? By right, these Sabah returnees who unnecessarily travelled to Sabah, be it BN, Pakatan Harapan, PN politicians or even casual travellers, should be charged for the swab tests and the quarantine upon arrival.

4) “Some politicians did the bare minimum as required by regulations, while others took extra precaution to self-isolate for longer.”

What do you mean by bare minimum when many were spotted in crowded places, shaking hands, giving out gifts, having meals together, etc? Seeing Sabah’s success, are Sarawak’s politicians also thinking of a state election in the near future?

We were almost out of this Covid-19 problem, only to have it spiking again just because those up there bashfully claim that they have understood the disease, are prepared to face a spike and are confident that we will have no problem overcoming it, should it spike again.

Didn’t we almost successfully overcome it the first time? Mind you, the virus has unseen, multi-prong ways of infecting us. Nature always has its way. Otherwise, it would have been near to eradication by now.

The first near successful attempt by us to counter the disease does not guarantee that we will be successful the next time around.

Avicenna: Let's not be so one-sided and talk about the MPs bringing Covid-19 back to Peninsular Malaysia from Sabah.

The state election was triggered by the collapse of the Warisan-led government as a result of politicians jumping ships. These politicians were rumoured to have been paid to do so. This plot has its origin from Peninsular Malaysia and seemingly, with the blessing of the prime minister.

Former Sabah chief minister Musa Aman was basically let loose on the state to carry out this dastardly deed. By triggering the state election, these culprits have directly helped spread the infection by encouraging the uncontrolled movement of the people during campaigning and voting.

Was it because of the plot to overthrow the Warisan state government?

Even the photos show that the politicians did not wear a mask or did not wear it properly. No wonder, they got infected, and worse, infected others. The proofs are in the photos, but the authorities did not take action and they closed one eye to the Covid-19 SOP. That's why the rakyat are so angry.

IndigoCat9464: Yes, even before the Sabah election campaign started, the cases were already on the rise.

There are no two ways to look at this. What's happening with today's new wave of infection is the sole responsibility of the government.

PeakyBlinder: Now who says the ‘Kluster Menteri’ is not true at all? Just look at all these large numbers of assemblypersons who initially tested negative but were later revealed that they were actually positive upon a second test.

Who knows how many others are actually asymptomatic and are negative on their first test?

Visit to the home of a quarantined person by relatives sparks new clusters
7 Oct 2020
Azmin, Saifuddin Abdullah announce they tested negative for Covid
7 Oct 2020
Mercy Malaysia to set up nine Covid-19 screening stations
7 Oct 2020
COMMENT | The big lie that rank and status do not matter in this pandemic
7 Oct 2020