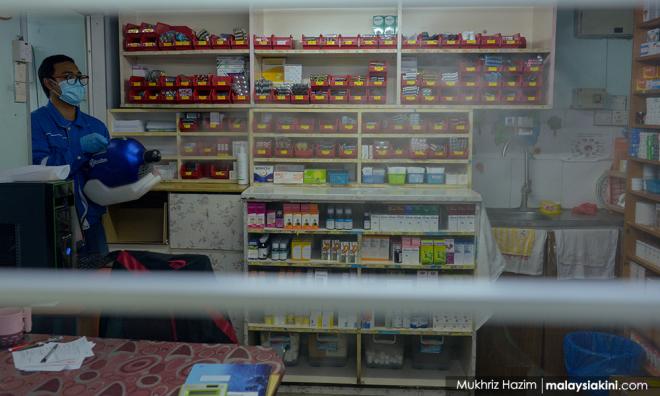 Below are verified locations which are reported to be affected today.

However, the list does not include locations which have been closed temporarily pending results of swab tests on persons under investigation.

These locations have also been duly sanitised.

If you know any locations which were announced today, but is not listed here, please send an email to [email protected].

Several voters in the Beaufort constituency, who cast their ballot here during the Sabah election on Sept 26, have tested positive.

The Beaufort Health Office is urging those who in voting streams three and four, who cast their ballots from 3pm to 5pm, to send a text message to 019 6056704 with their full name, IC number, contact number and the time they cast their ballots.

He said sanitisation works were carried out at the school last night and urged other classmates of the patient to do voluntary swab tests.

The management of SK Bangsar was notified by the guardians of two students that the latter have been tested positive with Covid-19.

When contacted this afternoon, a senior member of the management said they, however, are still waiting for confirmation from the Health Ministry.

The order was issued after a student was tested positive.

Bernama quotes Terengganu State Health Department director Dr Nor Azimi Yunus as saying that a student at the school has tested positive and the school will be closed for eight days until Oct 15.

A case was reported involving a person who took a bus (myBAS, registration number NDH 2259) from KLIA2 Platform B10 to Nilai Sentral, departing at 9pm and arriving at 10pm on Sept 30.

Other passengers are urged to contact the Seremban Health Office at 06-763 4809.

The branch closed for disinfection until tomorrow because an "external person" who tested positive for Covid-19 may have visited the branch, a notice at the branch premises reads.

An employee at Parkson One Utama was tested positive Covid-19, according to a report by Sinchew Daily.

It said that the outlet would be closed starting today until further notice.

A member of the Fitness First gym at this mall has tested positive, the mall said. All affected staff have undergone tests and will observe self-quarantine.

Their report was based on a notice put up by the bank.

An employee of Pestech International Bhd at Oasis Corporate Park has been tested positive for Covid-19 today, according to The New Straits Times.

The report quoted Oasis' management as saying that the employee last checked into Pestech's office at the Meritus Block on Oct 5. All colleagues of the positive patient have been placed under quarantine.

The branch closed for today for disinfection because an "external person" who tested positive for Covid-19 may have visited the branch, a notice at the branch premises reads.

De facto religious affairs Minister Zulkifli Ahmad (below), who tested positive on Oct 5, attended a private function at the restaurant on Oct 1.

The restaurant confirmed this with Malaysiakini when contacted on Oct 8, and assured that disinfection has been done.

Bernama reported that the MNRB Holdings Berhad headquarters has been closed from 3pm today until Oct 12 for disinfection after an employee tested positive for Covid-19.

Bernama quotes Terengganu State Health Department director Dr Nor Azimi Yunus as saying the mosque has been ordered to close for three days until Saturday after being visited by a Covid-19 patient on Oct 2.

A resident of Block A Core 3 has tested positive for Covid-19 on Oct 5, after returning from Sabah, the building management told residents in a notice sighted by Malaysiakini.

Residents at Taman Seri Keramat were notified of a Covid-19 positive case involving a resident at Jalan AU2A. The patient was tested for Covid-19 on Oct 5 and confirmed positive on Oct 6.

A resident of Block F has tested positive on Oct 5, the management said in a notice to residents sighted by Malaysiakini.

Desa Impiana Condo management has issued a notice yesterday to notify that two residents at Block H have been tested positive with Covid-19.

According to the notice and condo operations manager Wan Mohd Asyraf, the two residents are a couple who have recently returned from a high-risk area and they have been taken to the hospital by health authorities on Oct 4.

A female resident at Block 1 of Puteri Palma Condominium at the IOI Resort, Seri Kembangan was tested positive with Covid-19 two days ago, according to the premises' security office.

Contacted today, a representative told Malaysiakini that the condominium management office would be closed temporarily starting today, pending test results for all staff.

The man in his 20s was said to have been absent from work due to a fever for a week prior to him being tested positive. According to the sources, among the places that the staff visited before he fell ill was a hotel in Kuala Lumpur.