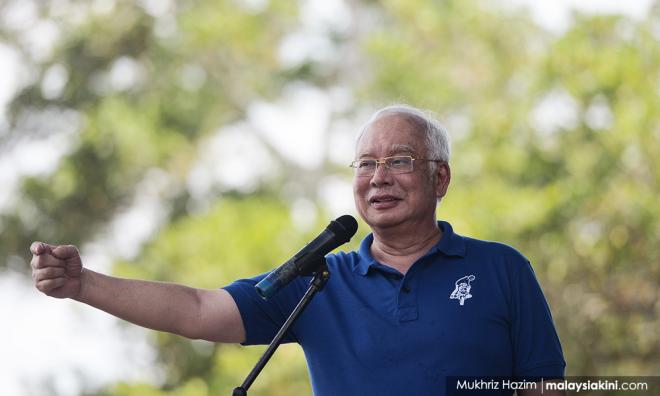 YOURSAY | 'Be careful what you wish for, Najib.'

Bobby0: By right, both former prime minister Najib Abdul Razak and Plantation Industries and Commodities Minister Khairuddin Aman Razali should be disqualified from holding their posts as they have broken the law. Only in this nation that politicians are free to carry on as normal.

With Prime Minister Muhyiddin Yassin leasing an illegitimate administration, it will further endanger his position. This is nothing to do with upholding the law, but it’s about being power crazy.

No wonder, this nation is not moving forward but seriously sliding down into a pit hole.

As for as the opposition paying cybertroopers to defend them, Najib, it does not always boil down to money. It has to do with the love for this nation.

So Najib, stop pointing fingers at others. Stop politicking for once and put the nation and its people above your selfish agenda.

William Tell: Yes, there is also widespread dissatisfaction over Najib, who is still walking free after being found guilty and convicted.

Given that Najib has demanded that Khairuddin be charged, he should remember that he also has been charged and found guilty and as such, his rightful place should be in prison.

Vijay47: Najib’s urging for Khairuddin’s prosecution to dispel “widespread dissatisfaction” surely is a poetic expression at its most innocent.

But prithee I pray, be careful what you wish for, Najib, like the other poet Billy of Stratford-Upon-Avon did say: “Thyself shall see the act; For, as thou urgest justice, be assured Thou shalt have justice, more than thou desir'st.” Which, as they say in kampung, means “watch it, bro, you’ve got yours coming”.

Yet, as you do hasten to speak caringly of Khairuddin, be alert of DAP veteran Lim Kit Siang, who shall not rest till he brings all of Umno’s house and knaves to their knees and thence to write sorrow on the bosom of the earth.

And like Portia, the Merchant of Venice, your loving heart cannot be stilled, you proceed to beseech that banks extend the loan moratorium.

Ahh, the little joys and comforts of riches from honest striving, in truth your guiding light since, again in the words of the Bard: “For I can raise no money by foul means.”

The Way Home: Clearly the antics displayed by the hypocritical and much-emboldened ‘bossku’ is akin to that of a ‘poacher turned game warden’ by all accounts.

As always, the DAP, and particularly its formidable steward Lim, have been made to stand in the crosshair of his firing line or being cast as the ‘whipping-boy’ in Najib’s dire attempts to discredit and unfairly discriminate the progressive popularity of the party.

It would serve Najib well to make peace with himself and his maker via immersing and spending more proactive time in deep contemplation and honest reflection on the wrongs he has done to maintain his sense of dignity and sanity in preparation for his impending protracted incarceration.

PeakyBlinder: To be honest, this is the one time that I respect what Najib has to say. It is somewhat true that the issue with Khairuddin has been wisely politicised by the opposition, but still, that doesn't detract from the fact that there is an element of double standards going on.

Beman: “I understand that the Health Ministry and the Immigration (department) did not issue a mandatory quarantine order for him,” said Najib.

Even if it is true that Khairuddin was not issued a mandatory quarantine order, it is still an issue. Why was there a double standard? As long as there is a double standard, any Malaysian, not only Lim Kit Siang, has the right to harp and nag on the issue until it is properly addressed.

ScarletPanda9731: If you ask people at random about the standard operating procedure (SOP), more likely than not, they may tell you that they are tired of:

2. No action against ministers who flouted the SOP;

3. Ordinary citizens being fined for breaking the SOP;

4. Certain leaders making remarks about other leaders when they themselves are at fault; and

5. The pot calling the kettle black.

What is happening now? Can you blame the ordinary people who blame the leaders who are bad examples of truthfulness?

Failure to act against certain people shows leadership weakness or fear of losing support. When self-preservation is more important than integrity, then such leaders have lost their moral compass.

Adam Ningau: And Khairuddin is talking about Harapan cybertroopers? Believe me, Muafakat Nasional has more. You won’t be able to imagine the amount of slanderous statements and racist comments in the Muafakat Facebook group.

Day and night, they target DAP and demonise the non-Malays. If they are not paid, then they must be too free.

Malaysia4All: Harapan cybertroopers, my foot. Harapan does not (and cannot) resort to using cybertroopers, unlike a party like BN that is wealthy beyond belief.

The rakyat are disgusted with Khairuddin's offence and his escaping charges when someone else doing the same thing would have been charged. The people who are posting things are not cybertroopers - they are the rakyat, my friend.

Appum: Najib oh Najib, you could have made a real good statement and carry greater effect if you had been straight to the point of getting the officials to charge Khairuddin for breaking the law.

But as you have more Umno blood in you than anything else, you must bring up and blame Lim and the DAP on this matter. See, you could have saved a few redeeming points but instead, you have cheapened the context of your message.

By the way, I am unemployed now, anyone can give me a lead to become or apply to be a cybertrooper?