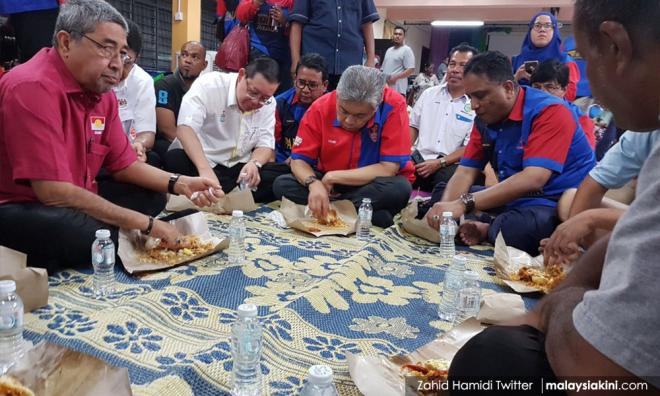 YOURSAY | Unthinkable, but can DAP and Umno work together?

YOURSAY | ‘Let’s be honest. In this country, the Malays need the non-Malays and vice versa.'

COMMENT | There's no moral dilemma of Umno and DAP working together

MS: The country's political divide, now being weirdly bridged by strange bedfellows, is to some extent, the result of simplistic, “Black vs White, Good vs Bad, Malay vs non-Malay” mindset of the general population - a population which has been deliberately blinded to the 50 shades of grey between the polarities.

The coming together of apparently disparate elements can only be good for the country as it matures politically. For one thing, it will disabuse Malaysians of their long-held notion of “good guys versus bad guys”.

More importantly, it will force a rethink and hopefully a reset of policies that have pushed the country into the hole which it is in today.

ScarletGopher9210: I think DAP working with Umno is a good thing but it must be without the corrupt/tainted Umno politicians.

First and foremost, both these parties form the bulk of parliamentary seats/support in Malaysia and if they can somehow compromise and mutually agree for a progressive, united, and stable government, it will be good for the country.

After all, collectively, both these parties alone have about 80 seats.

Sulaiman Che Long: Umno is no longer united but a cluster of weakened strains of the virulent Umno Baru. It is important to use Umno’s name, so that there is time for their cooperation with DAP to sink into the general Malay population’s minds.

Further down the road, not in my lifetime perhaps, Umno founder Onn Jaafar’s proposal to open up Umno, may take place in the form of a merger of Umno and DAP. Unthinkable, yes. But who would have thought DAP could work with former prime minister Dr Mahathir Mohamad?

DAP is rock solid, dependable, and reliable. They get the big picture and they are mission-minded. They could work with Mahathir for the good of the nation.

Meanwhile, the law will take its due course. Those found guilty will have to go jail. Whether Umno can rejuvenate, resurrect, or morph, I don’t know.

PKR, though young, has already made an impact. With Anwar Ibrahim as prime minister, we may see a change as Umno grassroots members are assimilated into PKR. That is another possibility. And that possibility is real as members are pragmatic.

Anonymous 5035: Indeed, such a cooperation is not totally unimaginable. I doubt if the Chinese will call DAP a traitor for working with Anwar and Umno.

Those who are jumping up and down, sneering and name-calling, are probably those from the traitor’s camp and the Mahathir gang who think they have DAP in their pockets and cannot stomach the idea of losing to Anwar through DAP.

MalaysiaTakBoleh: It is important and crucial to be pragmatic, and I am starting to see why this might be a workable solution moving forward.

Like it or not, Umno has a nearly full grip of the Malay grassroots, and so does DAP with the Chinese. Imagine what both could achieve if they set aside their egos and work together

The Wakandan: Politicking and propagandising aside, neutral observers would find it hard to understand why the two major parties today (Umno and DAP) cannot work together.

Perhaps, here is the thing. Firstly, DAP basically rejected the kleptocrats. We cannot deny that Umno, after 60 years of governing, have obviously made that their favourite pastime. Now, what about minus the kleptocrats, would that lessen the DAP’s dilemma for working with Umno?

The answer to that is obvious. DAP was prepared to work with Mahathir, the father of them all. Who is a bigger klepto than the old man?

Secondly, DAP never denied the special position of the Malays in the country. Umno, PAS, and Bersatu insist DAP is anti-Malay and anti-Islam. And if Umno can claim they represent the Malays - which for the bigger part they do despite the same claim by Bersatu and PAS - DAP cannot ignore that fact.

Thirdly, can they get past the rhetoric against each other, built up after years upon years due to political expediency? That would be the question. In the past, Umno couldn’t or did not want to. They did not need DAP, they had MCA. Now Umno’s situation is different.

DAP also cannot abdicate their responsibility to their voters who have supported them – and that means they have to produce results to be more involved in running the country. Collaboration would be the most pragmatic thing to do.

Proarte: Well, DAP was behaving like MCA in Pakatan Harapan, willingly emasculated and genuflecting to the will of Mahathir. They betrayed the 2018 election manifesto and never challenged Mahathir and his ‘Ketuanan Melayu’ modus operandi.

They were very happy with their ministerial positions and the perks which came with office. They very quickly became arrogant and distanced themselves from the rakyat, the very people who put them there in the first place.

So, it is not surprising DAP may collaborate with Umno because how different is this with their association with Mahathir? In this scenario, they will be emasculated even further, but Umno will increase their perks and buy their undivided loyalty.

Sadly, DAP will place democratic values, good governance, the rule of law, justice and equality in the back burner in the interest of what they will tell us is “the big picture” and “realpolitik”.

PW Cheng: Let’s be honest. In this country, the Malays need the non-Malays and vice versa. There’s no secret about it.

If Umno and DAP can come to a middle-ground, I think that can set the momentum for the country to move forward. The rakyat on the ground can adapt as well.

It’s only the politicians who want to divide us. I would rather see them fighting behind closed doors rather than openly, which would frighten away investors. There must come a time when sanity rules.

If only we can discover something like the time of Tunku Abdul Rahman, we will be on the right track. Let’s live in harmony to build a better Malaysia.

BlueKijang4184: There are good guys and bad guys in every political party. DAP, generally more principled, is no exception. DAP also has its share of bad guys. Umno is not 100 percent bad either. People can also change for the better.

DAP, which had been too pro-Chinese in the past, has learned to be more accommodating and tolerant towards the Malays. Umno with its share of tainted politicians also has a share of good ones. The same goes with PAS and all other political parties.

How nice if all the good in all the parties can come together and steer us forward. Being a non-Malay, I don’t mind if the government is majority Malay, so long as it is a clean, capable, and efficient government.

It is time to be matured, to see beyond race and religion for the good of Malaysia. After all, we are all of one race, the human race. Why should we fight each other because we are of different races and religions?

I have worked most of my life in situations where the Malays were the majority and they treated me very well. They even forget that I am a non-Malay. I am very thankful to my Malay friends.

Whether we are Malays, Chinese, Indians, we must first look at ourselves in the mirror and learn to respect others before we can expect to be treated well. It is time to have peace in the country.

YOURSAY | Game of thrones, Round 2