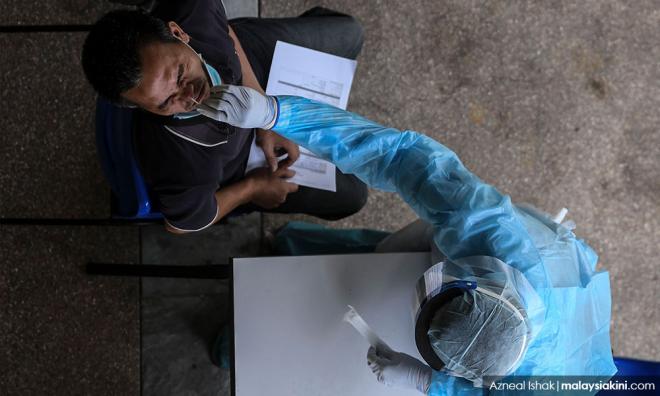 COMMENT | New reports on the Sabah Covid-19 health crisis have increased this week. Repeatedly, organisations have called for greater resources and new approaches to stave off the strain on medical facilities, continued high numbers of Covid-19 cases and worrying trends of higher severity in infections, mortality and socio-economic impact. Often overshadowed by reports of cases in malls in Selangor or prisons in Penang, there still is a lack of full appreciation over the severity of Sabah's Covid-19 situation.

In hospitals, 72% of the intensive care unit (ICU) spaces have been occupied. Despite the creation of "quarantine "centres and an increase in the number of beds in the too few hospitals, 75% are occupied with Covid-19 patients.

The share is considerably higher in locations with higher infections, notably Tawau and Semporna. Thirty-eight people have died in Sabah in the last ten days. Today, Oct 18, an additional 702 cases were reported for a total of 7429 cases to date in Sabah. With 36% of all Covid-19 cases in Malaysia (despite only 12% of the population), Sabah is not only the epicentre of Malaysia's third wave, it is a testimony to the serious shortcomings in the short-term response and long-standing neglect of both state and federal governments.

It is important to recognise that important steps have been taken in the past week, but also to highlight areas where responses can be improved moving forward. Sabah's situation remains dire, and much more can be done.

Let's start with some positives.

Problem recognition: On Friday, after a week of officials implied that the situation was under control and would be over shortly, Malaysia's Health Ministry (MOH) director-general Dr Noor Hisham Abdullah acknowledged that there is a "crisis" in Sabah.

The recognition of the seriousness of the situation in Sabah should be credited to the consistent bravery reports by doctors and other health professionals about the situation on the ground, and to repeated statements by health professionals about the virus's trajectory. Science and honesty have pushed officials to accept the serious realities on the ground – sadly reinforced by a steady stream of deaths.

Civil society mobilisation: At the same time, there has also been broad mobilisation for Sabah. Calls for resources to help buy equipment, volunteer groups and information sharing has ratcheted up. Local communities – from church groups to local surau neighbours – have started making and donating PPE.

Food aid has also been distributed as Sabah's lockdown is also life-threatening in another way. Given Sabah's high level of poverty, this aid has been literally lifesaving. No one should die from hunger in modern Malaysia. Civil society has once again worked to fill in the gaps where the government has not delivered, to offer support – both material and inspirational.

Increased medical resources: The government has created quarantine centres for more patients. Slowly, there has also been more allocation of resources, personnel and testing, including modest adoption of the rapid antigen (RTK) tests highlighted last week.

In the nine clusters in Sabah, a total of 24,417 people have been reportedly tested since the clusters emerged. This has meant that more Sabahans have been tested, and steps are being taken to get a better sense of how widespread the virus is. This modest improvement in the mapping of the virus comes after clear recognition of the infectious strain D614G, originating from either Indonesia or the Philippines.

Improved contact tracing: Also, with hard work behind the scenes by officials, there has been even more improvement in contact tracing. The number of unlinked cases has dropped significantly to around one third. This is still too high but a stark difference from last week.

The dedication of those making calls from local medical authorities (and in some cases in Sabah making house calls in rural areas), working to connect relationships and reduce risk, is an integral part of Malaysia's broad response. Kudos to the health officials in the district offices, often unrecognised, who have been working bruising hours, alongside their colleagues in medical facilities and other front-liners whose ordinary bravery is beyond extraordinary.

These positive steps, however, do not go far enough. In fact, they fall far short of what is needed and what Sabahans deserve. It is important to keep in mind that Sabah's oil and gas revenue has provided billions to national coffers. They have rightly called for their fair share, and at this crisis especially, more resources should be allocated.

Inadequate support from West Malaysia/ federal government: MOH statements report that 767 staff have been sent to Sabah this week. One has to read the fine print. The overwhelming majority of these, 497, are from within Sabah, sent to the districts most affected, notably Semporna, Tawau and Lahad Datu.

A paltry 175 medical personnel have been sent from outside of Sabah. This is nowhere near what is needed in a crisis. Sabahans already feel that the federal government's inadequate management of immigration, neglect of health facilities and inadequate return of funds to the state have failed Sabah. To send less than 200 additional staff in a crisis reinforces and, in many ways, justifies this anger.

Generally, there has been an unwillingness on the part of the federal government to spend. Focus has been on building physical infrastructure – new quarantine centres – rather than intangible infrastructure such as harnessing personnel, working to improve flaws in the MySejahtera software that does not even work in the half of Sabah without internet, and most importantly, engaging in more testing.

The stinginess of the federal government at a time of crisis is disappointing and ultimately self-defeating as the situation worsens. Testing has only increased by a third while cases have sharply increased.

Implementation backlogs: Part of the problem with expanded testing appears to be problems in processes. To date, it seems that only approximately 40% of the tests available have been used.

Recently, it was announced that RTK test kits would be used in Sabah to augment the PCR tests, but the number of 100,000 tests per month is low for a population of 3.7 million. These tests have not yet reached the ground. So far, the RTK tests only comprise 15% of testing in the country, too low for mapping the virus.

It is not clear how many have been used in Sabah, despite the call for more rapid testing. There is also a serious backlog in testing results conducted to date. Test results are only coming back on average five to seven days later, sometimes ten days – well after some patients are showing serious signs of symptoms and complicating contact tracing efforts.

There are reports that test kits are being flown back to Peninsular Malaysia to help remove this backlog; this adds to the delays. It is not clear how many samples are backlogged and what has been done to improve the speed of the results. The system is understandably overwhelmed, but the steps taken to pick up the slack from other areas have not been properly taken.

Continued resistance to policy shifts: MOH has claimed that it is adopting "new approaches". In fact, the changes in policy orientation have been minimal. The only major shift has been a necessary move toward the use of quarantine centres as opposed to hospitalisation for Covid-19 patients with minor symptoms.

Sabah requires further meaningful shifts away from the "urban-medical facilities are available" model that has been used to date, due to the state's pre-existing low-resource environment and worrying trends in terms of infections. There needs to be a multi-faceted and holistic range of solutions that includes more significant testing as well as greater considerations about the local and rural conditions.

The local trends in terms of infection rates are especially worrying. Data this week has shown that Covid-19 infected Sabahans have a much higher rate in need of hospitalisation reported to reach 43% of those infected. While more research needs to be done, questions are being asked about the ties of higher infection rates to the higher malnutrition and poverty in the state (similar to disproportionate effects of the disease on other poorer or marginalised communities globally).

Below, are the rates of positivity in clusters, which highlight an example of the serious concentration. Many of these areas have high concentrations of poverty. Greater availability of beds given hospitalisation needs also needs to recognise the underlying factors that could be contributing to higher infection rates.

There is a need to get ahead of the virus, rather than react as the virus evolves. Although reports of greater tests being made available suggest a possible reevaluation in thinking, so far, the government has resisted widespread testing throughout the state, with much of the testing concentrated only in red zones.

This continuing resistance to policy reforms and recognising the unique circumstances and complexities of Sabah is costing lives. Keep in mind that the disease is now spreading through the community in the state, through still too many unlinked cases, and the numbers infected are not dropping.

Limited inclusive outreach: The "whole of government, whole of society" approach has not been implemented inclusively. Suggestions from the public need to be understood as part of an effort to improve the situation.

Efforts to improve coordination with government authorities beyond MOH and with local authorities can strengthen responses on the ground. Territoriality mindsets have no place in crisis such as this. There has been inadequate outreach to the public within Sabah. People want to help, even those in other government departments, and desperately so. More can be done to harness this goodwill and cooperation.

Abdication of local state leadership: The Gabungan Rakyat Sabah (GRS) state government has also not stepped up during this time. With its Chief Minister Hajiji Noor (photo, below) in hospital this past week (fortunately discharged virus-free from the hospital this morning along with his wife), the state response has not had clear leadership or direction.

While a spokesperson has been appointed in the widely-respected veteran and State Minister for Local Government and Housing Masidi Manjun, Sabah state lacks a task force and health minister. The Sabah state government needs to share its local knowledge and better harness its own resources to strengthen the response to the crisis. The Constitution of Malaysia specifies that health is both the responsibility of state and federal governments and therefore must be taken seriously by the Sabah state government.

Greater financial relief: Finally, it is important to appreciate that with a lockdown on movement in Sabah, the hardships extend beyond the immediate health issues, and in fact, reinforce them.

Sabahans who cannot afford to go to the hospital will stay home and possibly infect others. If they cannot eat properly, their immune system will weaken, as evident in the trends of higher severity in infection in poorer communities.

Poverty in Sabah is already a grave concern. A lockdown worsens this, especially hitting the poorest harder. A special welfare and economic relief package for Sabahans is needed in this period, to assure that food is on the table and livelihoods protected, especially given likelihood that the lockdown will be in place for some time given the severity of the infection rates.

Many are working full-on, exhausted as the Covid-19 crisis in Sabah continues. The everyday heroism and kindness in Sabah have been overwhelming, but it is also being accompanied by anxiety and fear. In the last week, the state has received greater attention to its serious crisis, but it deserves more, much more to reduce risks and get Covid-19 under control in Sabah.

Bridget would like to thank the many medical practitioners and Sabahans who assisted with this piece.