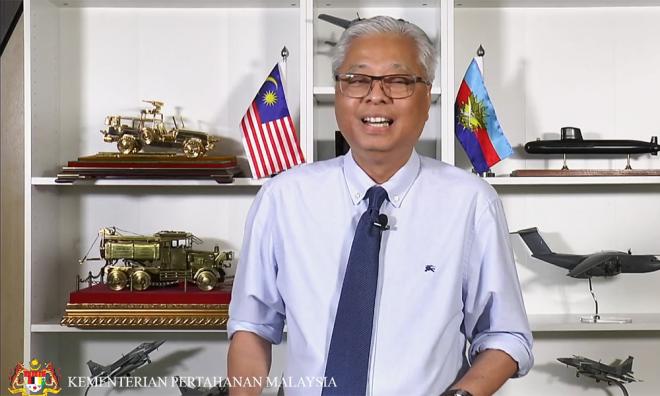 YOURSAY | Govt runs around in circles over CMCO SOPs

YOURSAY | ‘All the good work is undone. This is very poor coordination indeed.’

Only industries, civil service affected by work-from-home order, others not involved: Ismail

Ismail Sabri chuckles over confusion on 'work from home' SOPs

Tencent: We have the most cabinet ministers in the region and yet for such a simple directive, it got everyone confused. Then conveniently after all the hoo-ha, there is a revision in policy.

We have a bunch of clowns running the country and they are only fit to be in the circus.

Newday: Senior Minister (Defence Cluster) Ismail Sabri Yaakob, what are you not telling us as to Covid-19 outbreaks in the public service?

If there is an official directive for public servants to stay at home, why not enforced everywhere? Covid outbreaks do not discriminate between the public service and "informal" sectors.

How much Covid did these unscrupulous politicians and their entourages drag back from Sabah? It appears on the face of it that the public service has become greatly compromised.

By the way, who came up with the word "informal"? It makes any other business not of the government to be some sort of a hobby!

Skippy: Good grief! What utter rubbish. There is zero clarity. Are the guys manning the roadblocks going to be able to tell the difference between ‘industry’ and ‘non-industry’, whatever that means?

IndigoKite6964: I was so confused I turn to Wikipedia for help. This is the definition of Miti.

Here you go - if you are a small- and medium-sized enterprise, you are under Miti. Big corporations not included. The banks are not involved as well as otherwise, the economy comes to a halt.

The part about productivity is making me laugh as I write this message.

Still, it is so vague that you might as well go to work until they tell you to go home. This is to show you all how powerful Miti Minister Azmin Ali has become and he is flexing his muscles just to show us how big they are. So, unless you are intimate with him, don't play-play.

Monologue: All the good work is undone. This is very poor coordination indeed. The crisis team is in crisis.

Frank: Just what is going on with Ismail Sabri? Has he lost his marbles after having to face the camera day in day out for months on end?

Of course, the rakyat was questioning these new measures - for it is not like these are to be implemented weeks from now (instead of within hours).

Malaysia, Malaysia, what have they done to you?

Surely the world watching all this and more that have taken place in the last few months are saying to themselves - like they did not too long ago when Malaysia was made quite infamous with its worst case of kleptocracy since the beginning of human civilization - just what is happening to the most promising country in the world?

Pelican: Ismail Sabri and the other useless bungling idiots are causing so much unnecessary anxieties and pain to the struggling hardworking Malaysians holding up this nation and providing them with their lavish parasitic lifestyle and he still has the gall to chuckle and mock us instead of apologising for all the trauma they caused.

Someone ought to compile a list of their follies so that it won’t be forgotten and we can roll it out at every election or by-election to remind all of what they had done.

Anonymous 540: The rakyat are already facing a lot of anxieties due to plummeting household incomes. Some have led to domestic disharmony due to insufficient money to sustain the whole family.

Please do create more anxiety by not-well-thought-out and extremely confusing directives. Don't make life difficult as it is already in now. Most businesses trying very hard every month after the first movement control order (MCO) to cover rental and other incurring cost only.

Mohd Bakri 3: We are glad the ministry gets a laugh out of this because they deserve the amusement.

The rakyat has already been entertained by this and the previous government for years and wondering what other jokes/odd statement/action can come out of our ministers' mouths.

Two Come Out: I suppose a chuckle for sheer incompetence is the only response we expect from Sabri Ismail.

After almost seven months, there is still no standard operating procedure (SOP) for the different MCOs. Every time, there is a new set of rules, which get changed daily.

Eyes Wide Open: You can laugh, but the way your task force disseminates information, it caused companies tens of thousands ringgit each to rush for Covid tests for their staff.

You only gave companies a day to do their tests. And now you say it’s only for select industries and only for foreign workers? You think this is funny?

You think it’s funny to keep on fining the rakyat who are already suffering for breaching the SOPs when your ministers can get away with it?

Please, spare us your cheap jokes.

Beman: The confusion is created in the first place by a bumbling minister who keeps on changing his mind and who is incapable of giving clear instructions.

This is not a laughing matter. For the ordinary folks like us who can be fined or even jailed in an instant for breaking MCO regulations, we don't find this funny.

Rifraf: How dare you make fun of this man who has toiled endlessly to entertain us. Yes, when it comes to information, he is more RTM with cliff-hangers rather than Netflix where you can binge all episodes, but undoubtedly, he tries.

I secretly think the cliff-hangers is because he wants us to tune in to the next episode (and he's succeeding!).

But I am still trying to figure out what he's trying to say though. Definitely, without any doubt whatsoever, he's trying to tell us something. I know that unquestioningly because his lips move.

MW: This stupid practice of announcing something one or two days in advance of detailed SOP release simply has to stop in order to avoid confusion and wastage of time and panic buying, at a time when morale is at an all-time low and many are suffering.

And yet, you saw it fit to chuckle and laugh off at your own incompetence.

GajahDuduk: I'd like to propose a new SOP for ministers speaking to the press.

They should tie one arm and one leg behind their back and hop in circles while speaking. Also, a ‘cicak’ (lizard) should be put in the back of their shirt.

But in all seriousness, the rules are very unclear and always-changing and the fines for non-compliance are huge. You cannot plan or comply, even if you wanted to.