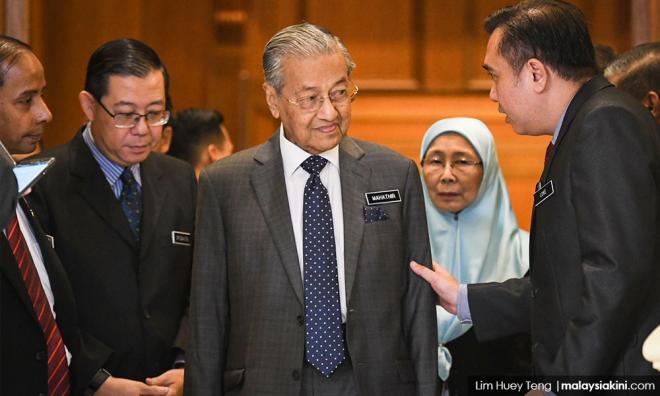 YOURSAY | Harapan-Mahathir formula tried and failed, time to move on

YOURSAY | 'Older leaders can't give up their power, but the future is in the next generation…'

COMMENT | Ramkarpal's excoriation of Mahathir is an indictment of Harapan

IndigoTrout2522: Malaysiakini columnist S Thayaparan is right. Within the first year of the Pakatan Harapan government, the rakyat already made comment after comment to warn that then prime minister Dr Mahathir Mohamad could not be trusted.

Mahathir was not supporting the Harapan manifesto. He was not going to honour his promise to the transition plan as agreed because he had a different agenda. He strengthened Bersatu by bringing in Umno MPs. He deliberately undermined Anwar Ibrahim by dividing PKR, using then party rival Azmin Ali. He continued to undermine DAP with the apparent support of Lim Guan Eng and Lim Kit Siang.

His words and actions were apparent enough. However, Kit Siang and Guan Eng were out of touch with the rakyat. Maybe getting power and positions blinded them, even after losing so many by-elections.

All we heard was that they would evaluate why they lost, but, to the public, it was obvious that the trust and confidence were eroding. They did not support Anwar the way they did Mahathir, and it still seems that way now.

Mahathir used Anwar to undermine the whole coalition when the fact was that Mahathir should be the one to shoulder the blame. Of course, Anwar could not imagine, in his wildest dreams, that his friends were the ones to betray him.

DAP has many young dedicated leaders. It is time for Kit Siang and Guan Eng to take a step back and let the younger leaders helm the party and, hopefully, the government. The same goes for PKR. Our younger leaders are the future of Malaysia.

Meanwhile, those younger leaders should speak up. Of course, those older and established leaders would try to sidetrack them because they can’t give up power, but the future is in the hands of the next generation.

Hopefully, many of them will speak up.

MS: In 2018, a desperate population drowning in a sea of malfeasance and bigotry clutched at a familiar straw, despite the familiar pain it triggered - Mahathir. So desperate was it that everything known about him, detested, and rejected, was quickly pushed aside… to embrace his second coming as a saviour.

The wily coot, knowing the people’s desperation, made his play using Anwar as bait, and a naive, eager Harapan tantalised and blinded by the prospect of winning.

So, almost everyone was fooled. Many still are. The question now is, has anyone learned anything from that disastrous exercise in mass foolishness? I say no.

The average Malaysian's love of deification (demonstrated just a few months ago and expressed as a mural and endless vials of praise), his tendency to stand erect and in awe at the sight of the ornately titled and wealthy, and the disgusting habit of thoughtlessly forwarding urban folklore about "heroes" to all and sundry, mean this foolishness will be repeated.

Like the virus running amok, there is no cure for stupidity.

Undecided: Remember folks, the whole point is not that Mahathir is some sort of a great traitor, but rather, Harapan political operatives enabled his behaviour, which led to the coalition’s downfall.

The top leaders of Harapan at the time believed this was the right strategy, i.e. to strengthen their Malay voter base and keeping Bersatu/Harapan in power, so as to give more time for reforms to be carried out.

One term is not enough - that was the belief. It is not because they just wanted to please Mahathir or were afraid of him. And it is easy to criticise them in hindsight.

Mahathir just went too far with his toxic rhetoric at the Malay Dignity Congress last October and this angered DAP supporters, especially so soon after the khat issue. Supporting him as prime minister for a third time after so many crucial missteps by him would be disastrous for Harapan.

The real reason for the present political predicament is that there are too many self-serving Malay-Muslim leaders who have placed their own interest above the country's.

OrangePanther1466: Many have been brainwashed by all the bad press on Mahathir. I have repeatedly asked that readers think for themselves before coming to a conclusion. I think DAP leaders Kit Siang and Guan Eng understand the issues well.

Plain and simple, 65 percent (some say 70 percent) of our population is Malay bumiputera. The New Economic Policy (NEP) was introduced 50 years ago. To me, it was brutal to the non-Malays but perhaps necessary for long-term stability. The result to-date is debatable but can be counted a success.

However, the implementation was characterised by massive corruption and disproportionate advantage to the elite class. The politicians, especially the Malay-based ones like Umno and PAS, took advantage of the NEP and the special position of the Malays to retain a chokehold on the country.

Now, there are calls to roll back the NEP. Fair enough, but you cannot give this "shock" treatment to 65 percent of the population. To take back what two generations of Malays have taken for granted as their entitlement is very difficult and almost impossible if you take the words of the Constitution into consideration.

It’s like Anwar coveting the premiership for 20 years and feels he is entitled to it. You take it away from him. You will have pushback.

In this context, the Harapan manifesto and reform agenda will hit a stone wall, with the 65 percent blocking it. The simplest and most innocuous of measures, like ratifying the International Convention on the Elimination of All Forms of Racial Discrimination (Icerd) and the Rome Statute of the International Criminal Court (ICC), drew massive protests.

Yes, these are good values we ought to embrace, but how do we do it without disenfranchising a large section of the population?

People have excoriated Mahathir for attending the Malay Dignity Congress and the speech he made. Just think: if all the senior Malay leaders were attending, can Mahathir afford not to attend? I think he would be more heavily criticised by the Malays if he did not attend.

Some have said that he should have stopped such a congress. Maybe, but if word got out that he scrapped the congress, it would also reflect badly on him. Anyway, if you had  listened to his speech at the congress, a large portion was him asking the Malays to self-examine and to improve themselves.

Sure, there were the usual racial remarks, which are to be expected in a setting like that. For that, he is seen fortifying his racist image?

In summary, there is no shortcut to navigate our current socio-political quagmire and it would take a couple of generations to fix it. But we need to start somewhere and I believe the journey will be worth it. We need the younger generation to inculcate the right values before they assume leadership positions.

Enough of vilifying Mahathir. He only wants what is good for Malaysia. He is not power-hungry because he willingly resigned twice as prime minister. Call him a racist but don't forget many non-Malays also made it big during the 90s economic boom, especially the property boom.

Yes, you say it’s because of the hard work of the non-Malays, but the fact remains that the environment and government regulations enabled the non-Malays and also the entrepreneurial Malays to succeed.

Prominority: @OrangePanther1466, well, you missed the elephant in the room. Mahathir promised many times to pass the baton to Anwar. It's blatantly clear he didn't want to fulfil the promise, period. That is one deed that made all Malaysians disappointed in his behaviour.

You know very well Anwar was the strong link in bringing all the parties together and brought the curtain down on BN. Anwar, abused physically, mentally and humiliatingly, patiently worked hard to bring PKR as the most popular party which won 48 seats. Who else deserves the post, other than him?

Mahathir should have stood his ground. The Malay Dignity Congress could have been avoided. However, you slice the merits of him, it was still unacceptable. Anyway, thanks for the comment. God bless you.

RZee: I agree with Thayaparan and that the behaviour of DAP is less than to be desired. They are playing the field but this cannot be if on one side is their loyal partner and the other side is the opportunist and liar, Mahathir.

Haven’t they learned their lesson? Didn’t Mahathir play them and all of Harapan as clearly pointed out by DAP leader Ramkarpal Singh?

All the Harapan component parties should speak out and give their support for this coalition clear and unequivocal. The people need to see and hear unity among the opposition.

GreenMoose9952: With hindsight, we can all agree that Mahathir’s cynical disposal of former prime minister Najib Abdul Razak played perfectly into the hearts and minds of most Malaysians who hungered and were desperate for a change.

Dr M’s prescription - sweet as honey in the mouth but bitter and awful in the stomach. Sigh, a hard lesson. Hopefully, we will not be fooled again the second time around.