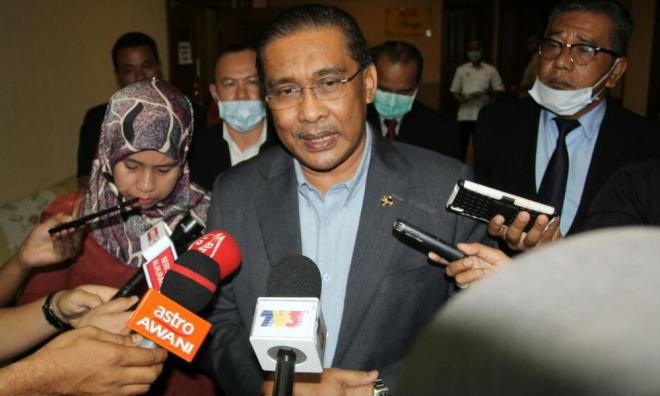 YOURSAY | So PAS is okay with ousting 'His Majesty's govt' in February?

YOURSAY | 'PAS should accept other people doing the same as they did.'

PAS calls for 'His Majesty's government' to unite

IndigoTrout2522: Much of today’s problems would not have happened if then prime minister Dr Mahathir Mohamad had responsibly kept his promise to follow the mandate in GE14.

Instead, he resigned and tried to remain as PM with the absolute power to select any MPs, regardless of parties, he wanted to serve in his cabinet. When his plot failed, he lost power and position. He was just too selfish and power-greedy.

Secondly, if Prime Minister Muhyiddin Yassin had agreed to a vote of confidence in Parliament soon after he assumed the position, we would not be having this instability, uncertainty and chaos. Are power and position so important to these politicians?

Now, opposition leader Anwar Ibrahim is accused of trying to restore the GE14 mandate in the midst of a pandemic. What about Muhyiddin? Did he, Azmin Ali and their allies care about the pandemic when it was beginning to spread in February/March?

The situation now is so muddy. Umno, PAS, Bersatu and PKR are all trying to get the upper hand. The end loser is the rakyat, but unfortunately, this situation needs to be resolved for the country to move forward.

One other final point is that Malaysia has a constitutional monarchy, not an absolute monarchy. The yang di-Pertuan Agong has to follow the Constitution. Even if Anwar has the majority, Muhyiddin does not have to resign until he loses a vote of no-confidence in Parliament.

Of course, with a slim majority of only three, the government would not be stable or functional. Hopefully, these leaders can come to a consensus.

Sayonara MY: The bad blood between Umno and Bersatu has gone too far for them to reconcile. Very soon, PAS will also be in Umno’s bad books.

The way it’s going, there will never be peace among these parties. It’s only a matter of time they will break up. While all these tugs-of-war are going on, the rakyat are the ones who will suffer.

GPS is the only one that can save the day. If they align themselves to Pakatan Harapan, at least a proper government can be formed to run the country till the next election. Then the mandate goes back to the people.

Heron: If the present government had taken, considering the circumstances of its ascension to power, a vote of confidence motion at its first inaugural secession of Parliament, the prevailing disquiet concerning its present status would not arise.

It was quite beholden, some think, on Muhyiddin to have effected a timely vote. He disappointed many. As it is often said, “let no man trust in blind prosperity”.

Omar Iz: PAS secretary-general Takiyuddin Hassan makes it sound as if his party has many seats. They don’t. They are part of a coalition of losers and those who jumped ship for God-knows-what reason.

Collectively, they have, at best, a three-member majority in Parliament; and, they are shaky from conception.

Here's the thing. One could ruin a coalition through deceit, but could deception be the tie that binds? Nope! Let's wake up to this reality.

Here, you see a sleight of hand and an attempt to play the royalty card. Anwar's move, even if he ultimately fails to achieve his aim, has been successful in making clear the divisions within the ruling coalition.

Apanakdikato: Well, Takiyuddin, this country belongs to the rakyat, not to any particular person of your liking.

Tell us, Takiyuddin, which part of the Constitution says that the law does not apply equally to PAS, such that an ordinary citizen who breaches the movement control order (MCO) rules goes to jail, but the same does not apply to PAS politicians?

Tell us, Takiyuddin, which part of the Constitution allows PAS politicians to belittle people of other faiths and race, and get away with it?

Tell us, Takiyuddin, which part of the Constitution says that only people coming from your own religious group can lead the country, even when they are incompetent and corrupt to the core?

By the way, why are PAS leaders so fond of buying luxury cars and goods made by Christian countries? PAS is nothing more than a parasite party full of hypocrites.

Newday: Takiyuddin, we do not have peace and harmony when there is one rule for politicians and the rest of us actually have to obey the law.

You elevate yourselves above us and make heroes out of your own when they broke the law. You prefer a system where elections do not happen. Democracy and you do not mix.

Every day, that tenuous federal floor rug is inching closer to being pulled out from under you and your power-mad cohorts. May the rug be completely yanked out.

Capo: Indeed, the Harapan government was also entrusted by the previous Agong to form "His Majesty's government"

Why is it all right to collapse "His Majesty's government” in February this year but not now? Malaysia practices constitutional monarchy, meaning we have a Parliament.

If a sitting PM loses majority support in Parliament, it’s the duty of the Agong to appoint a new prime minister. Plain and simple. Get a taste of your own medicine.

Léon Moch: Every government formed is “His Majesty's government”, including the Harapan government PAS helped topple.

So, if PAS felt it was fine to topple His Majesty's government a few months ago, then PAS should accept other people doing the same as they did.

BrownRabbit6629: When Harapan was in power, PAS did not talk about unity but instead resorted to race and religion to create hatred among the rakyat.

After they conspired and brought down the previous government via the backdoor, the same leaders now talk about unity.

Obviously, these PAS leaders, after gaining positions, are too worried to lose them should a new government be formed.