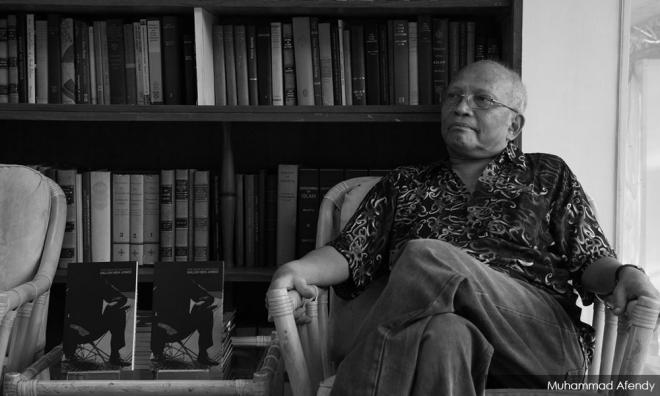 Literary icon Salleh Ben Joned passes away, but his legacy lives on

Poet, essayist, playwright and actor Salleh Ben Joned passed away this morning, but the 79-year-old’s unrivalled legacy in Malaysian literature lives on in his work, family, friends and fans.

Known as the “bad boy of Malaysian literature”, he is famed as much for his sharp wit and critical views as he is for his controversial antics.

Born in 1941 in Malacca, Salleh left Malaysia in 1961 under a Colombo Plan Scholarship to study Arts at the University of Adelaide, Australia.

He later moved to Hobart, Tasmania, after marrying his first wife Ariel Salleh. After more than a decade Down Under, he returned to teach at Universiti Malaya.

At university was where Malachi Edwin Vethamani met Salleh back in 1975 when the latter was his English literature lecturer.

Now an English literature professor himself, in part due to Salleh’s influence, Malachi recalled how the poet was the most unconventional and refreshing of lecturers.

“He would come to class usually late but he did arrive. He was always very exciting, very intriguing, very unconventional.

“Those days smoking was allowed on campus, so he will sit there and suddenly ask his students for a cigarette. Then he will be sitting on his (lecture) table, smoking and sharing his thoughts on what he was reading,” Malachi shared with Malaysiakini.

“He did not have lecture notes to read (from), he had it all in his head. It was nice to have a very thought-provoking lecturer who would make us think about what he was saying,” he added.

The student and teacher later became friends. He even named his book on Malaysian poems after Salleh’s poem Malchin Testament. Malachi’s other favourite poems by him are Spirit of the Keris, Ria, Harum Scarum and A Hymn to My Sarong.

“There will always be the one and only Salleh Ben Joned. Certainly, inimitable. A Malaysian we can be proud of,” he said.

Salleh, who wrote in both English and Malay, was known for challenging racial, religious, sexual and cultural norms as well as power structures in his work.

He published several books, including The Amok of Mat Solo and Sajak Sajak Salleh: Poems Sacred and Profane. In the 1990s, he had a candid, long-running newspaper column in the New Straits Times, titled As I Please.

In 1974, Salleh ruffled feathers when he publicly urinated at the opening of the “Towards a Mystical Reality” exhibition by artists Suleiman Esa and Reza Piyadasa. Apparently in protest of the artwork.

Thor Kah Hoong first met Salleh in the early 1970s when he was a Master's student at Universiti Malaya.

In his six years at the institution, they would become close friends and as he called it, “intellectual mates”.

“Salleh was a force of nature, an awesome intellect who had no patience for cant or hypocrisy. And he had to challenge inanities.

“He has been labelled many things, including ‘apostate’, ‘blasphemous’ and ‘sacrilegious’ for his writings on religion.

“In his defence, Salleh was always prepared to quote hadith and sura and Muslim scholars to answer intellectual challenges, but usually all he got was emotive rejection without an engagement of ideas,” Thor rued.

In her podcast about her father’s life, Anna Salleh said he suffered from manic depression and self-doubt in his later years.

“In the years that followed, my father sometimes panicked about growing older, feeling like he hadn't achieved anything,” she said.

He ultimately found respite from city life by moving back to his village in Malacca.

On Twitter, Malaysians began paying tribute to Salleh, many quoting his works.

At 1pm, his name was a trending topic, indicating many were tweeting about him.

In a Facebook page run by Anna, she said he had been experiencing breathing difficulties since Tuesday at home in Subang Jaya and was later warded at the Universiti Malaya Medical Centre.

He died at 1.21am this morning, from heart failure.

Only close relatives will be allowed for prayers and final rites due to conditional movement control order regulations.

His life story was recently produced as a two-part podcast entitled Salleh Ben Joned: A Most Unlikely Malay by the Australian Broadcasting Corporation. Listen here.