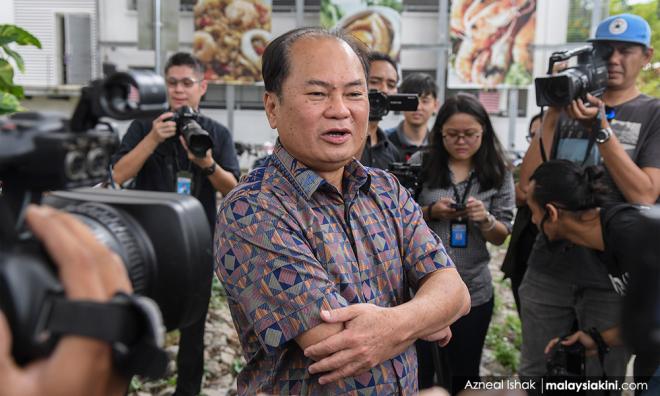 YOURSAY | Use of sedition law against Liu mind-boggling

YOURSAY | ‘This is simply driven by a desire to smear DAP in the eyes of the Malay voter base.’

MS: Sungai Pelek assemblyperson Ronnie Liu’s arrest, coming in the wake of the move by the three leading lights of Bersatu to "induce" the Yang di-Pertuan Agong into carelessly proclaiming a state of emergency, is significant.

And in keeping with the spirit of the action, the editors of all news media, online and print, who reported on the demonstrations against the Thai king should be similarly arrested.

Who knows what they had in mind when they described the loud and persistent demonstrations with pictures and newsreels of placard-waving crowds displaying their unhappiness against the monarch?

Which is why nothing short of arrests and lengthy interrogations will reveal what was in their minds.

And while they are at it, I think it will be sending a timely message if one Dr Mahathir Mohamad is also arrested for inciting Malaysians against the royalty in 1992.

I don't know if there is a statute of limitations preventing the authorities from acting against such flagrant and concerted incitement, which include hostile stories in the New Straits Times and speeches by several MPs from Umno.

Their words and actions have all been preserved for reference in the Hansard and on the web.

GreenViper4010: This whole sad affair is simply driven by a desire to smear DAP in the eyes of the Malay voter base.

There is no substance to the “charge”, and it is motivated by a desire to create publicity around purported “disrespect” to Malay institutions, religion and race. Sedition is simply a red flag label to heighten the publicity.

What stupidity. What a waste. What a shame.

Proarte: Home Minister Hamzah Zainudin's fingerprints are all over this scam. There is simply no logic to this arrest.

What did Liu say which was seditious? Yes, the Bangkok protestors did say no to their king and this was widely ventilated in the world media. They want to limit the powers of the Thai king.

What is the link with Malaysia and our Agong? There is none, so there is no need to waste police time. Our focus should be on dealing with the Covid pandemic and not manufacturing bogus issues to persecute the opposition.

Hmmmmmmmm: I am quite sure the court will only take a person's comments at face value. It is not for them to delve into what the person was thinking when he posted those comments.

In any case, it will be impossible to prove anything sinister here as Liu was merely saying what has been reported widely in the newspapers.

Eyes Wide Open: I really wonder why Liu needed to post that on his Facebook when it has nothing to do with his constituency or even us.

Why does he need to stir up matters, or be insinuated as stirring things up, when he should be concentrating on helping his constituency and the Selangor government overcome the Covid-19 and economic crisis?

I firmly believe in freedom of speech. But we should be responsible for what we write. I am not saying he's wrong but just questioning the purpose of that post.

That said, I also disagree that he should be arrested for sedition and it is heavy-handed of the police.

But back to my point, what is the real purpose of his post? To tell us what's happening in Thailand? Did we vote a guy into the office so that we know what demonstration is going on around the world rather than serving the constituencies here?

OrangeCarp6769: @Eyes Wide Open, posting what he likes on Facebook doesn't equate him to slacking and not doing his work for the constituency. To me, these are two different matters.

I'm less concerned about what's the intention of every MP posting about their personal/non-personal opinions in FB/Twitter/TikTok/Instagram, but worried by the simple fact that the arrest was made without any basis or solid reason.

Since when has it become a priority that every single social media posting be analysed for possible seditious intention?

Ipohcrite: I thought the police knew better than to waste their precious time investigating baseless police reports. Well, apparently not.

I think those who lodged the police reports should be charged with making frivolous reports and abuse of process. Otherwise, those inclined on creating political mischief would be emboldened to continue their shenanigans.

The Attorney-General's Chambers should take heed of such developments and act purposefully to throw the book at them. No public institution should be indebted to or be misused by any political group or individuals.

If there is malicious intent, they should be charged for false reporting. In this way, there will be less of this type of police reports.

Farmind: Make sure the police arrest the editors and owners of all the mainstream media as they reported similar news.

Don't forget the thousands and thousands of people reporting on Facebook, WhatsApp and Twitter, too. They are all allegedly guilty of sedition by talking about the king of Thailand and his poodle.

AnakJB: This is a political battle to continue demonising DAP for being anti-Malay and anti-royalty. Unfortunately, this loose cannon, Liu, will not fail to shoot off his mouth and provide the opportunity for them.

To me, the statement made by Dewan Negara president Rais Yatim questioning the attorney-general, and indirectly inferring the state of emergency is the call of the cabinet (and that the Agong shall act in accordance with the advice of the cabinet), is a more clear-cut case of sedition. Why wouldn't he likewise be investigated?

CucuMalaysia: Rais Yatim's questioning is not only seditious to the Agong but to all the rulers whom the Agong consulted on the emergency issue. This is more serious as it inferred all nine sultans and not only the Agong.

Newday: Branding is one thing. Truth is another.

Have you even read or listened to what some eminent Malays are now saying - that it was a multi-generational fairy tale to politically demonise DAP? Mahathir is one of those that admits his past sins in this. I am ashamed of some of my fellow Malay Malaysians.