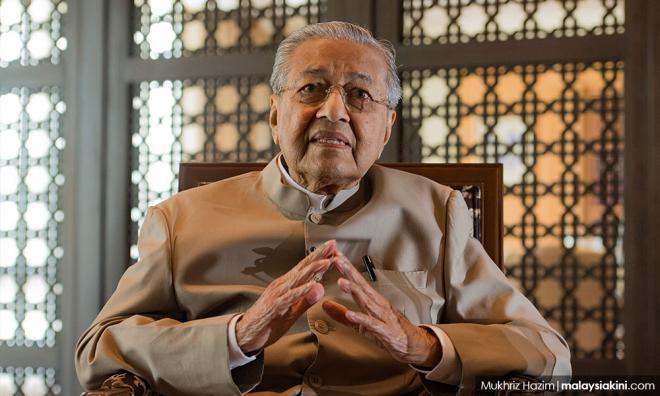 YOURSAY | Dr M, never any justification for saying there’s a ‘right’ to kill

YOURSAY | ‘The Almighty does not need us feeble beings to defend His honour.’

COMMENT | Row with France - why is Mahathir so full of hate?

Vijay47: I shall refrain from going into Dr Mahathir Mohamad’s arguments in his proud justification of the gruesome killings in France.

It would be futile and foolhardy for me to do so considering the depth of the logic he has displayed, a level not encountered in even primary school dropouts. What is there to comment on if this is what a political leader, a former prime minister, a man in his 90s, can produce in defence of his religion?

To Malaysians, Mahathir’s statements are not new, though shocking only in degree. Foreign Minister Hishammuddin Hussein and now Mahathir, Umno’s top leaders, past or present, have clearly revealed not just to France but to the whole world what some Malaysian Muslim political leadership is capable of, the kind of extremism they harbour.

There would certainly be some who would support him, but does Mahathir really expect to earn widespread admiration for his insane views?

On the contrary, even at the local level, many Muslim leaders would shun him when he has gone so far out on a limb to voice crazy suggestions. Does anyone think that Umno leader Tengku Razaleigh Hamzah, Amanah leader Mohamad Sabu, or even PAS leader Abdul Hadi Awang would want to sit with Mahathir to discuss Muslim unity or even mundane issues?

For sure, there are Islamic extremists who take immense pleasure in slicing throats and raping children, but these are savage aberrations that the bulk of Muslims and humankind do not share. All that Mahathir has succeeded in is to reveal that he is a leprous pariah.

Revered Christian figures have been mocked and insulted, so have Hindu gods and less frequently, Buddhist elements. Do Christians, Hindus, Jews, or Buddhists take to slaughtering people for perceived insults?

Malaysiakini columnist Mariam Mokhtar asks why Mahathir is consumed by this unmitigated hatred. I would hazard that religious fervour cannot be the reason. Mahathir is a psychoanalyst’s delight, many of the demons torturing him being focused on the fact that for all his Malay bravado, he will always remain an Indian from Kerala.

For comfort, he can enjoy the company of Islamic preacher Zakir Naik.

Business First: The killing of innocents, regardless of religion, Christians, Hindus, Buddhists, Yazidis, and Muslims, is horrible, and at times like these, normal rational human beings give comfort and consolation to the victims. Like what happened in New Zealand. Christians stood in solidarity with Muslims.

In Malaysia, we have Mahathir who blames France's colonial past to suggest that killings of millions more could be justified, so in some perverse way is he saying that one should be grateful that this has not happened? It’s madness.

I am sure in many civilised countries with "hate speech" laws, this would qualify as "hate speech". However, considering the Malaysia of today, we know even if there are such laws, I doubt anything will happen. Because in Malaysia, we have "no double standards". "All are equal before the law", except that some are more equal than others.

I am not sure if Malaysians are aware that race and religious supremacists are mirroring Nazi German ideology in many ways. Its evil seed has taken root across generations.

Mahathir's comments and the silence of Malay Muslim leaders to condemn atrocities by Muslim extremists is troubling. It is not that they have no sense of morality; when the New Zealand mosque massacre occurred, we had the proverbial beating of breasts, etc.

Malaysian Bulldog: Well said, Mariam. Whilst I do feel that freedom of expression must be coupled with a sense of social responsibility, Mahathir's remarks are so incredibly archaic in tone it is shocking. And ditto that of Turkey’s President Recep Tayyip Erdogan.

Erdogan attacks French President Emmanuel Macron's mental acuity instead of being more substantive and perhaps, talk to Macron about what is causing such horribly violent actions by certain individuals.

No, Erdogan and Mahathir come across as backward thinking, irrational people who instead of trying to help find peaceful solutions, display this siege mentality that promotes hate, divisiveness, and mistrust amongst Muslims towards non-Muslims.

Noor M: Dear Mariam, what is the crux of your argument here - what Mahathir said or himself?

It seems you wrote more on Mahathir than what he said. We had the worst attack on Muslims in mosques in New Zealand some time back. Did any Muslim leader condemn the Christian religion? All we did was condemn the person.

That’s what Macron should have done, condemn and curse the doer, the guy who was crazy to do such an act. Only those who are mad and insane will kill another, let it be on whatever reason that is.

So Mariam, I appreciate your view(s), and you are entitled to one, but don’t let hatred lead you, then there will be no difference between you, Mahathir, the killer and Macron.

No Fear Nor Favour: @Noor M, Mariam is rational. You only read between the lines. Just go through a second reading. After which, dissect the contents and then think rationally before forming an opinion of her views.

It’s unfair to conclude that she bears hatred when she only speaks the truth without fear nor favour. Mahathir is one desperate individual who is losing his popularity and judgement.

In desperation, he is making remarks unnecessarily without a second thought, which may result in uncalled repercussions to our country. It’s unbecoming of a statesman.

AT-SIXX: Over thousands of years, religious wars have killed many - mostly the innocent. There's no end to killing each other, and no point going back to history to feel aggrieved or justified.

Religions are good - the problem is men who abuse them and justify their actions in the name of the Almighty.

If you think about it, the Almighty does not need us feeble beings to defend His honour. Those who kill in the name of the Almighty are an embarrassment to Him. Leaders who do not promote peace are even more embarrassing.

The Truth Is Out There: I believe Mahathir’s statement was misinterpreted. We must read the following sentences after his quote which states:

"But by and large the Muslims have not applied the ‘eye for an eye’ law. Muslims don’t. The French shouldn’t. Instead, the French should teach their people to respect other people’s feelings."

Beman: @The Truth, what he wrote: “Muslims have a right to be angry and to kill millions of French people for the massacres of the past.”

The next few sentences that you quoted just said that those whom he deems to have the "right to kill French people" had not exercised that right yet.

So, in what way was he misinterpreted? He stated that a group of people have the right to kill millions of French people, just any French people.

Newday: Mariam, I always enjoy your writing - no holds barred. But I do have a concern regarding your comment that “Malays and Muslims eye non-Malays and non-Muslims with suspicion”.

We cannot be so generic with these labels. You are reinforcing the stereotype. Thirty percent of Malays who are Muslim voted for a better, more harmonious society in GE14. We didn’t quite get it but were closer than before.

Most of us have multi-racial and multi-religious relationships. We are Malaysian first and Malay second. We may not be the majority, but we are many.

Tens of thousands of Muslims protest over Macron remarks after killings in France
30 Oct 2020
Dr M claims 'kill millions of French' remark misrepresented, expresses disgust
30 Oct 2020
US ambassador 'strongly disagrees' with Dr M
30 Oct 2020
COMMENT | Row with France - why is Mahathir so full of hate?
30 Oct 2020
Twitter deletes Dr M’s tweet after flagging it for 'glorifying violence'
29 Oct 2020
Muslims have a right to be angry at France - Dr M
29 Oct 2020