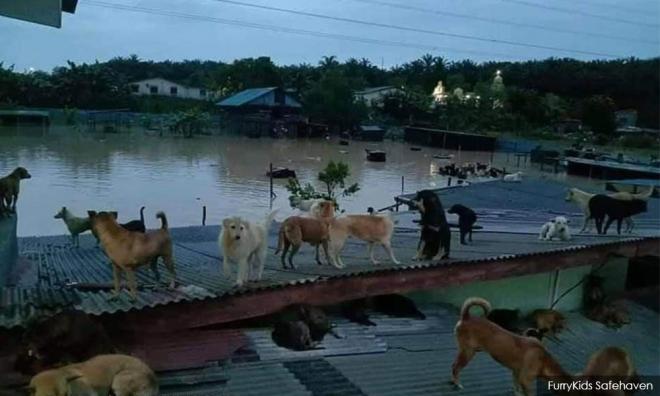 The Persatuan Penyelamat Haiwan Terbiar Furrykids Safehaven animal shelter is appealing for help after 54 dogs, including a newborn pup, drowned in flash floods that hit the home which is based in Seremban.

"The floods struck our shelter early morning on Nov 4. The floodwaters rose fast and the current was strong. The water level reached the top of the shelter gate which is more than five feet," said Furrykids in a post today.

It posted an aerial photograph of the Kuala Sawah and Rantau area which was affected by flooding of the Sungai Linggi.

The animal shelter, which was established in December 2017, rescues street dogs in Seremban and is currently home to around 1,750.

Sathiavany Madhavan, the secretary for the home, told Bernama that water began rising at the shelter at 3.30am following a downpour.

“Earlier today, our worker who stays at the shelter informed us that it was getting flooded and the water level had risen well above 4ft within 30 minutes.

“We ordered him and our six other workers to release the dogs from the cages as we did not have enough staff members to carry the cages to safety,” she said.

Sathiavany said many of the dogs managed to climb the roof of the shelter and waited there but many others panicked and were swept away by the swift-flowing waters.

“Many dogs are believed to have been swept away into the nearby river,” she added.

Furrykids also reported damage to food stocks and other supplies.

It hopes to raise RM350,000 to build a better shelter at another rented location in Kuala Sawah, Seremban, which is already under construction.

“However, because of this incident, we have requested the contractor to expedite work so that at least the dogs can be moved there first. Now, we fear that the cost has shot up by another RM100,000,” said Sathiavany.

Sathiavany can be contacted at +60126012030 or interested parties can look up Furrykids' Facebook page for more details.

The flood is said to have affected 2,000 victims from 15 areas, including Seremban and Rembau districts, with a total of 77 flood victims from 16 families being moved to evacuation centres as of 4pm.