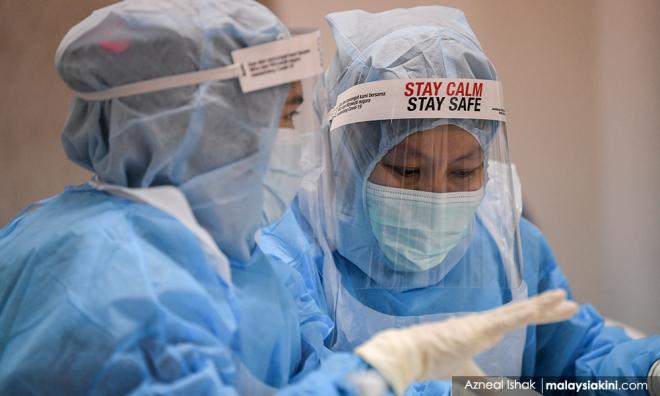 The bulk of the new cases today was contributed by Kuala Lumpur, which recorded 475 new cases, exceeding Sabah which registered 381 new cases.

Health Ministry director-general Dr Noor Hisham Abdullah, in a statement, explained the bulk of the new cases in Kuala Lumpur were from dormitories of foreign workers.

He said a total of 460 cases in Kuala Lumpur came from the Damanlela construction site cluster, involving an under-construction mall in Damansara.

For the seventh consecutive day, the number of new daily Covid-19 cases in Peninsular has exceeded those in East Malaysia.

Previously, East Malaysia made up the bulk of new cases as Sabah was the epicentre in the third wave of the Covid-19 pandemic in the country.

However, Sabah has seen significant improvement while infection rate in Selangor and Negeri Sembilan remain stubborn.

Leading indicators, as of today, in brief:

Patients in intensive care = 104↑ (1 more than the previous day)

The three new deaths, including a child, put the death toll at 309.

Details about the three deaths are as follows:

Patient 45,459 (Death 307): Eight-year-old Malaysian girl. Passed away at Tawau Hospital, Sabah. Did not have any pre-existing conditions.

All of the six imported cases involved non-citizens coming from India (3), Bangladesh (1), Nepal (1) and Indonesia (1).

The breakdown of the new cases by state and territory is as follows:

Pahang and Terengganu did not record any new cases today.

The new clusters are the Plaza cluster and Jalan Kalabakan cluster in Sabah and Jeri cluster in Johor.

The Plaza cluster involves the district of Kota Kinabalu. The cluster was traced to Patient 42,299 through a screening of symptomatic persons on Nov 11.

Contact tracing revealed another 11 infections, all of which were reported today.

The Jalan Kalabakan cluster involves the district of Tawau. It was traced to patient 31,309 who was detected through testing of symptomatic persons on Oct 31.

Contact tracing found another 21 infections, three of which were reported today.

The Jeri cluster involved the districts of Kota Tinggi, Mersing and Muar in Johor.

The index case was discovered at the international crossing between Malaysia and Singapore on Nov 6.

Contact tracing on the Malaysian side of the border found a total of 26 cases from this cluster, three of which were reported today.

Another 609 people are awaiting their test results.