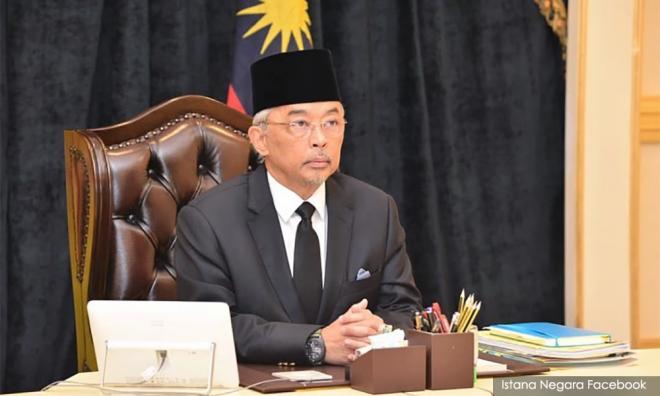 "After considering (memperhalusi) the explanation from the Prime Minister and briefings from Chief Secretary to the Government Zuki Ali, Attorney-General Idrus Harun, Health director-general Dr Noor Hisham Abdullah and Election Commission (EC) chairperson Abdul Ghani Salleh, His Majesty was satisfied that there's a need for a Declaration for a Proclamation of Emergency under Article 150(1) of the Federal Constitution to cancel the Batu Sapi by-election.

“With this proclamation, any proceedings for the Batu Sapi by-election will be discontinued to prevent a fourth wave of Covid-19 and a new date will be determined for the by-election.

“Therefore, His Royal Majesty has assented to the proclamation of emergency for P185 Batu Sapi, Sabah, as a proactive measure to curb the Covid-19 outbreak,” the Comptroller of the Royal Household, Ahmad Fadil Shamsuddin, said in a statement today.

Nomination day for the Batu Sapi by-election was originally slated for Monday next week. The by-election was called following the death of its incumbent Liew Vui Keong last month.

Subsequently, during a live telecast, Prime Minister Muhyiddin Yassin assured that the livelihood of Batu Sapi folks would not be affected following the proclamation of emergency.

"The proclamation of emergency is only to call-off and postpone the by-election to safeguard the people's lives.

"The livelihood of Batu Sapi folks will not be affected. There's no curfew or administration ala army in Batu Sapi.

"The government administration, economic and social activities will continue according to the new norm practices and standard operating procedures (SOP) under the conditional movement control order," Muhyiddin said.

Separately, Bernama quoted Inspector-General of Police Abdul Hamid Bador and Chief of Defence Forces Affendi Buang saying there will be no change in the deployment of their personnel in Batu Sapi despite the emergency proclamation, which will still adhere to condition MCO rules.

However, Hamid said the police are prepared to enforce the enhanced MCO at any location in Batu Sapi if the National Security Council deems it necessary.

First, learning from the recent Sabah snap polls which had triggered the third wave of the outbreak in the country, Muhyiddin said the by-election would pose a health threat to the public.

"Although the EC could introduce strict SOP, poor compliance to the SOP (as seen in the state election campaign) would make it difficult to contain the outbreak," he said.

Second, the EC staff were worried about their health, resulting in EC managing to hire only 143 against the 837 staff needed for Batu Sapi by-election.

Next, the inter-district movement among EC staff and voters could not be avoided and this would increase the risk of Covid-19 outbreak to other districts in Sabah, he said.

Fourth, Muhyiddin said the senior citizen voters, comprising 7,377 people or 22.3 percent of voters aged above 60, would be at risk.

For the record, there are 32,962 registered voters in Batu Sapi.

For the record, based on EC data, there are 32,962 registered voters in Batu Sapi, where 3,170 whose addresses are outside the constituency, including in West and East Malaysia.

A total of 16,000 voters have a general address with no house number, which makes it difficult for postal voting.

Lastly, he said the possible outbreak would affect the social and economic activities of Batu Sapi folks as well as Sandakan.