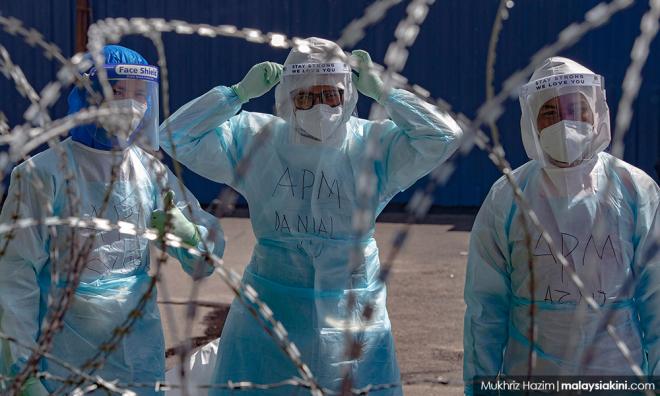 The ministry also reported that 110 Covid-19 patients are in intensive care, exceeding the previous record of 108 set on April 3.

A third of the new cases in Sabah were related to detention centres.

In the Klang Valley, half of the new cases were attributed to the Teratai cluster, which involved the Top Glove factory in the Kapar district, Selangor.

A large number of new cases were also discovered in a new cluster in Selangor known as Kapas BJ, involving the Hulu Langat district. According to the Selangor Health Department, the factory involved was located in the Semenyih locality.

The cumulative Covid-19 death toll for the country had reached 326. The death toll in Sabah alone had reached 184 or 56.4 percent of the national total.

Pahang, Terengganu, Putrajaya and Perlis did not report any new cases.

The Health Ministry today classified four new clusters. The index case for the aforementioned Kapas BJ cluster reported symptoms on Oct 28. So far, 76 cases have been attributed to this cluster.

The Bah Bercham cluster involved the Kinta district in Perak. The index case had recently returned from Sabah and tested positive on Nov 13. Five cases have been attributed to this cluster.

The Kiambang cluster involved the Mersing, Kota Tinggi and Johor Bahru districts in Johor. The index case reported symptoms on Nov 16. Nine cases have been attributed to this cluster thus far.

There are 165 active clusters in the country of which 54 reported new cases today.

It is understood that his press briefings will only take place on Monday, Wednesday and Friday, coinciding with the National Security Council meetings on those days.