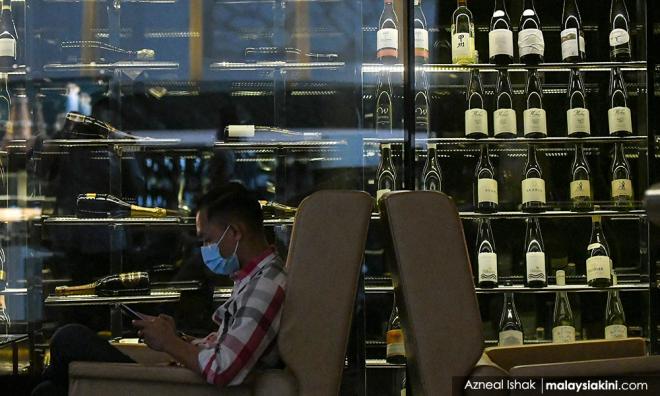 YOURSAY | ‘Muhyiddin needs all the help he can get, and doesn't care if policies cause hardship to businesses.’

Vijay47: By and large, consumers would not have really minded the restricted avenues where beer and liquor could be sold in Kuala Lumpur, we would have accepted that a little less of good cheer would not have particularly set our clock back too much.

And in any case, we can always cross over to Selangor and Petaling Jaya where saner minds can be expected to prevail.

But there is one little almost unseen giveaway in the pious justification put across by the mayor of Kuala Lumpur who announced that the decision was reached after consultation with various bodies, including the Federal Territories Islamic Religious Department.

What the hell does an Islamic agency have to do with an issue which they incessantly claim does not at all concern the Muslim community? Has the mayor decided that life, as we know it in Kuala Lumpur, needs to be governed by Muslim authorities?

We are all fully aware of the role that bodies like the Department of Islamic Development (Jakim) and Selangor Islamic Religious Council (Mais) play in ‘enhancing’ the harmony amidst the multireligious communities in Kuala Lumpur and the rest of the country.

We still vividly recall their savage opposition to Oktoberfest, Valentine Day cards, Heineken, and even Chinese New Year lanterns. Windmills to tilt at are so easily discovered within every shadow by these defenders of the faith.

So, what will their next contribution be? The mode of celebrating Thaipusam, the use of Latin in Christian worship, the colour of Sikh turbans, and sauce in kai fan (chicken rice)?

And Justice For All: Before I start, let me make this clear, I don’t drink. What do you expect when you put Federal Territories Minister Annuar Musa in charge?

Of all the problems we face in the city, this is the one he sees the most critical. We have potholes right in the middle of city roads, vandalism, homeless people, petty crime, drugs, and he is worried about what people buy and bring home to consume.

Doc: Let us face it; this Kuala Lumpur liquor sale restrictions issue has only one function. This is to make the PAS leadership happy and satisfy their party’s grassroots.

This move will show that PAS is actually contributing to the Perikatan Nasional (PN) government success in strengthening the ummah.

After all, PAS has been peddling the notion that alcohol (and DAP) is the mother of all evil and the cause of Malay society's downfall.

Don't ask me or the minority of Malaysians with some level of intellect to fathom how PAS' theory that non-Muslims consuming alcohol are detrimental to Muslims, but that is the story they have been peddling to their grassroots for years.

So, what will be the negative outcome for PAS in their short-sightedness in curtailing liquor sales?

1) Foreign investors will not look at Malaysia to invest for fear that the government has been taken over by Islamists, which is probably true;

3) A significant number of the non-Muslim voters will flock to Pakatan Harapan Plus, further strengthening their political power;

4) Tax collection from alcohol sales, which is significant, will plummet. And it is common knowledge most of the taxes collected goes towards keeping the civil service employed;

5) A lot of Muslims choose to work in industries that serve liquor which may eventually close down due to this regulation, thus putting a lot of people out of work.

So PAS, go ahead and take your much deserved victory lap.

Cogito Ergo Sum: This new curb on liquor sales has been put into place to please PAS. It is the start of things to come if the party is to be part of the new government of the day after the 15th general election (GE15).

Prime Minister Muhyiddin Yassin needs all the help he can get, and he doesn't care if his policies cause hardship to businesses that do not involve the Muslims/Malay community. This move is a clear indication of how desperate this regime is in maintaining its power.

We had some hope after GE14, former premier Dr Mahathir Mohamad and his band of brigands could not countenance a free and fair Malaysia where everyone had a fair go at life. We are here today because the rakyat was stabbed by the very people they entrusted their lives with. Never again.

BlueShark1548: The restrictions apply only to sundry shops, convenience stores and Chinese medicine shops. Other types of outlets can still sell liquor.

Kuala Lumpur City Hall (DBKL) did the right thing to minimise the sale of liquor by limiting its outlets. Anyway, liquor is not good for health and causes social problems.

Many grocery shops are selling cheap and poor quality liquors to our low-income groups, and this is one way of restricting its supply.

The Associated Liquor Merchants Association should provide statistics to back up its claims (that further restricting the sale of liquor could also contribute to an increase in smuggled spirits).

The public responsibility of these shops and medicinal halls is pathetic, and what they really care about is for some quick bucks.

Annuar and the Islamic authorities may have their agenda, but that is beside the point.

Any small effort or gesture to remind people of the ill effects of alcohol consumption and the devastating effect it has in "destroying" families is good.

Kawak: There is nothing surprising about policies and legislative control over matters relating to "haram" (prohibited in Islam) businesses in Malaysia. We have a Malay-Muslim majority PN government.

PAS, being part of the PN government, is in a hurry to implement those policies. MCA, MIC and PBS are fully responsible for putting religious bigots and racists at the helm of the government. What can MCA president Wee Ka Siong do now?