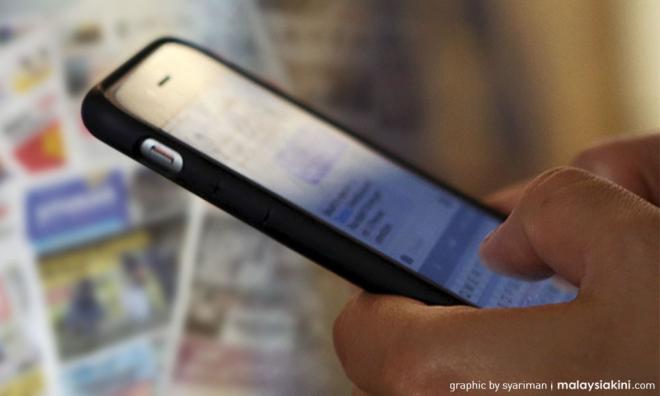 Iphonezours: Transport Minister Wee Ka Siong, I may not understand clearly the rules of cabotage but when there is only one dominant company without competition, it only makes work costly and time-consuming as shown by the figures for the repair time of the undersea cables.

At the end of the day, Malaysians will pay a higher cost and the country loses out. Why is it you can’t think about such basic stuff, and is that why this revocation of the cabotage policy exemption has been done so quietly?

Clearly your actions lately, from the Klang Valley Double Tracking project (KVDT2) to this revocation of sabotage exemption, shows your incompetence as a minister.

Sun: What a ridiculous move! A monopoly justified by "patriotism" will still harm the country and people. Monopolies are always a threat to consumer welfare.

But Wee, who is MCA president, won’t know that. He belongs to a party that has traditionally catered for ‘towkay’ interests, and has been roundly and repeatedly rejected by the electorate.

Public Transit Is Better Than Highways: A half-past-six transport minister taking matters into his own hands? Has he consulted even his own colleagues from the communications ministry or Communications and Multimedia Minister Saifuddin Abdullah himself?

Surely, they know better than what Wee is up too. Plus, when all the big tech giants are knocking on your door, you cannot just simply ignore them.

This action will only make Singapore much more important and competitive than ever compared to Malaysia, further degrading the value of the Malaysian ringgit against the Singaporean dollar.

Andy Vinodovich: I seriously don't understand why the politicians in this country are sincerely trying to make Malaysia regress technologically. I remember Myanmar between 2008 and 2010. It was the same scenario then, with a monopoly by a junta-led contractor.

Sometimes, we didn’t have basic internet for weeks. Why? And now, this. Soon we may even have power supply problems in Malaysia and all homes have to install generators and voltage stabilisers.

RainbowSnake: This is an international scandal. As big technology companies have pointed out, the inappropriate policy that had been decided by our government will also cause damage to our nation’s image, which will affect the decisions of other international tech companies to invest in our country and help boost our economy.

BluePanther4725: One by one, we notice how the backdoor Perikatan Nasional (PN) ministers fail at their job and subsequently harm the people and country.

All Wee does well is opening his big mouth condemning DAP but, when it comes to real work, he is totally incompetent.

Anthony Loke was a competent transport minister who has done a good job helping the people, especially with his My50 and My100 schemes. Gobind Singh Deo was a competent multimedia and communications minister who improved our internet services, making them more affordable and efficient.

The MACC should investigate Wee to check if there is any corruption and cronyism involved behind his decision that obviously hurts our economy.

Everything, from education, to finance, governance, business… everything is critically dependent on smooth, uninterrupted, and fast internet connection.

Only the most capable companies, the top in the world, should do the job. Think of the next generation!

Amoker: It is unfortunate that the needs of Google were the reason that this cabotage exemption revocation is being discussed.

This cabotage practice helps some of the oligopolies based in the peninsula as well as the big tycoons in Sabah and Sarawak. It increases the cost of product for Sabahan and Sarawakian consumers. Ships that can go straight to Borneo from China or Japan are instead forced to dock in the peninsula first.

Why are parties such as Parti Rakyat Sabah (PRS) or Sarawak BN not voicing out? While Google, etc, are important, the needs of Sabahans and Sarawakians are no less important.

Coward: That's the perceived standard operating procedure (SOP) in Malaysia - once a field becomes profitable, cronies will be taking your lunch so that people in the chain that you depend on can take a cut.

This is made worse by decision-makers not explaining their logic behind their moves and make abrupt decisions with no consultation.

P Dev Anand Pillai: And they want the younger generation to start technology start-ups in the country?

That is why it is clear that we are a nation that simply thrives in corruption, cronyism, and monopolies. All in the name of ensuring that a small coterie of cronies controlling everything.

Hmmmmmmmm: As soon as I see statements like the Malaysia Shipowners’ Association (Masa) congratulating Wee for his patriotism and "putting Malaysia first", I get a very strong feeling that the policy is not based on merits.

If the Malaysian company believes that it has got the job based on merit, it would never need to mention patriotism or putting Malaysia first in its message because that would give an impression that it got the job because of that.

Shovelnose: These clowns in leadership do not understand economics of scale if their lives depended on it.

Cronyism and how it helps preserve their short political life on top of the scrap heap while setting up their retirement fund in perpetuity is their only immediate concern. If you think they care about the nation and its people, think again.