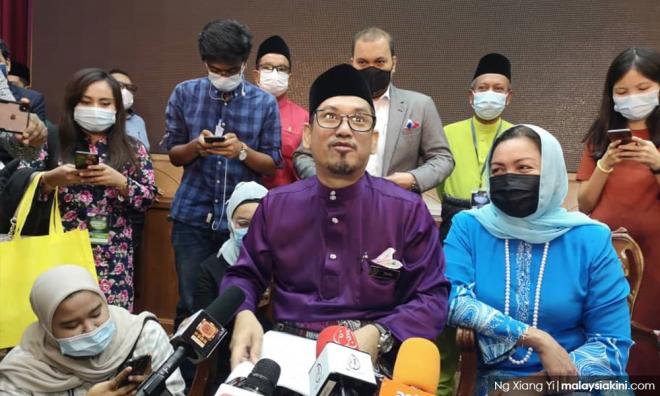 YOURSAY | ‘If they can backstab Harapan and Dr M, why are they surprised if they themselves are backstabbed…’

BusinessFirst: I thought there was to be no politicking due to the Covid-19 pandemic? Alas, Perikatan Nasional (PN), BN, and their supporters follow the principle "do as I say but not as I do".

Anyway, this is to be expected since word on the ground is that even Umno trusts the honesty of Pakatan Harapan, including DAP, more than Bersatu.

Of course, what do you expect when you are in a coalition with backstabbers? They had no qualms backstabbing Harapan to form PN.

If they can backstab Harapan and even their own leader, Dr Mahathir Mohamad, why would they bat an eyelid when they themselves are backstabbed?

Do you think Umno is stupid to just wait for Bersatu to strike? They did not stay in power for over 60 years because they are political idiots. Do not mistake being corrupt and dishonest for stupidity.

Perhaps we now understand why, in Johor, the PN government led by Umno is taking a more cooperative stand.

Perhaps they are trying to suggest to the Harapan opposition: "Better to be in the opposition with an Umno menteri besar than be in a Harapan government with a Bersatu MB."

WSK: A classic case of one Machiavellian crook who finally gets a taste of his own treacherous medicine. This Bersatu state assemblyperson for Chenderiang (Ahmad Faizal Azumu) was given the MB post.

In no time, he collaborated with Umno and PAS to quietly crash the Harapan state government on the condition that he keeps his MB post.

When you work with backstabbers, trust, dignity, integrity has no meaning. Good riddance!

IndigoTrout2522: After the 14th general election, Bersatu only had one seat in the Perak assembly, and yet they were given the position of MB by Mahathir.

This made no sense as DAP, PKR, and Amanah had more seats. Also, if a no-confidence vote could take place in a state assembly, why not in Parliament too?

BlueShark1548: @IndigoTrout2522, Muhyiddin just copied Mahathir. He ensured that the Sabah chief minister is from Bersatu. But it’s now time for Umno to show Muhyiddin who has the power.

OrangeHawk3664: This should teach Bersatu a lesson that they are not the biggest or greatest party in the PN coalition.

For an ‘ikan bilis’ party, Bersatu has unilaterally appointed their own to key and powerful positions to consolidate their hold on power.

They thought BN would kowtow to them like PAS; how wrong they were. PAS has never tasted federal power, only state power. This is unlike BN, who has governed for over 60 years.

BN is definitely no pushover like PAS, who has to suck up to Bersatu to enjoy power in Putrajaya. A really good turn of events which should be replicated in all states.

Dutch Lady: Outgoing Perak Menteri Besar Ahmad Faizal, the number two of Bersatu, is now no more the number one man of Perak. This is a fantastic blow to ‘abah’.

More to come from Umno from now. Bersatu must know Umno is not like DAP and PKR. Umno and Bersatu are both greedy for power.

Vgeorgemy: In the end, Bersatu secretary-general Hamzah Zainudin and supreme council member Azmin Ali couldn’t do anything in their own backyard to prop up their regime after they lost confidence in the state assembly.

Umno is on a path of revenge.

Anony.1548748615957: Congrats to the Perak state assembly for acting in a mature, admirable, and democratic manner to serve as a role model for Parliament and other state assemblies to emulate.

Gerard Lourdesamy: This is what democracy is all about and not the shameful obfuscation and obstruction going on in the Dewan Rakyat under the current subservient House speaker Azhar Azizan Harun and the ramshackle backdoor PN government.

The Perak state legislative assembly had redeemed itself after the shocking events of 2009 when then Pakatan Rakyat state speaker V Sivakumar was dragged out of the legislative chamber and incarcerated in a storeroom while a new speaker was elected by the then BN backdoor government.

As a Perakian, I am very proud of Perak Sultan Nazrin Shah who has once again proven to be a wise ruler and the epitome of a constitutional monarchy.

P_Mammen: A big thanks to the assembly speaker, Mohamad Zahir Abdul Khalid, for allowing the confidence motion.

He is unlike the Dewan Rakyat speaker, the artful dodger who refuses to entertain or allow such a motion.

McLovin: Serves you right, Faizal. This is what you get when you betray your friends in Harapan who stood by you in hard times. When you finished using them, you backstabbed them and joined those who you thought were more ‘righteous’ than Harapan.

Now, they are finished using you. They didn't just backstab you. They shot you in the back while hugging you. This time, running to the Istana crying and begging for your job back wouldn't work anymore.

By the way, I hope they let you keep the Lexus.

Mano: @McLovin, no way. Give back the Lexus. The Perakians paid for it.

Oxymoronictendencies: I am not sure if this is good or bad. Anything that puts a dent in PN is prima facie good, but the unanswered question is what follows?