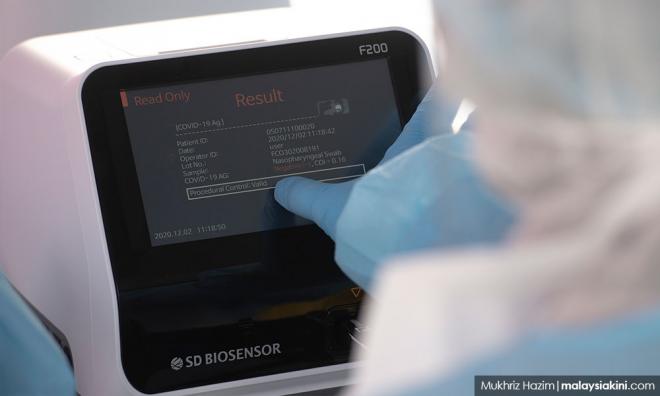 COVID-19 | The Health Ministry today reported a record-high of 2,525 new Covid-19 cases, with nearly half the cases concentrated in Selangor.

This exceeds the previous record of 2,335 cases reported just five days ago on Dec 26.

In a statement, Health Ministry director-general Dr Noor Hisham Abdullah said most of the Selangor cases were detected from existing clusters and through contact tracing of Covid-19 patients.

The latest fatalities put the national Covid-19 death toll at 471, representing a mortality rate of 0.42 percent.

All eight fatalities were Malaysian citizens in Peninsular Malaysia. Their details are as follows:

No RT-PCR test figures were available today. Noor Hisham usually provides these figures only on days when he holds press conferences. His next press conference is expected next week.

Of the 2,525 new cases reported nationwide, 13 were imported while the remaining 2,512 were locally transmitted. The breakdown for all new cases is as follows:

Perlis is the only state that did not report any new cases and remains the country’s only “green” state.

According to Selangor Health Department figures, 52 of the 210 “other screening” in the state were comprised of people who had sought testing after developing symptoms, and another two were tested after developing severe acute respiratory infection.

Four cases were detected during health screening prior to taking up a job.

One was detected during post-mortem screening.

This includes five new clusters identified today, while another three have passed their monitoring period after no new cases were reported for 28 consecutive days.

The cluster with the largest increase today was the Seruling cluster, which is linked to a technology factory in Klang but has spread to 12 districts across Selangor, Perak, Malacca, and Negeri Sembilan.

The Penjara Jalan Harapan cluster had the next largest increase of cases. It is centred around the Kajang prison, but now spans 12 districts across Selangor, Malacca, Negeri Sembilan, Perak, Johor, and Kuala Lumpur.

The third-largest increase was the Teratai cluster centred around glovemaker Top Glove’s factory in Meru, which has spread to several districts in Kuala Lumpur, Selangor, as well as Putrajaya, and Terengganu.

There were 151 new cases in this cluster for a total of 6,227 cases out of 9,240 people screened. It is by far the largest Covid-19 cluster ever detected in Malaysia.

Another cluster that has seen a triple-digit increase was the Sungai Putus cluster in Klang and Kuala Selangor, which has grown by 113 cases to 1,120 cases.

As for new clusters, Noor Hisham said the Jalan Galah cluster was detected through a mass screening exercise at a factory in Klang.

The first cases were discovered on Dec 13, and 22 people have tested positive so far out of 90 people screened.

The Jalan Datuk cluster was detected after the index case in Putrajaya developed symptoms and sought testing, which came back positive on Dec 26.

The Kampung Baharu cluster in Pontian and Johor Bharu, Johor, was detected through workplace screening and reported its first cases on Dec 23.

A total of 35 people have tested positive out of 194 people screened, including three who are the family members of the workers.

The Pekeliling cluster in Johor Bharu was also detected through mass screening at a factory. A total of 27 cases have been reported beginning Dec 21, out of 185 people screened so far.

The Jalan Rasah cluster was detected after a 72-year-old man in Seremban developed severe acute respiratory infection and subsequently tested positive on Dec 23.

Contact tracing of the case revealed three generations of Covid-19 transmission through social and family contacts both in Seremban and in Putrajaya.

A total of 17 cases have been detected out of 47 people screened.

Michael Chong tests positive for Covid, MCA headquarters sanitised
31 Dec 2020
Philippine islands self-isolate after new Covid-19 variant found in Malaysia
31 Dec 2020
Battle against Covid-19 is not over - Dr Noor Hisham
31 Dec 2020
Police tracking down escaped Covid-19 patient from Tampin Hospital
31 Dec 2020
A doctor's guide on what to do if you get Covid-19 and told to stay home
31 Dec 2020