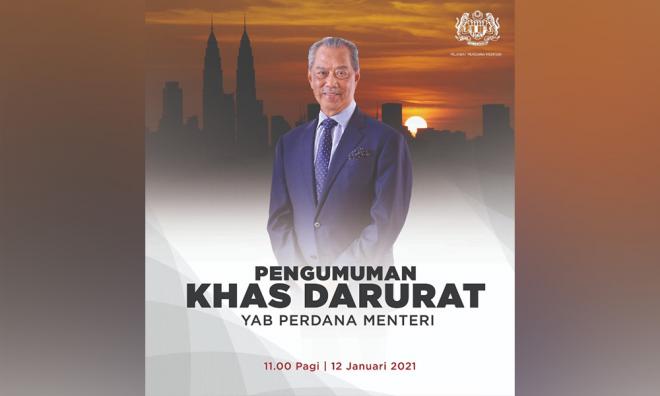 YOURSAY | Whose benefit is the emergency for?

YOURSAY | ‘MCO 1.0 had its own reluctant measure of success - without any emergency.’

King consents to emergency declaration, to be in force until Aug 1

Vijay47: This is an unbelievably cunning, and given the circumstances, possibly fatal ruse by Prime Minister Muhyiddin Yassin. In one fell swoop, he has removed the sense of urgency for the Covid-19 disaster and replaced it with a justifiable suspicion of political expedience.

In the former, the prime minister would have earned the people’s willing, even if weary, commitment to the new movement control order (MCO). In the latter, the people’s response could well be “to hell with it, it is the wolf-alarm again”.

Muhyiddin may argue that the declaration of emergency is necessary for the postponement of impending polls. There is no general election in the offing, the only one drawing close is the Sarawak state elections.

Is an emergency the only means to forestall state elections? I have no idea, perhaps constitutional experts can throw some light on this dark issue.

Covid-19? What Covid-19? The only objective of the emergency appears to be to delay elections and to shackle Parliament, making the prime minister answerable to none. And when a prime minister with no majority adopts this approach, the only conclusion is that he did it for self-preservation.

MCO 1.0 had its own reluctant measure of success - without any emergency. Nevertheless, it had its moments of shame through the antics of a turkey-relishing plantation minister and the spoiled-brat tantrums of a darling daughter.

This time, Muhyiddin has gone one better. No, 100 times better. He has pulled an emergency out of his hat.

Just one final question, Mr Prime Minister. In your telecast yesterday even if obviously pre-recorded, why did you not share with the nation that essential fact of the forthcoming emergency?

Jordan Tan: Whose benefit and survival the emergency is for? What was it that the prime minister was unable to do through the MCO – and that an emergency can – to contain and control the pandemic?

What additional measures does the PM want to introduce to further stop the spread of Covid-19 by declaring emergency rule?

Whose security is at risk? Why declare emergency only after the PM is left with the miserable support of only 110 MPs? This is clearly to prevent another more capable person to take charge of the crisis facing the country.

For lack of wisdom to offer solutions to overcome the spread of Covid-19, this is the convenient excuse to suspend Parliament and remain in power.

Just A Malaysian: Is Muhyiddin fighting Covid-19 or fighting for his political survival? Did politics influence the Covid-19 strategy or did Covid-19 influence politics?

Did the early opening up of interstate travel and economy a political chess play or was it based on science? As we sit at home with no income and no freedom, are we doing it for the country or are we just lamb being led around?

We will have many months to think about all this. God bless Malaysia.

Pokokelapa: Simply put, it is going to be hard times. Not to forget, the emergency can be extended. There is no more ‘thinking’ government. After all, they failed badly. This is the only way out of that failure.

The people are going to continue to suffer under these politicians as they continue to save themselves and nothing else. The last time it was because of former premier Dr Mahathir Mohamad, now it is because of Umno.

An emergency is such a drastic measure. A slippery road definitely. We can forget about foreign direct investments (FDIs). The economy is going to get a beating.

What a well-planned and silently executed move.

History will judge those who made these decisions. The impact of such decisions may affect the economy beyond repair. In the end, it is the people that will suffer the most.

Cogito Ergo Sum: Many small and medium enterprises (SMEs) will now have to close shop. This emergency seems politically engineered to suspend Parliament to avoid yet another vote of no confidence.

If SMEs close shop, they will be considered “collateral” damage for political expedience. This is the result of having an unstable government in power.

We are here today because of the shenanigans of one man.

Ir: I feel this is the best solution at the moment, considering the rising Covid-19 cases. MCO or conditional MCO is not working, that's for sure.

And if we are dependent on the "stringent" measures, it's not going to help simply because people are not following the rules. Covid-19 cases will still increase. Politicians crazy for power are using this uncertain situation to topple the government and call for snap elections.

With what happened in Sabah, we can only shudder at the thought of the resultant scenario if elections were forced to happen. God bless the wise Agong for consenting to it.

I hope Muhyiddin will keep to his word and allow GE15 to take place once the situation is better later in the year.

Meanwhile, let's all work together to overcome the pandemic with the standard operating procedure (SOP) in place and the impending dissemination of the vaccines.

IndigoHamster4797: In addition to Covid-19, we will face flooding in many areas for the next couple of months. As a country, we need to focus on dealing with Covid-19, fixing the aftermath of floods, and repair the economy.

I have decided where to vote (shift my voting district from Kuala Lumpur area to rural) and whom to vote. Maybe all of you should consider the same.

Bravemalaysian: What a wily masterful stroke by Muhyiddin. He has crippled all those opposed to him. I hope he makes use of this to handle Covid-19 rather than spend all the resources to strengthen Bersatu's position. The country is more important than any party.

Umno is the biggest loser now and will be considerably weakened by the time emergency is lifted in August. That's the price to pay for indecisiveness.

Fair Malaysian: It’s a sad day for the country, a result of incompetence and inconsistencies. Countries have conducted elections without the need to declare an emergency.

Hmmm: What if Umno pulls out completely from Perikatan Nasional (PN) today? Will the PM still have the mandate to rule, regardless of the emergency? What if everybody leaves PN and the PM is the only one left? Will this emergency still allow him to rule?

At what point does his support need to drop before he loses his power? Obviously, there must be a point where we can say that he has to resign because of lack of support, with or without the emergency.