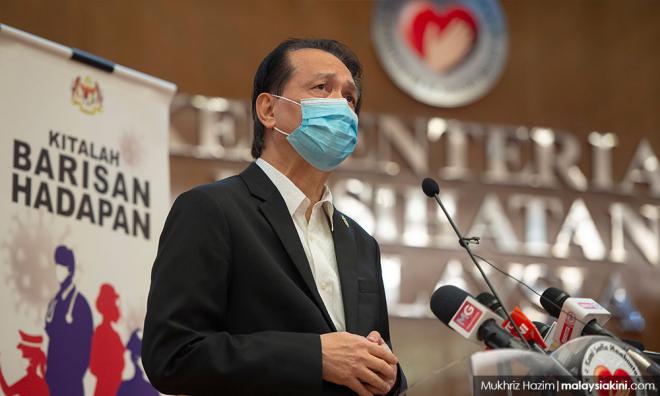 This projection was based on current Health Ministry data which Noor Hisham said could change after two weeks of movement control order (MCO).

"What's important is that we stay on the right track and adhere to the guidelines. Stay at home. If you have to go out, wear a mask, wash your hands and keep your distance. Hopefully, that will reduce new cases.

"In terms of flattening the curve, we expect to see it in 12 weeks. We will implement (the MCO) for two weeks. We'll see later if we need (to take further action).

"Based on the data, in May, we can flatten the curve in the country," he said.

Noor Hisham said this in response to a question on whether the Covid-19 infection curve could be flattened in two weeks.

The ministry believes that the trend in the number of daily cases that Malaysia is currently seeing may not go down in just two weeks of MCO.

However, Noor Hisham stressed, they are hoping to at least prevent the figure from increasing further.

"In my opinion, we may not be able to bring down the numbers in just two weeks. However, what we can do is to prevent the number of cases from going further up.

Noor Hisham said that the MCO would be followed by another conditional MCO period to achieve their target. A conditional MCO is a less severe form compared to the full MCO.

He did not commit to a fixed timeline of how long the MCO or conditional MCO would go. However, Noor Hisham did hint that the MCO may go up to four weeks if implemented in full swing this time around.

For the record, Malaysia sees a daily number of cases in the four figures, many times between 2,000 and 3,000 cases. The highest ever recorded at this juncture was yesterday, which was 3,309 cases.

Noor Hisham said that they are aiming to bring the number of cases down to 500 a day, so as to ease the burden of Malaysia's healthcare system.

Last week, he admitted that the healthcare system has come to its breaking point, where MOH struggles to cope with the number of patients.