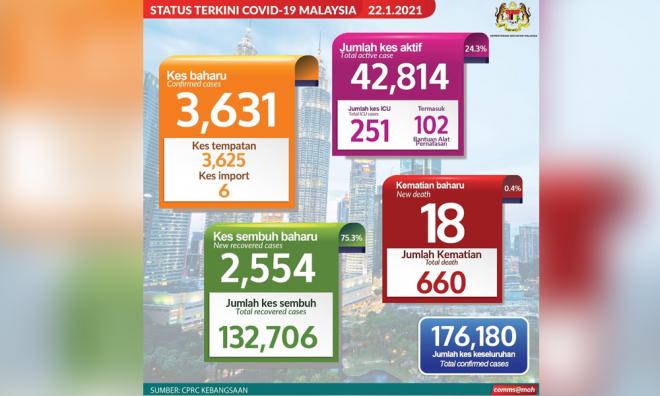 Covid-19 deaths hit new highs, and other news you may have missed

3. Insurance firms said there too many risks involved to fully insure Covid-19 treatment and said private hospitals have to step up and do their part.

4. Sarawak state cabinet members plan to appeal to the Yang di-Pertuan Agong to lift the emergency order in Sarawak.

5. A woman who was fined RM1,000 for not wearing a mask when exiting her car released CCTV footage disputing police's claim that there were others near her at the time.

6. A Bersatu Youth figure was arrested by the police on Wednesday for allegedly possessing a large amount of illicit drugs.

7. An Umno source claimed few of the party's MPs are willing to back a call for an emergency parliament session due to fear it would make the party look bad.

8. PKR's Nik Nazmi Nik Ahmad brushed off the defection of a handful of Gombak PKR members to Bersatu as a small minority.

9. A Universiti Teknologi Mara (UiTM) student defended their teacher for taking them on a study trip to the DAP headquarters in Kuala Lumpur in 2019.

11. Kedah Menteri Besar Muhammad Sanusi Mohd Nor continues to face pressure over the state's decision not to declare Thaipusam as an occasional holiday.