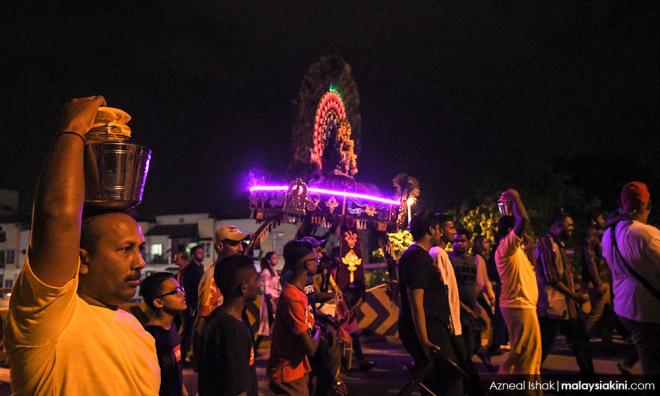 ADUN SPEAKS | I have recently observed that there is a certain degree of incongruity or dissonance between the National Security Council (NSC) and its relationship with the state, district and local governments.

This incongruity relates the perception that the federal agencies know best in terms of curbing the Covid-19 pandemic.

Once an agency, such as the NSC, comes out with the standard operating procedures (SOP), it is expected that the lower levels of governments just have to implement them without asking questions.

The fact that the state, district and local level governments might have better ideas of containing the pandemic probably never crossed the minds of the NSC's members.

The case of the Hindu religious festival, Thaipusam, best illustrates the dissonance between the know it all federal agency, the NSC, and the state governments.

It was the Penang government that first announced the cancellation of chariot processing for Thaipusam.

This was followed by Selangor and other states, a week before the National Security Council (NSC) decided to cancel the chariot procession.

Unlike the NSC, the Penang government under the Hindu Endowments Board (HEB) took very strict measures in cancelling the Thaipusam events.

Events such as prayers in temples, chariot procession, different forms of kavadi, mass haircut, coconut breaking, and the installation of panthals and stalls were disallowed.

Since Thaipusam spans three days, prayers have been barred and confined to the temple committees only.

In short, I have urged Hindus in Penang to pray at their homes to counter the Covid-19 pandemic.

The NSC in its initial circular on Thaipusam forbade chariot processions and other related events but allowed for milk Kavadi under strict SOP.

Even this we did not permit for Thaipusam in Penang.

But all of sudden, with less than one week to go for Thaipusam, NSC has made an about-turn on the chariot procession matter.

It has made an exception for Batu Caves Hindu temple (Sri Maha Mariamman Devasthanam) in allowing for a chariot procession with only ten persons.

Why this double standard?

Why allow the chariot procession for Batu Caves Hindu temple but not allow for other temples in the country.

If the NSC expects the people in this country to take the pandemic seriously, then it must be seen to be serious and a responsible agency.

With the rise in the Covid-19 cases, social and religious events must be controlled or regulated.

It cannot allow exceptions here and there to give the impression that we are not serious in flattening the pandemic curve.

Such irresponsible attitude is not going to help in the containment of the pandemic.

It is not too late in rescinding the latest directive, just because the Federal Territories Minister Annuar Muda made a special appeal on behalf of the irresponsible Batu Caves temple committee.

The inconsistency on the part of the NSC illustrates a larger problem that has been plaguing its over-centralisation for some time.

In other words, the NSC might not be really in touch with issues or matters at the state, district and local levels.

The top-down approach might be suitable during the pandemic's early stage but not at the present serious stage.

The case of Thaipusam festival best illustrates how the NSC simply failed to take account of the views or decisions at the state levels.

While the states wanted a tougher stand on the Thaipusam festival, the NSC without paying heed went ahead in allowing for certain events including the latest irresponsible decision to allow for a chariot procession in the Batu Caves temple.

P RAMASAMY is the state assemblyperson for Perai. He is also deputy chief minister (II) of Penang.