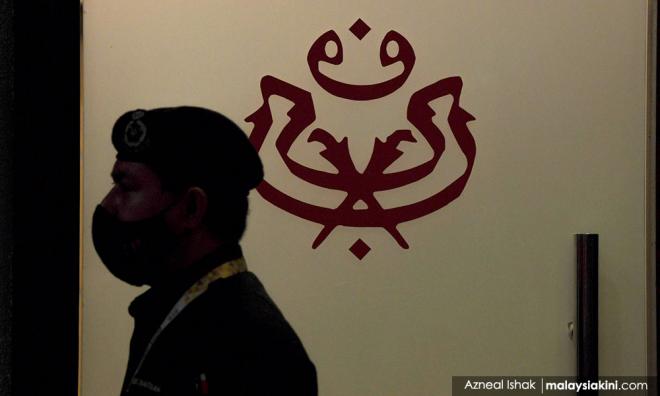 YOURSAY | ‘Where the money came from is perhaps a better question.’

What we know about Umno's 'secret' account and why it's important

BlueShark1548: During Dr Mahathir Mohamad’s time in 1988, Umno was deregistered and monies were allegedly held by three trustees. After Umno Baru was registered, what happened to the monies?

When Mahathir stepped down, he apparently handed about RM200 million cash to Abdullah Ahmad Badawi together with other Umno assets. So, did Badawi keep the cash under trustees or in secret accounts?

In early 2020, the account had RM193 million in cash and most of it was transferred to Kelab Prihatin Graduan, whose chairperson was listed as an Umno financial director.

1. How could millions be transferred from one party to another without Bank Negara taking any action or investigation? On the face of it, it looks like money laundering.

2. Which bank allowed Kelab Prihatin Graduan to open an account when it is not a registered body?

The Edge reported that there was however an association known as Kelab Graduan Prihatin, of which Shahrul Azuwar was stated to be an Umno financial director.

Again, when millions were transferred to this association, did the bank report those transactions involving the millions? Did Bank Negara query the transfer of millions to this body?

3. Was Zeti Akhtar Aziz, then Bank Negara governor, aware of these transactions?

4. What has happened to the money in Kelab Graduan Prihatin’s account? To whom was the money transferred? Shahrul Azuwar should comment on this or PDRM (Royal Malaysian Police) should summon him.

It looks like Umno's actions against Prime Minister Muhyiddin Yassin has led to the opening of this Pandora's box. The top leaders of Umno who knew about the secret Umno accounts should be held accountable.

Billythekid: Indeed, the deputy public prosecutor (DPP), who brought this up in court, knowingly or unknowingly opened the Pandora's box. I hope he will not be punished for this.

Now let’s see if the PN government will follow up on this because Umno is their partner and therefore Bersatu will be their 'partners in crime' if no action is taken by the ROS.

Coward: The DPP will not be punished. It's just possible that he unwittingly did the job for his political master several levels up, not knowing that he was a pawn in their game of thrones.

We all know how the ROS operates, it is not just a bureaucratic branch of the government whose job is to laboriously go through all registration requests, check them against existing rules and for those that do, registers them.

In true Malaysia Boleh spirit, it innovated to be the self-appointed overlord controlling the evolution of the political scene on behalf of their political masters.

Its actions are selective, and the hidden hand that wants to keep Umno on a leash just reveal their trump card: Toe the line, or we use ROS to set pressure on you.

Gaji Buta: Who is the holder of the account? If we know how much it had and where the money was transferred to - obviously the account number and name of holder are known - and the person or entity can be questioned. So, what is the mystery and what is the denial about?

Yoda: Where the money came from is perhaps a better question.

Jaycee: From RM193 million in the bank account to about RM2,700, with most of the money transferred to a doggy club. In addition, no audit was ever conducted.

This is the country we live in; where the government was and perhaps is still stealing the rakyat money as there is no accountability and or transparency thus far.

We really need to get rid of the entire lot and press the reset button.

Apa Nama: The ROS is empowered to deregister any society that wilfully contravenes any provisions under the Societies Act. This is applicable to a society that you and I established.

Tiger In The Jungle: Malaysia is being run by an allegedly legalised secret society holding over RM193 million unaudited, unaccounted funds obtained through illegal means. It boggles one’s mind to think how much money ran through this account since 1988. Mahathir, can you help us here?

Where is Bank Negara, IRB (Inland Revenue Board), ROS, MACC and PDRM? Is it a wonder that Mahathir wanted political donations kept private?

Umno leaders Musa Aman and Tengku Adnan Tengku Mansor couldn’t tell us where their donations came from. Do we now know how the late Jamaluddin Jarjis accumulated RM2.1 billion?

If these ‘mafia’ bosses, instead of stealing, helped the Malays, they would be well-off and truly progressed. Not that the Malays understand this anyway because at the rallying call of ‘agama, bangsa dan negara’, they will meekly fall in line.

Umno leaders know this. Malays don’t. They will still vote for them.

GoldenPhoenix2391: Now the ball is in ROS and IRB's court. If they don't act in accordance with the law, they will have practised double standards.

If a new government is voted in after the next elections, the officers responsible will have to answer for their failure to carry out their duties. Then, surely a radical overhaul of the civil service is due and the cancerous cells in the civil service will be excised.

JBond: These facts are facts, you can deny till your faces turn blue. If ROS doesn’t deregister Umno, then other political parties can now do the same thing and get away with it.

DAP, Amanah, PKR and all NGOs must now write to ROS telling it that Umno has breached the Societies Act. Give them seven days to respond otherwise, they must deregister Umno forthwith.

OrangeViper2887: Was the RM192 million a donation too? What happened to the money then?

Who had the authority to transfer the unaudited fund? MACC/PDRM should be hot on the trail. Don’t waste time on irrelevant police reports.

Malaysia Bharu: Indeed, this is an open and shut case for the ROS. A masterstroke by Prime Minister Muhyiddin Yassin?

But the bigger question is if only RM2,700 is left out of the RM193 million, what happened to the balance of RM192,997,300 that has disappeared? Who are the precipitants?

And since the account was not audited, what was the actual amount of this slush fund and who are the donors?

This matter may turn out to be criminal in nature. It should not be difficult to track the fund movement as CIMB bank should have the details.

I hope our PDRM and MACC will not tell us they are waiting for police reports to be made.