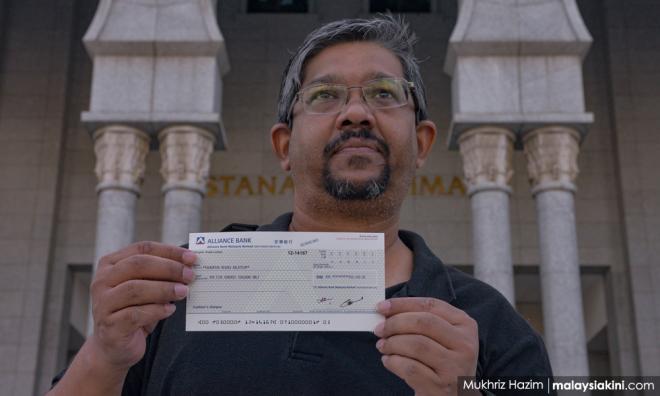 Malaysiakini has settled the RM500,000 fine for contempt of court imposed by the Federal Court last Friday over five readers' comments.

Its CEO Premesh Chandran paid the full amount at the Palace of Justice in Putrajaya this morning, following a successful fundraiser that exceeded the targeted amount by nearly RM250,000.

"We should thank our readers and supporters for their very generous support and contribution to Malaysiakini, for us to be able to settle this fine within three days.

"It is a lot of money but we are really very glad for all the support we have received," Premesh told KiniTV.

"It is very generous of our readers and supporters, especially during the Covid-19 pandemic when people are having a tough time out there," he added.

The news portal launched its fundraiser immediately after Court of Appeal president Rohana Yusof handed down the sentence, an amount more than double the RM200,000 fine sought by the prosecution. Malaysiakini was given three working days to pay the fine with the deadline being the end of business tomorrow.

An announcement was made to end collections after the RM500,000 sum was raised - in less than five hours - but support kept coming in and the final tally amounted to RM749,371 from 6,527 donors.

The remaining 207 donors contributed below RM10 each.

Commenting further, Premesh said the support will push Malaysiakini to continue its mission to report the news fairly, accurately, in a balanced way and hold the powers that be accountable.

"I think the donors gave it to support a free media and to defend the media so we will look at how we can maybe further that aim," he added.

The guilty verdict and fine attracted condemnation from groups championing freedom of expression and freedom of press, including those calling for a review of the country's contempt laws.