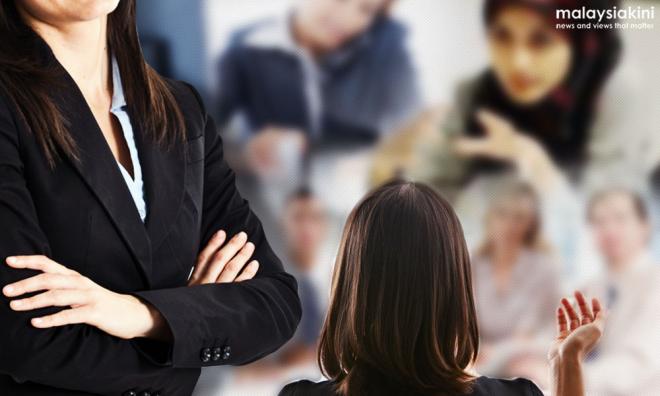 COMMENT | In 2007, a certain male MP insulted a female lawmaker in Parliament by making references to her menstrual cycle by utilising the word “bocor” (leak). This remains one of the most sexist remarks ever publicly made in Parliament.

Seven years later, in 2014, The Star published an article called “Top 10 Bung gaffes” which listed out the MP’s disrespectful remarks over the years.

Four out of 10 of his “gaffes” were sexist remarks aimed at his female colleagues in Parliament. Interestingly enough, the article led with the line “Parliament has been a more colourful place ever since Kinabatangan MP Bung Moktar Radin was elected in 1999”.

This sentence, seemingly so innocent, has an insidious effect - it portrays the MP as someone who contributes positively to Parliament, as opposed to a leader with a nasty trend of disrespecting his female colleagues.

Fast forward to 2020, an article was published in Utusan Malaysia about a single mother of seven, who was involved in a solicitation case.

The Malay daily decided not to observe ethical and professional standards and published her name, without giving much thought to the trauma that her children would endure as a result of the negative publicity.

This revelation opened the floodgates of public comments (mainly via social media) – much of which centred on victim-blaming. It quickly reached the point where people forgot that the mother did what she did to feed her hungry children.

The focus was on her so-called “crime”, rather than questioning why and/or how our national welfare system had left her and her family in the lurch.

Naming her in the mass media implied she did not deserve the respect of confidentiality and devalued her as a person. This, in turn, perpetuated the victim-blaming trend, already made worse by her revealed identity.

The role of the media is to share factual data in the form of news to inform and educate the public. It simultaneously reflects and shapes what are perceived to be the most relevant issues of the time.

The media has a powerful role and this power must be used responsibly. When you don’t portray women as persons of equal value to men in the news, you teach society that women are lesser than men.

By promoting certain perceptions and interpretations such as a sexist man makes Parliament more interesting, the media can reinforce existing power dynamics and make it difficult to challenge the status quo.

Public sentiment affects public policies and practices. This is clearly reflected in Malaysia.

But challenge this status quo we must, because by not doing so, the consequences would be too much to bear.

An example of this consequence is the snail’s pace progress of the tabling of the Sexual Harassment Bill which was drafted in 1990 by women’s groups, who have also been advocating for its passing into law ever since.

Thirty years on, sexual harassment has not only become more rampant but has evolved into new types of harassment as a result of the technological advancement of communication tools. Unfortunately, local legislation had not kept up with the times, and the bill remains just that - a bill.

Although the presentation of the media has evolved rapidly, ironically, media content representing women remains traditional and sexualised.

According to a report by the International Federation of Journalists in 2015, the most commonly agreed depiction, by both men and women, for women in media was as "family figures". This was followed by “victims”, “sexual objects”, and finally, “experts/leaders”.

Women were least depicted as heroes.

The Global Media Monitoring Project finds that women are also far less likely than men to be featured in the world’s news headlines and not so often as "spokespeople" or as "experts".

Women are often portrayed solely as homemakers and carers of the family, dependent on men, or as objects of male attention.

Last year, Batu Kawan MP Kasthuri Patto’s historic reading of a paper petition initiated by All Women's Action Society (Awam) to pass the Sexual Harassment Bill in December 2020 received way less coverage in the media as compared to the incident of an insulting remark about her skin tone by a male parliamentarian.

This lack of attention to the bill is considered even more inglorious in a year when gender-based violence became known as the pandemic within the pandemic due to its prevalence.

This choice to highlight news of male politicians humiliating and berating their female counterparts instead of turning their focus on rakyat-related issues has far-reaching ripple effects for us as a society, especially when these choices deter women from participating in politics.

No surprise, that in 2020, according to the World Bank, Malaysia only had 14.89 percent of women in Parliament, yet women make up almost 50 percent of the population.

How are we to reach the targeted 30 percent quota, when the media legitimises patriarchal behaviour that serves to reduce safe spaces for women in politics?

Imagine what a difference the media could make to our country, in terms of gender equality, economic progress and public health if they chose to change their narratives of women.

This International Women's Day, we, Awam, #choosetochallenge the media practitioners of Malaysia to get rid of their ingrained gender bias and utilise a fair portrayal of gender that is professional and ethical.

More than ever, Malaysia needs this change, not just for women, but for all of us, the rakyat.