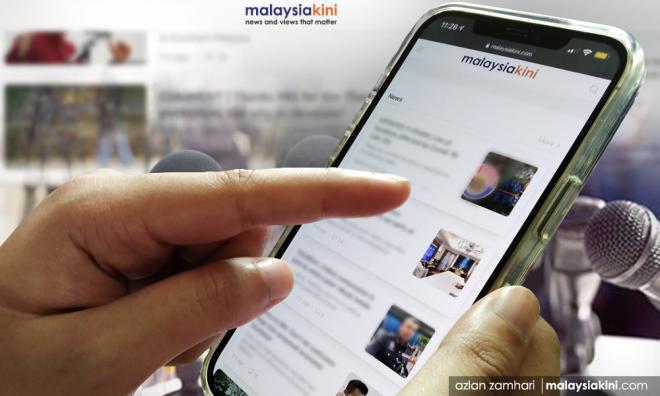 YOURSAY | 'Fake news is whatever the government says'

YOURSAY | 'Malaysia is veering fast towards a form of ethno-kleptocratic dictatorship.'

Gerard Lourdesamy: A health crisis is being used by an unelected government without a clear majority in Parliament to control and stifle freedom of expression, speech and of the press, and undermine, if not weaken, the Constitution.

Why is Perikatan Nasional (PN) so afraid of the rakyat questioning its handling of the Covid-19 pandemic and the emergency? The rulers should step in and put an end to this ‘fake’ emergency.

Dr Raman Letchumanan: Who decides that something is fake news? The arresting officer? The government? Does it require a police report before investigation and arrests?

So, any investigative report by media can be fake news if its intention is to bring out or verify the truth, or to bring the rakyat's grouses against the government.

I think to be on the safe side, Malaysiakini should send their investigative reports to the government for vetting before publication. Better still, just copy news from the MSM (mainstream media) or J-Kom (Community Communication Department).

Please wake me up when the emergency ends, Covid-19 is extinguished or the general election is called, whichever occurs last. There is too much ‘faking’ around.

Read Section IV of the Ordinance on evidence. A statement given by a person, who dies thereafter or is missing, is admissible. Any information or document obtained by whatever means (means illegally) is admissible. This is worse than the 'constructive knowledge' criteria used to convict Malaysiakini for contempt.

By the way, would any information given by people with fake names be considered fake news by default?

Public Transit Is Better Than Highways: The emergency is showing its true colours and there’s no denying that.

Prime Minister Muhyiddin Yassin’s lip service that this emergency has been only to “combat Covid-19” has been false even before it was declared, and this ‘fake news’ ordinance has just reinforced the notion further.

However, I do have some concerns over the said ordinance:

1. This ordinance allows law enforcement to conduct arrests and seizures without a warrant. Will this allow the executive to arrest anyone they don’t like or don’t agree with by using the police as a political vehicle to execute the said actions?

What are the legal restraints on this ordinance to prevent abuse of powers? This is because the inspector-general of police’s (IGP’s) statement that the police force is not a “political body” is not very reassuring.

2. What is the legal test for “fake news”? To what extent is a publication considered as “fake news”? How sure that the judiciary understands the difference between satire and “fake news”? Will internet memes mocking the government become “fake news” now?

3. How does the government plan to enforce the said ordinance against individuals who reside outside of the country?

Arresting foreigners based in Malaysia is easy, but what about individuals overseas? How does the government plan to enforce laws in a legal jurisdiction that it does not exercise in, like Singapore?

Or will the government of Malaysia try and get countries to agree with this legislation; or did the government even had the brilliant idea that nations would agree to this legation that, at its core, is designed to stifle freedom of press and censor speech?

4. The RM100,000 fine - how on earth are poor people going to foot that? As long as the ordinance is highly dependent on fines, poor people are the ones who will suffer while the rich walk free.

As a private citizen, there is practically nothing much that I can do, except to wait for the right minds to prevail in the judiciary and legal eagles to challenge this ordinance until the sun turns cold, if needed.

BrownImpala350: Fake news is whatever the government says.

Cogito Ergo Sum: This means we have to be very, very careful in making comments in this Malaysiakini forum.

The stench of Stalinism is pungent. Would you now be betting Muhyiddin will repeal his “Covid emergency” this August? PAS would be going insane with joy.

Now watch what Umno, Amanah, Warisan, Pejuang and PKR say and do and, for that matter, the DAP (don’t even expect a murmur from MCA, MIC and Gerakan).

GrayPanda9123: I wonder why His Majesty, our king, did not see through the PM's objective for the emergency. The first time he refused, but the second time he gave in.

Salvage Malaysia: I don’t know what to else to say. It’s like a government operating under siege. It just keeps giving more reasons to the rakyat to boot out this ridiculous government.

This punitive law against fake news is clearly open to interpretation and can be easily abused by any disreputable individuals in power.

Knucklehead: Umno did it some years ago (approved a ‘fake news’ law) and it was defeated by the people in GE14. Now PN is doing it again and will be defeated in GE15. Simple as that. Bring it on.