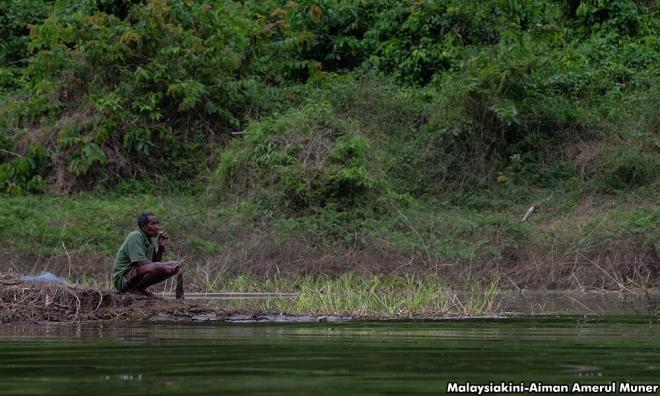 COMMENT | As it is, the Orang Asal (otherwise also known popularly or colloquially as the Orang Asli) are the aboriginal peoples of Malaysia – whose native pedigree stretches back thousands of years – and by default bestowed with the special position as enshrined in Article 153 of our Federal Constitution.

However, like their counterparts in many parts of the world, they remain marginalised and left behind in national development.

Article 8 of the Federal Constitution on equality before the law further provides under sub-article 5 that this doesn’t invalidate or prohibit (c) “any provision for the protection, well-being or advancement of the aboriginal peoples of the Malay Peninsula (including the reservation of land) or the reservation to aborigines of a reasonable proportion of suitable positions in the public service …”

The Orang Asal should not have to choose between legacy (ie, their traditional and customary way of life) and development. They should be entitled, constitutionally and politically, to retain both their habitat and ecosystem and at the same time enjoy the fruits of progress.

For far too long, the Orang Asal have been forced and cajoled to eke out an existence and a living on the margins and fringes of society or worse still in complete isolation in the heart of the jungle.

The question is, why can’t the Orang Asal enjoy the features of modern and sophisticated civilisation within their own so-called “natural” setting? In fact, based on anecdotal and empirical evidence, that’s what the Orang Asal want and aspire to.

It’s not only right and realistic too that modern and even state of the art infrastructure and facilities can co-exist within a forest and jungle environment. And this doesn’t in any way at all entail some form of deforestation. And the last thing that the Orang Asal need are logging and land clearance activities for oil palm plantations that devastate the ecosystem of the Orang Asal and doesn’t bring any financial or socio-economic benefits whatsoever to them.

After all, the geographically and topographically displaced Orang Asal are not then re-absorbed into the surrounding economic activities but pushed further and deeper into the jungle (that’s yet to be “ravaged by exploitative capitalism”).

Not only that, they are deprived of compensation when their land designated as tanah pusaka (literally, ancestral land) or tanah adat (literally, customary land) at common law (where it’s ungazetted as such under the Aboriginal Peoples’ Act, 1954 as amended in 1974) – are encroached.

And if the land is gazetted, it can only be revoked “through clear and unambiguous words of the legislature with payment of compensation. This is sui generis (ie, unique) right, forming a kind by itself, exempt from the National Land Code” (see Orang Asal Customary Land Rights by Alliff Benjamin Suhaimi of law firm Thomas Philip, May 2, 2019).

In the landmark case of Sagong bin Tasi & Ors v Kerajaan Negeri Selangor & Ors [2002], the High Court held that the Orang Asal were legally entitled at common law to be recognised as enjoying proprietary rights over the specific settlement they have occupied for (uninterrupted) generations. No statute law is capable of extinguishing the common law rights of the Orang Asal – in terms of their continuous use, access and enjoyment of the land – without due and proper process. Therefore, any purported eviction is deemed unlawful (null and void).

Hence, the claim of trespass was accordingly granted. And compensation had to be paid to them as per the Land Acquisition Act 1960, ie, in terms of proprietary (ownership) rights subject to Article 13, specifically (2) of the Federal Constitution, namely that, “[n]o law shall provide for the compulsory acquisition or use of property without adequate compensation”. The decision was upheld by the Court of Appeal.

Thus, Orang Asal land can only be lawfully taken away by their express consent as (beneficial) owners (including and extended to the deprivation of possession or use) which is normally tied to the – appropriate sum which could be higher than the market value as determined by the courts for the – compensation.

Only last month, the Orang Asal of Gua Musang (Kelantan) filed a summons in court for encroachment for the purpose of mining, logging, and agriculture. In addition to the private players concerned, the state authorities in the form of the Land and Mines Office, Forestry Department, the state government itself as well as the Department of Orang Asal Development (Jakoa) were also sued by the Orang Asal plaintiffs.

As reported on March 11, 2021, in their statement of claim, the plaintiffs “alleged that all the [fourteen] defendants had encroached on their ancestral land for mining, logging as well as oil palm and rubber tree plantations, which affected the daily livelihood of villagers living in the areas… these activities have severely damaged the crops… [and] also caused river pollution, resulting in the loss of the main water supply for villagers in the affected areas”.

Such incidents are common and happen because there’s no policy framework to guide the authorities when it comes to developing Orang Asal land.

What needs to be implemented, moving forward, is for a national development policy or strategy for the Orang Asal that aims to:

An action plan would probably firstly require the establishment of a Royal Commission that reports directly to the Yang di-Pertuan Agong and the Conference/Council of the Malay Rulers.

The findings of the report will be followed by the formulation of a policy framework as alluded above that seeks to promote the welfare of the Orang Asal from the legal (eg, a Special Court for Orang Asal Affairs), political (eg, parliamentary representation), economic (eg, agriculture and eco-tourism), socio-economic (eg, education and access to facilities) and environmental aspects (eg, tree replanting efforts). A White Paper could thereafter be presented in Parliament by a minister (which would entail Jakoa upgraded into a ministry).

The Orang Asal living in urban settings are well-poised to move together with the rest of society into the 21st century. But there needs to be more stepping up of efforts by both the federal and state governments to enable and empower Orang Asal to integrate into the economic mainstream.

In this regard, the Malaysia Digital Economy Corporation (Mdec) is playing its part by driving the outreach initiative. On March 21, 2021, Mdec concluded a pilot programme – #SayaDigital – aimed at boosting digital awareness and literacy among the B40 by reaching out to the Orang Asal (Temuan) community in Damansara Perdana, Bukit Lanjan (Selangor).

Fifty Orang Asal participants, including micro-entrepreneurs and 25 youths, were exposed to training in basic digital literacy in line with the country’s Shared Prosperity Vision (SPV) 2030 and the Malaysia Digital Economy Blueprint/MyDigital. The exposure and training include the Basic Digital Literacy Programme which encompasses e-communications, online banking and e-wallet and digital services applications.

For the Orang Asal living in rural/remote areas, they too need to be exposed to and be groomed in digital literacy. Instead of building telecommunications towers and laying fibre optic cables in areas that are normally inaccessible, Very Small Aperture Terminal (VSAT) that uses satellite (portable antenna/dish) technology to transmit Internet data should be deployed.

Such initiative was announced last year by the Deputy Communications and Multimedia Minister Zahidi Zainul Abidin to overcome physical barriers. At the same time, the Sarawak state government has allocated RM200 million to improve internet connectivity in 150 locations in rural Sarawak using VSAT to reduce the gap between the rural and urban areas.

A clean and potable water supply can also be easily provided. The Waterlily Solar Powered Water Purification System has been deployed in some Orang Asal settlements and its use should be expanded with the active intervention of Jakoa. The system is embodied by an installed cartridge heater for water purification purposes based on a distillation technique, with an automatic valve which fills up a tank and heats up the water.

Maintaining or striking the balance between “conservation” and development isn’t easy.

The government has a fiduciary responsibility towards the Orang Asal and their special position requires special attention such that any economic or environmental displacement must be accompanied by economic empowerment (eg, re-absorbed back as tenant farmers/smallholders) and suitable resettlement (eg, temporary location in a national park where they can serve as eco-tourists).

When it comes to logging, the timber companies should be responsible for replantation so that the land can be restored to its original state for resettlement.

The time has come to give greater recognition to the place and role of the Orang Asal as they too are equally as Malaysians as the rest of us.