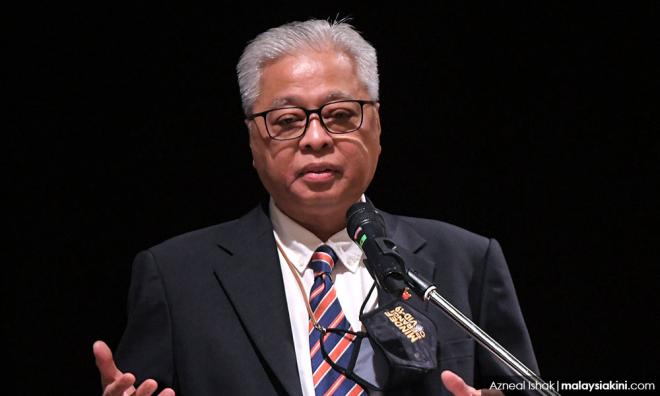 YOURSAY | ‘Change and revision are often necessary, but not on a daily basis.’

Vijay47: Defence Minister Ismail Sabri Yaakob, please bear in mind you are not addressing your party assembly, do not insult us further with your pathetic excuses to justify your changes to Covid-19 measures.

Change and revision are often necessary, but not on a daily basis. Every sunrise heralds a new day, but policies and strategies must reflect constancy if they are to inject some assurance into an increasingly alarmed public. Your fickle mind only continues to erode our confidence.

Outdoor sports activities were prohibited, only to be allowed the very next day; cross-border travel was permitted, and then immediately banned.

The Raya bazaars were okay since “SOP (standard operating procedure) was enforced at the entrances” and only after the damage had been wrought were they suddenly closed. Local MCO (movement control order) have now turned national.

The vaccination of senior citizens was supposed to follow after the frontliners, only to be replaced by Genting staff joining the favoured group and unbelievably, Petronas personnel also. Party leaders, of course, have no vaccination worry.

Tell me, Ismail Sabri, between the then and the now, what were the changing circumstances that demanded overnight red after the initial green? Remember, the required response to the virus is much more challenging than gulping turtle eggs.

Beman: "The situation three months ago was different from today so definitely the SOPs must be adapted according to the current situation," said Ismail Sabri.

How could allowing 15 visitors in one house in the first three days of Hari Raya be considered as adapting to the "current situation" at a time the number of new daily cases was in the thousands?

Coward: Stop insulting the public. We can tell the difference between ‘adapting’ and ‘flip-flopping’ because the whole thing was not properly planned.

If you keep living under the "tempurung" (coconut shell) insisting you are being agile instead of taking steps to change your own SOP on how to create SOP, then be prepared to face criticism.

Flip-flop means minor transgressions, screw-up means major disaster, like we are now in a major Covid-19 pandemic crisis. You and your government still have ‘maruah’ (dignity) to face the public.

If this is how the National Security Council (NSC) operates, I dread to think what happens when we are in a real war.

Unspin: Most countries use a tier or a colour-coding system to determine the SOP at each level.

In Malaysia, we have MCO, CMCO, RMCO, EMCO, TEMCO and AEMCO. (The Malay version is even more confusing: PKP, PKPB, PKPP, PKPD and PKPDB).

BaiJeBo: Defence minister, if you haven't realised yet, many of the SOPs have confused a substantial number of the public since last year - or rather from the early part of the first MCO last year - and not only in the past week. And, mind you, now this is the third MCO nationwide.

DalvinK: There are two main reasons for the flip-flop:

1) Ismail Sabri is not a health expert.

2) There is too much political interference (be it SOP tailored for the politicians such as three-day quarantine, or opening up because of wanting to please the rakyat).

Now this question begs an answer that we'll never get: What has the health minister been doing all this while? This SOP announcement, as well as the vaccination programme, should be under his portfolio!

Vox Populi: I fully defend the government for the implementation of the current national MCO. It is a very bold step in the right direction. Prime Minister Muhyiddin Yassin deserves full credit.

We should have stopped the flights from India earlier. We don’t want to end up like India. Even Singapore is struggling to contain the outbreak despite many Singaporeans having been vaccinated. We need to be patient in these difficult times and support the government.

Iiiizzzziiii: There is a difference between engaging in a dynamic response to a given situation and being indecisive.

Perhaps the latter would be most appropriate to describe the government approach to tackling the Covid-19 pandemic simply because the SOPs are so inconsistent that both the left and right hands are doing different things.

After almost one and a half years, the government has no clue as to how to respond in a decisive manner because it has adopted a reactionary response on a short-sighted basis. There is no long-term assessment and actions to be taken by the government to combat the spread of Covid-19.

Instead, the PN government had chosen to adopt decisions to ensure its stay in power no matter the cost to the nation or lives, as clearly demonstrated by a double standard in SOP where quarantine period is concerned - one for ministers and another for the public.

The PN government has been given so many opportunities to prove itself worthy to govern and lead, but its very action has betrayed itself and shown to the world its main concern is to ensure its grips on the seat of power.

Just A Malaysian: Something serious happened in the last two to three weeks that make the government enter into panic mode.

Health director-general (DG) Noor Hisham Abdullah gave some hint saying many more lethal and more infectious variants are circulating in the community. The virus is everywhere since 80 percent of new infections are not traced to any clusters.

It effectively means it is among us. Many are walking time bomb. Younger people are getting sicker than before and more are hospitalised than last year.

Criticised whatever we want of the government but the reality is Covid has turned worse in Malaysia. We all have to get behind all the measures set up to ensure we all survive through this deepening crisis. Fight the virus first as a nation. We can argue or assign blame later.

The Wakandan: Granted that the pandemic situation is dynamic. The minister needs to explain that clearly. The new generation today are well-informed lots unlike his. The over-70s may remember how they simply accepted doctor’s treatment in their era. Not so, today.

People would like to know why and then make their own decision. The Health DG should know about this. This is taught in medical school nowadays.

OrangePony5652: The government is not listening to the people's disgruntlement. There is a groundswell of discontentment now.

Livelihood is being affected due to job loss, unsustainable businesses are closing down due to low trade volume, petty traders and small and medium enterprises (SMEs) greatly affected by the erratic ill-thought-out SOPs.

The only people benefiting from this pandemic are the civil servants with the constant bonuses given out periodically and those businesses in direct benefit from the pandemic fallout.

The government better pay heed to the people's voices before it's too late.

Cyclonus: You mean with all the collected statistics from MySejahtera, resources and fancy artificial intelligence software HIDE (Hotspot Identification for Dynamic Engagement), you still weren't able to understand the situation?

This reminds me of a bunch of monkeys playing with a gun. Goofing around with things they don't understand and end up shooting their own foot.