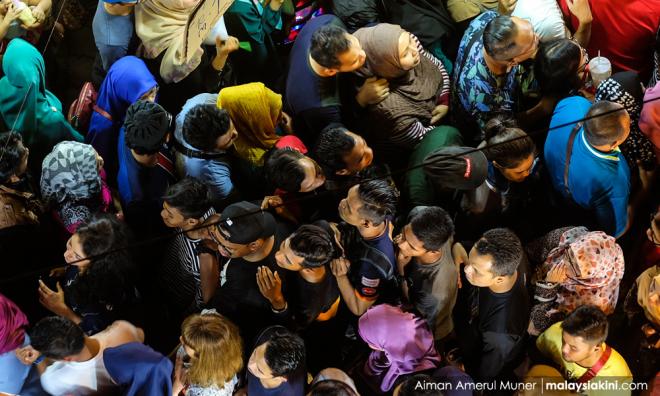 YOURSAY | ‘It is a tool for the well-connected to entrench their grip on Malaysia...’

50 years after NEP, a wealth and ethnic divide

Existential Turd: A noble idea without accountability as well as effective checks and balances is just an open invitation to abuse. And the New Economic Policy (NEP), along with all its iterations, was abused.

Several observations can be made. Implementation-wise, the NEP only benefited the well-connected. Maybe some marginal benefits went to those who deserved it, just to give the policy some semblance of respectability.

But the well-connected control all the channels of dissemination of benefits. The poor received some help and they were fed propaganda that if they chose a more meritocratic way of doing things, they would not even receive the meagre help they are getting. So they keep electing the same people who exploit them, general election after general election.

The flip side of the NEP coin are the minorities who benefit little from it. Yet, according to the chart in the article, they are still above the Malaysian average. Are the minorities superhuman? Or is it simply that the NEP is the wrong policy to help any particular group.

In the chart, Malays are lumped together with other bumiputera groups. We all know the indigenous groups in Malaysia are neglected. Their low wealth numbers may be pulling down the overall Malay numbers. The chart may be hiding some uncomfortable numbers.

So, no wonder the minorities think, NEP is a self-contradicting, racist and hypocritical policy. It is nothing but a tool for the well-connected to entrench their grip on all sectors of Malaysia.

OCT: Where is the transparency in the giving of aid, in contracts, permits, land, and everything that needs government permission?

In Malaysia, it seems like it’s not about having the best product or system, it’s about how high and how thick is your “cable” and network.

Take, for example, Cow-gate. A company with ties to a government politician can get a “soft loan” of hundreds of millions of ringgit to start the project. The money was dispensed and went to buying condos.

Other examples include the flying car project, or when the government appointed a consultant to buy a submarine but ending in a murder case. Government cronies are the true beneficiaries of the NEP. Look at former prime minister Najib Abdul Razak and his wife Rosmah Mansor.

Politicians want to be in the government not to serve the rakyat in a righteous way but to become millionaires and billionaires. Look at their palatial homes and lavish lifestyles. The NEP created a cartel of super-rich bumiputera politicians.

Harimau_Arif: Malaysia is a country blessed with a vast amount of natural resources and literally, you could grow almost anything with little effort. Yet, the income gap and wealth distribution are significantly uneven.

The NEP is no doubt a failure like most government programmes. It starts with good intentions but always fails due to poor execution/corruption. A programme like this needs to have a finite timeline and removed when a certain milestone is reached.

Not having a deadline is akin to not removing the training wheels on a bicycle - one will end up always depending on it. There shouldn’t be any excuse because Malaysia is the only country where affirmative action is for the majority.

Milshah: The story with regard to one entrepreneur, Safwan Saleh, is biased. The article tries to portray that the majority of Malays have suffered under the NEP and therefore the NEP has failed.

I know about the Safwan story because my story is similar. I, being an entrepreneur, also applied for a loan under Tekun for RM50,000, but was only approved for RM30,000. The reason for the reduction was not to victimise me. It was to teach me to use the money efficiently, as it is a loan, and not to be misused.

I required RM50,000 for operational costs but was only given RM30,000 for me to work hard. The loan officer explained they also wanted to see if I could make the monthly loan payment for RM30,000, for a start. They wanted to see if I can make good on the payments. If I am, and after I settled the RM30,000 loan, I could always apply for an increased amount.

The loan was not to make my life as an entrepreneur easy all the way, but to assist me a bit so that there will come a time when I don't need loans anymore to run my business.

I can understand why some want to have needs-based as compared to race-based, but report accordingly and not twist the facts to justify the aim of the article.

King Kong: “(Economist Muhammed Abdul Khalid) said among improvements that could be made to ensure equitable outcomes for all is to make scholarships available to underprivileged Malaysians regardless of race and to bar bumiputera-only scholarships for the wealthier among them.”

But my bumi friend was able to buy the bumi unit for a 15 percent discount whereas my Chinese friend had to buy it at normal price. They should remove this bumi quota for all people who don’t deserve it.

Cogito Ergo Sum: The culmination of the NEP is in this current “Malay Unity” government. It is an utter failure. It is ill-equipped to deal with the Covid-19 pandemic and the economic turmoil.

It is the Malays themselves who are being decimated by poor leadership and foolish leaders. In every which way, the NEP is a gross failure.

Artimus: As a non-bumi, the less said about the NEP, the better. Almost a third of my Form 5 schoolmates now reside in foreign countries, leaving a country they once called home and contributing their expertise and skill in making another country prosper.

I can't argue why they gave up on Malaysia. Fact is, they simply can't get the same opportunities or be treated equally whether in their career, social welfare, or basic human rights.

However, I am still grateful to have friends from all races who shared the same vision for Malaysia, and I surely hope we can change the country for the betterment of the next generation.

NEP still important as wealth concentrated in top 5pct - Malay commerce chamber
12 Jul 2021
COMMENT | NEP at 50: Looking back and moving on
12 Jul 2021
50 years after NEP, a wealth and ethnic divide
12 Jul 2021
YOURSAY | Untangling racism will require a system overhaul
13 May 2021
COMMENT | Malays not the only ones who must break silence on racist system
10 May 2021
Do we sit back and watch another generation suffer or do something?
9 May 2021