PKR advisor Anwar Ibrahim - the target of attacks at the recently concluded Umno general assembly for questioning the New Economic Policy (NEP) - has reaffirmed the opposition party's position that the policy be abandoned.

The former deputy premier described the Umno general assembly, which concluded last Friday, as a platform for 'fanning racial sentiments'.

He was speaking to reporters during a Hari Raya open house at his residence in mainland Penang's Kampung Cerok Tok Kun yesterday.

Anwar was attacked by Umno delegates for criticising the NEP, a race-based affirmative action policy which the ruling party considered as essential in eradicating poverty, in particular among rural Malays.

During the assembly, the prime minister and Umno president Abdullah Ahmad Badawi had said that the term 'NEP' should no longer be used although two of its prime objectives - the eradication of poverty and the restructuring of society to enable equal opportunity for all races - would be continued.

Anwar said the assembly was "a sham" and that the proceedings were racist in nature in an attempt to shore up grassroots Malay support for Umno. 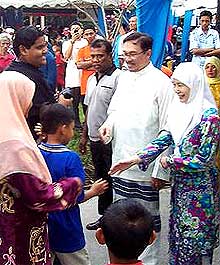 This, he said, was to deflect the people's attention away from more contentious issues such as the NEP, inter-faith dialogue and the state of the nation's economy.

"The New Economic Policy is now becoming a gimmick for those in power in Umno to virtually rob wealth opportunities for themselves," he added.

Anwar blamed Umno, in particular the Umno Youth, for convoluting the development agenda by creating scapegoats.

"Instead of debating on the matter, racial sentiments are blown up as though our economic problems are caused by the non-Malays, in particular the Chinese," he said. 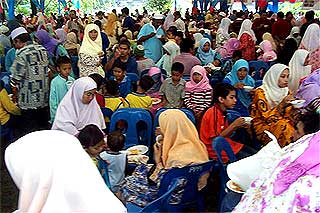 Anwar, who would be eligible to contest general elections in April 2008, offered PKR as a viable alternative party to Umno, one that would wean Malays off the NEP besides promoting dialogue of issues of religious tolerance should the party win control in the next elections.

To replace the NEP, Anwar has recently mooted a New Economic Agenda, which emphasises justice for all Malaysians and the eradicating poverty regardless of race.

"I do not have a shred of doubt that the economic polices that we (PKR) formulate when compared to the NEP are better for the majority of Malays, the majority of Chinese, Indians, Kadazan and so forth." 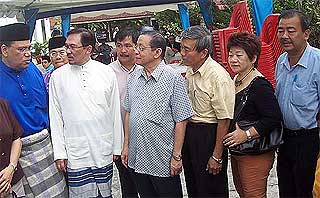 The following are extracts from Anwar Ibrahim's press conference.

The Umno general assembly was supposed to be an arena to raise issues that would help develop good economic polices. That did not happen. Granted, the economy is sluggish. But instead of debating on the matter, racial sentiments are blown as though our economic problems are caused by the non-Malays, in particular the Chinese.

This is not true. The problem with the economy lies with leadership, policies and programmes that are weak. Those who challenge the New Economic Policy are not just the Chinese. There are also the Malays, including myself, who were criticised during the assembly. For what?

Touching on the NEP, Anwar said that Umno Youth had to appear to be championing the rights of the Malays in order to shore up support:

You have APs (Approved Permits). You have Scomi. You have ECM Libra. This are the three that we know of. How about the dozens of others? This was not answered. As a result, I was not too surprised when several Umno Youth leaders fought to the very end to defend policies - policies which do not help the interest of the masses, but only a small select group of elites.

I would like to explain here that our agenda must be a Malaysian agenda. I do not have a shred of a doubt that the economic polices that we (PKR) formulate compared to the NEP are better for the majority Malays, the majority of Chinese, Indians, Kadazan and so forth. This does not mean when we abandon the NEP, the Malays would be left destitute and suffer abject poverty.

We want to stick by this issue because there have been several within the Umno leadership that are fanning racial sentiments so that the discussion on the NEP is sidelined. As though we are not yet ready to become a true Malaysian race. We have been independent for the past 50 years. It has been half a century since we've achieved independence.

Malays have their rights and we know to defend their rights requires a spirit of give and take. But we also know that the Chinese and the Indians are anak Malaysia and should be accorded rights as Malaysian citizens.

Does this contradict with Malay rights? I don't think so. I would never compromise on these rights. But I don't agree with those who use the NEP to rob the Malays of their wealth.

On the ongoing debate regarding the NEP, the ex-deputy premier said there is a growing number of Malays who are questioning the policy:

The entire polemics on the issue of the NEP is clearly an attempt to deflect attention from the basic fundamental issues of growth development and distributive justice. Those who are questioning the validity, the relevance and the wisdom to continue the NEP are not only the Chinese but also more concerned Malays.

I believe, the vast majority of Malays now begin to understand that the New Economic Policy is now becoming a gimmick for those in power in Umno to virtually rob wealth opportunities for themselves, their families and their cronies.

The vast majority of the Malays did not benefit from the APs, from Scomi, from ECM Libra, from Patrick Lim in Terengganu, et cetera, et cetera. So we must understand that we need to engage and continue this dialogue rationally. We need to promote a policy and agenda that would treat Malaysians as Malaysians. Yes, we are committed to defend the rights of the Malays, the marginalised and the poor.

We also here to defend the rights of the Chinese, the Indians, the Ibans and the Kadazans as Malaysians.

Why the hypocrisy that we are one family, we are one nation, warming up to each other, kita satu keluarga (we're one family), while at the same time, you promote this defeatist racist agenda?

That is why I am not totally surprised that a few of this rich Malays in Umno, including Umno Youth, are taking this up as a major battle. To attack the non-Malays, to threaten them because they want to defend, not Malay interests, but the interests of themselves, their families and their cronies.

I would openly challenge them to rationally debate this issue based on facts. Not based on racist propaganda. If anyone were to come and tell me, 'Anwar, we are not ready to talk about a Malaysian agenda', I would tell them that we have been independent for the last half a century. If you are not ready, you are not competent, you have to resign. We (PKR) have to have a new team of competent, fair-minded just Malaysians to take over the helm of this country.

Anwar also touched on the media freedom saying that PKR's responses to criticisms were never published:

This is important, but the problem is the media. It's like the North Korean media, except for a few notable media organisations. They (Umno) attack us, we reply, it's not published. They say we are anti-Malay. They say we betray the interests of the Malay.

The APs. Who robbed the most? Malay names. Large contracts. Malay names. If a sub-contract is not to the Chinese, it's to a Malay. So let's create a fair policy. Sudahlah penipuan ini . (Enough of this cheating).

We are not seeking to compromise to the point of 'Oh, let's give all the opportunities to the Chinese, let them live easy, let the Malays live in poverty.' No, what we want to do is create a policy for all Malaysian citizens. So that there would be nobody that is marginalised.

This is why I never want to answer personal attacks. I let it be. We need to address the root issues. Okay? Clear enough? Quote four lines lah (laughs).

Well, actually this is very important. I will appeal to you in the media, even if reports are not cleared by your editors, you have a duty to report. Because to me, this is not a narrow political agenda. This is not a Keadilan issue.

For me, we have reached a level where Malays, Chinese, Indians, Iban and Kadazan must take a stand.

This is an issue of the survival of Malaysia as a nation. It's not an political gimmick issue. I am personally surprised, even though I should not be, but I am, that an assembly (Umno's) is allowed to run its course and stupify the rakyat in this manner. You allowed full coverage from morning till night, and angled it the way it was angled as though people can be fooled.

Asked what his stand was on the setting up of an interfaith commission, a move recently rejected by the prime minister, Anwar said he supported dialogue over silence:

On the issue of interfaith dialogue, I think it's important. We have to have the trust and confidence in the constitution which guarantees the position of Islam in the federation and the protection of religious rights and freedom of belief and conscience for all non-Muslims, Christians, Buddhist, Hindus, et cetera.

Apparently there has been some misunderstanding, misperception. This has to be addressed. The prime minister suggested don't discuss this. 'These are sensitive (issues). We are not going to compromise,' he said.

What is so sensitive about talking about the people's basic rights? In what way are we compromising? In no way am I compromising my position as a Muslim. And in no way should you at all consider an attempt to compel others to accept our beliefs. But currently there is confusion.

And this has to be addressed. The problem with this country is that (even) after half a century of confusion, you say, 'Don't discuss'. You (the government) say 'In another five years, we'll discuss again'.

If in five years you have an Umno president as prime minister, the answer will be the same. But in five years, if we have a different party, then insya Allah , I think it will be resolved.