"It is the duty of the prison authorities to ensure the health and safety of those under their custody, a duty made onerous in cases where one is held without trial," he said in a statement today.

"The authorities must act on the advice of doctors and in cases where there is doubt, they must act and think in favour of the detainee," he added.

Murugesan is the latest among a chorus of voices that have called for Uthayakumar, a diabetic for the past 12 years, to be accorded proper medical attention. 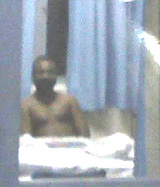 Uthayakumar is said to have been deprived of his medicine for the past month despite repeated requests to the director of Kamunting Prison where he is held.

Uthayakumar is among four other Hindraf leaders who were detained under the ISA on Dec 13 shortly after organising a mammoth rally in Kuala Lumpur on Nov 25 which saw some 30,000 Indians taking to the streets.

He was admitted to the Taiping hospital in Perak on April 7 after his sugar level rose to more than three times the normal level.

Discharged from the hospital on April 10 and taken back to the detention centre, his family members insisted that he was still unwell.

"Aliran wishes to emphasise that a detainee does not forfeit his right to medical care under whatever circumstance," said its president P Ramakrishnan in a statement.

"As a human being, he is entitled to receive medical attention like any other Malaysian and his family has a right to be notified when a detainee is hospitalised. This is something very basic in a civilised society," he stressed.

"Kamunting authorities need to be given an urgent course on human decency so that they will react as human beings and treat others under their care with dignity and compassion.

"So far their conduct has been disgraceful, deserving condemnation from the civilised international community," he added.