Three weeks after journalists crossed swords with the Parliament administration, the two sides have clashed again - this time over the length of skirts worn by female members of the press.

Several journalists have complained they were ticked off by security personnel for supposedly violating the Parliament’s dress code.

Female reporters, in particular, were incensed at being told that their skirts or shirt sleeves were too short.

According to one journalist, despite that her hem was beyond her knees, she was told this morning by security personnel to "pull down" her skirt.

Another said she was chastised because her sleeves were considered too short for Parliament.

Women, Family and Community Development Minister Dr Ng Yen Yen was concern over the perceived arbitrariness in the enforcement of the dress code.

“If such a matter was left merely for the security officers (to decide), we will have a lot of problems,” she told reporters in the Parliament lobby. 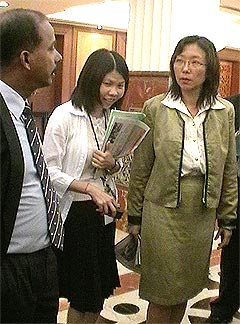 M Kulasegaran (DAP-Ipoh Barat) said there appeared to be a double standard in the enforcement of the dress code as parliamentarians are exempted.

“I'm surprised they only applied this to press people,” he told reporters.

Meanwhile, Kulasegaran’s colleague Teresa Kok (DAP-Seputeh) said Parliament is a place for the nation to debate issues and policies of great importance and not a place where “you look at how people dressed and what they wear.”

“As long as you don't bring guns or weapons to Parliament, you should be cleared,” said Kok.

After the meeting, he announced that all security personnel in Parliament would be told that the issue of dress code was none of their business.

“As long as you are decently dressed, it’s alright. It's not up to the (security) officers to decide what is decent or what is indecent. Their job is to ensure security - that's it,” said Nazri at a press conference. 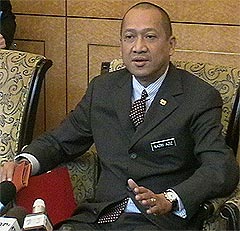 He said that so long as journalists and other visitors are not “wearing underwear and singlet”, they should be allowed into Parliament.

Nazri added that action would only be taken if MPs or members of the public have written in to complain about “indecent dressing”.

The minister also said there should not be any double standards between MPs and non-MPs.

“Does it mean if MPs go about naked that is alright? Tak boleh! (Cannot!) I cannot have such double standards,” he said.

According to Nazri, even male visitors wearing jeans should be allowed into Parliament as long as he is wearing a jacket and tie.

This is the second time that journalists had a run-in with the Parliament administration.

Last month, irate journalists boycotted events outside the parliamentary chambers after they were barred from the building’s lobby. The ban was however lifted the next day.