"I don't think we are going down that road; definitely not," Abdullah told Associated Press in an interview today. 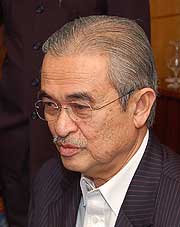 "Why should (protests) get out of hand? That would be very unbecoming of the party that intends to be the government of Malaysia - to take laws into their own hands and demonstrate as they wish."

There are fears that Anwar could be arrested in the coming days as the police wrapped up their investigation into a former aide’s allegation that he was sodomised by Anwar.

Abdullah said that the 23-year-old ex-aide, Mohd Saiful Bukhari Azlan, deserved justice as much as any other Malaysian.

"This man pleads for justice," Abdullah said. "We care about (Anwar) more than we care about this man? That is very odd. He needs justice; that is what he is crying for. We cannot ignore that."

The prime minister also hinted that Anwar was “bluffing” when the PKR de facto leader claimed that he would have enough defectors to form government in two months.

"Whether he bluffs or not (it seems) he wants to keep his popularity afloat all the time like a stock market share," said Abdullah.

However, Abdullah accused his political rival of trying to bribe ruling Barisan Nasional parliamentarians to defect.

"I've heard so much stories, many stories of his buying, tempting them with monetary offers to cross over to the opposition," said Abdullah.

"If it were true that money were being offered, to me it would be the worst form of corruption," he said.