The Human Rights Commission (Suhakam) has revealed three cases that raise searching questions about the Sabah office of the National Registration Department, as well as about border security.

Deputy chairperson Simon Sipaun provided details recorded from complainants, when he spoke to Malaysiakini by telephone in Kota Kinabalu.

A Filipino who had been arrested under the Internal Security Act (ISA) and deported a few years ago, had re-entered Sabah three weeks ago to collect his MyKad when informed it was ready.

He complained to Suhakam that the state NRD did not want to release the document because they found out that he had previously been detained under the ISA. 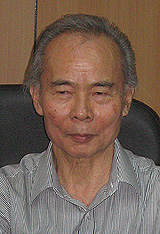 Asked by Suhakam officials how he managed to re-enter the state, he replied: “Entering Sabah is as easy as walking from CentrePoint (a shopping complex in Kota Kinabalu) to Kampung Air (across the road). I was not alone. There were 50 of us.”

Noted Sipaun (left) : “Here we have a Filipino who said he had connections in the state NRD and it was through them that he had obtained a MyKad. And (yet) we have locals who have been waiting for years to get their MyKad.

“There is an urgent need to strengthen enforcement along Sabah’s border. Saying that the border is long and porous is inexcusable. Sarawak has a even longer border with Indonesia and yet its problems with illegal immigrants are not as severe.”

A 33-year-old man born in Kampung Mandurian, Pitas, has yet to obtain his Mykad after waiting 12 years. Both his parents are locals and they have always lived in the same village. The complainant has a valid birth certificate issued by the state NRD.

A Filipino complainant was not satisfied after his children were not admitted to school. He has a MyKad issued by the state NRD. It indicates that he is a Malaysian, Muslim and bumiputera. His birth certificate shows that both his parents are Filipinos and non-Malaysians.

“He is not a citizen. His birth certificate states that he was born in Kampung Pirasan, Kota Marudu. But when Suhakam checked, there was no such village in Kota Marudu,” said Sipaun.

“This is very puzzling. Here is a person who should not have been issued with a MyKad at all because he is not a citizen. This is based on the documents that he has showed us.”

These are being exploited by illegal immigrants to obtain a MyKad and become citizens, Bumiputera and natives, after which they also get on the electoral rolls.

“The Registration of Birth and Death Ordinance 1948 of the state is the right procedure to use in registering late birth certificates,” said Sikayun.

“The Ordinance clearly provides a process of law in which a magistrate has to ascertain whether an applicant is a genuine citizen. The Ordinance exists and should be used.”

Sikayun suggested that the state NRD officials follow the mobile court on its rounds. The mobile court system, introduced in March, can help conduct inquiries of applicants for late birth certificates. The applicant should produce five witnesses, as provided for by law, including the village head and the midwife.

Newly-appointed state NRD director Abdul Jaffear Henry said he would have to check the law before commenting on the use of the state Ordinance for late registration of births.

“We try to follow the mobile courts to assist the rural folk to obtain their documents, but sometimes we are unable to make it because of (staff) shortage.”

The NRD in PutraJaya recently announced that it would no longer entertain applications for late registration of births in Sabah. This provoked an outcry against the ruling among ordinary people and politicians from both sides of the divide. 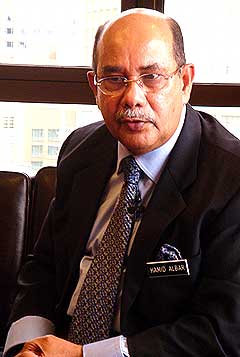 Instead, what awaits potential late registrants is the infamous green card (indicative of temporary residence) system which was abandoned a few years ago. It was revived earlier this month, according to Home Minister Syed Hamid Albar who pledged that “everyone in the country would be given an identity but not necessarily a Malaysian identity”.

Under the previous application of the law, the green card must be renewed every year. Holders are not allowed to leave the country and, should they leave, they will not be allowed back in. If they are allowed back in because no other country will accept them, they would be reduced to the status of a Special Pass holder.

In Sabah, the old green card holders are not allowed to venture even to other parts of Malaysia. Peninsular Malaysia and Sarawak are considered ‘foreign countries’ under the immigration law.

Red card (permanent resident) or MyPR holders can be away from the country for six months at a maximum but would have to obtain a re-entry permit before leaving. If they do not, they will be stripped of their MyPR upon their return and reduced to the status of a green card or Special Pass holder. Permanent residents are now allowed to work without a work permit.

For travel purposes, MyPR holders have to use the passport of their country of origin. If this is not possible - loss of citizenship status after 10 years is the main reason - the Immigration Department will issue them with a yellow Certificate of Identity or brown Emergency Certificate for the purposes of travel abroad.

Effectively, they are considered stateless people. The Emergency Certificate was also previously available to Malaysian citizens who wanted to leave the country at short notice.

The Special Pass allows a ‘foreigner’ - generally ‘Malaysians’ who did not have even the green card under the previous policy but who have returned - to remain in the country. The Special Pass has to be renewed every month and may be issued for periods less than one month.

The Home Ministry has set up a Special Unit within the NRD to clear the backlog of applications for citizenship and other personal documents in Sabah and Sarawak.

However, Syed Hamid Albar has warned that “the applications (backlog) cannot be simply approved as there are rules and regulations which have to be observed”.